It will be a certain relief to every right-minded man or woman who has followed the case to learn that the jury at New Bedford has not only acquitted Miss Lizzie Borden of the atrocious crime with which she was charged, but has done so with a promptness that was very significant.

The acquittal of the most unfortunate and cruelly persecuted woman was, by its promptness, in effect, a condemnation of the police authorities of Fall River and of the legal officers who secured the indictment and have conducted the trial . . . .

She has escaped the awful fate with which she was threatened, but the long imprisonment she has undergone, the intolerable suspense and anguish inflicted upon her, the outrageous injury to her feelings as a woman and as a daughter are chargeable directly to the police and legal authorities. That she should have been subjected to these is a shame to Massachusetts which the good sense of the jury in acquitting her only in part removes.

The theory of the prosecution seems to have been that, if it were possible that Miss Borden murdered her father and his wife, it must be inferred that she did murder them. It was held, practically, that if she could not be proved innocent, she must be taken to be guilty. We do not remember a case in a long time in which prosecution has so completely broken down, or in which the evidence has shown so clearly, not merely that the prisoner should not be convicted, that that there never should have been an indictment.

We are not surprised that the Fall River police should have fastened their suspicions upon Miss Borden. The town is not a large one. The police are of the usual inept and stupid and muddle-headed sort that such towns manage to get for themselves. There is nothing more merciless than the vanity of ignorant and untrained men charged with the detection of crime, in the face of a mystery that they cannot solve, and for the solution of which they feel responsible. The Fall River police needed a victim whose sacrifice should purge their force of the contempt that they felt they would incur if the murderer of the Bordens was not discovered, and the daughter was the nearest and most helpless. They pounced upon her.

. . . We cannot resist the feeling that their conduct in this matter was outrageous; that they were guilty of a barbarous wrong to an innocent woman and a gross injury to the community. And we hold it to be a misfortune that their victim has no legal recourse against them and no means of bringing them to account. Her acquittal is only a partial atonement for the wrong she has suffered.

Did Lizzie Axe for it?

The subject of this post is the title of a book that I recently read about the Borden Murders. Don't be thrown off by the punny title. It is a fairly objective analysis of the evidence of the case and the possible suspects along with some additional reference material. I highly recomend it for anyone interested in the case.
Did Lizzie Axe for it?

Try your local library. If they don't have it they can probably get it for you. If you want to purchase it you can probably also get it on amazon.com.
Did Lizzie Axe for it?

I'm pretty big into researching the murders. I've read several books, taken two tours of the house in Fall River, stayed over for a night in the John Morse room and am staying again on July 19th. After doing research I've come to some conclusions as to what possibly happened and who committed the murders. I find this piece of history interested and I love to talk about it. ------------------------- Missy Ella Ziehl
Borden Murders

Oh, so you had TWO tours in the house, and read several books. From now on I shall consult you for all unsolved crimes.
Borden Murders

Would love to hear what your thoughts are on this. I think everyone wants it to be someone other than Lizzie.
The legal teams.

An interesting aside to this famous murder case were who the legal combatants were. For the defense Lizzie Borde was represented by former Massachusetts Gov. George D. Robinson, he was assisted by Andrew V. Jennings. One of the prosecutors was William H. Moody who would go on to become U. S. Atty. General and a member of the U. S. Supreme Court. Clearly there were talented lawyers involved in this case.
Login

On this day in 1892, a prosperous banker and his wife were hacked to death with a hatchet in their Fall River home. Suspicion immediately focused on the man's unmarried 32-year-old daughter, Lizzie Borden. Basing their case entirely on circumstantial evidence, police indicted her for murder. Newspapers all over the country carried sensationalized, sometimes completely fabricated, stories. When she came to trial the following June, the nation was mesmerized by the spectacle of a Sunday-School-teaching maiden lady charged with committing such gruesome crimes. But the prosecution's case was badly flawed, and after a two-week trial, the jury found Lizzie Borden not guilty. She would never be free from suspicion, however, and lived the rest of her life as a social outcast.

But the Fall River Police Department announced that it would not pursue other leads; it considered the case closed. 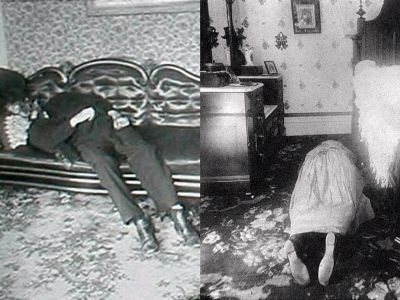 "Lizzie Borden took an ax and gave her mother 40 whacks. And when she saw what she had done, she gave her father 41." For over a century, this rhyme has perpetuated the notion of Lizzie Borden as a hatchet-wielding, cold-blooded murderer. Yet it took a jury less than an hour to find the 32-year-old Fall River woman not guilty.

There is no doubt that a horrible crime was committed. Lizzie's father, Andrew, and her stepmother, Abby, were killed in their own home by multiple blows with an axe; their skulls were crushed and mutilated to the point where they were barely recognizable. Astonishingly, given that it was between 9:30 and 11:00 am and that Lizzie and the family maid Bridget were both at home, no one either heard or saw anything amiss.

Within minutes of her father's murder, Lizzie entered the parlor and discovered his body. Distraught, she immediately sent Bridget for a doctor and called in a neighbor who summoned the police. Shortly afterwards, the neighbor discovered Mrs. Borden's body in an upstairs room.

"Lizzie Borden took an ax and gave her mother 40 whacks. And when she saw what she had done, she gave her father 41." 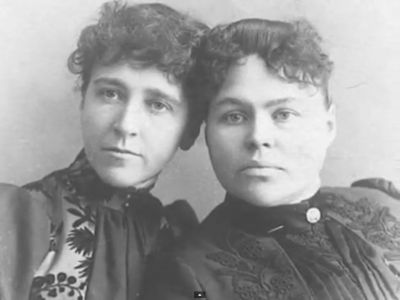 When the police arrived, they questioned Lizzie. She told them that Bridget had been upstairs washing windows and that she had gone to get something from the barn, returning a half-hour later to find her father's mutilated corpse. When the officer asked about her mother, the traumatized Lizzie snapped, "She is not my mother. She is my stepmother." From that moment on, Lizzie Borden was the chief — indeed, the only — suspect in the case.

According to police, she was a bitter, jealous daughter who hated her stepmother and killed her father to prevent him from changing his will to benefit his wife at the expense of his daughter. When a local druggist said that Lizzie Borden had tried unsuccessfully to purchase poison from him the day before the murders and a neighbor reported that she had seen Lizzie burning a dress several days after the murders, the police decided they had enough evidence to charge her.

The American public was enthralled by the case. Newspapers printed gruesome, often embroidered — or patently false — stories that transformed a respectable, churchgoing, socially-active young woman into a monstrous fiend. The contrast between the bloodiness of the acts and the genteel setting in which they took place added to the public's fascination. 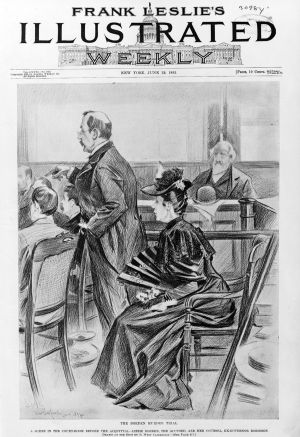 The prosecution's case began to unravel almost as soon as the trial opened. There was not a spot of blood on the dress Lizzie Borden was wearing when she was found at the blood-spattered murder scene. There were problems with the murder weapon, too, and Andrew Borden's personal attorney had no knowledge that his client had ever made a will.

The defense showed that the burned dress was a faded and paint-stained one that Lizzie's sister had advised her to get rid of; burning was the family's normal method of disposing of trash. The defendant swore under oath that the druggist was mistaken; she had not visited his shop and she had not requested poison from him. The state was unable to produce a convincing motive, a murder weapon, or an explanation for how the young woman could have committed the bloody murders and appeared only moments later wearing a spotless dress.

The state was unable to produce a convincing motive, a murder weapon, or an explanation for how the young woman could have committed the bloody murders and appeared only moments later wearing a spotless dress. 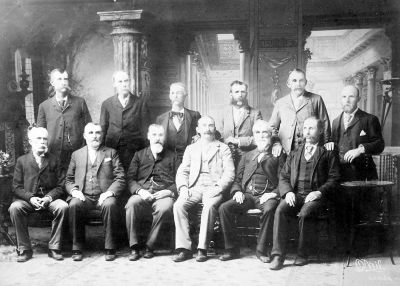 The verdict was greeted with jubilation in the courthouse, and most newspapers agreed that Lizzie Borden should never have been tried. But the Fall River Police Department announced that it would not pursue other leads; it considered the case closed. The implication was clear: the police believed the murderer had been acquitted.

The question remained: who did kill Andrew and Abby Borden? Doubts and rumors persisted, and the once respectable Miss Borden found herself ostracized by Fall River's polite society. For many years, August 4th gave the more sensational press the chance to sell papers by reviving the unsolved crime and raising questions about the case all over again. With each passing year, the jury's verdict seemed to fade into history. By the time she died in 1927, Lizzie Borden was firmly fixed in popular culture as the perpetrator of one of the nation's most notorious and mysterious crimes.

On this day in 1778, an intelligent and high-spirited beauty from Brookfield became the first woman to be executed in the new American republic. The 32-year-old's crime was indeed horrific: she had arranged for the...