From Lewis Latimer's unpublished autobiography, written in the third person:

At the close of the war [Lewis Latimer] returned to Boston and was discharged [from the Navy]…To get to work he went from place to place with no results. Finally a colored girl who took care of the office of some lady copyists (there were no typewriters then) was asked to recommend a colored boy as office boy, one "with a taste for drawing." She told [him] and [he] applied and got the place at three dollars a week. He believed then that whatever a man knew he had put in a book, so when he saw the man making drawings he watched to find out what books he used, then he went to a secondhand bookstore and got a book on drawing and soon had a set of drawing instruments. He then looked over the draughtsman's shoulder to see how he used his instruments, and practiced with them at home until he felt thoroughly master of them, then one day he asked the draughtsman to let him do some drawing for him. The man laughed at him but finally consented to look at what he could do on another piece of paper and to his surprise found that Lewis was a real draughtsman, so he let him do some of his work from time to time and one day the boss saw him at work and was so pleased that he let him work every day and gradually raised his wages so that from three dollars when he went to work he rose in eleven years to twenty dollars a week. The regular draughtsman got twenty-five, but he had left and Lewis gave the same work for five dollars a week less.

On this day in 1874, inventor Lewis Latimer received his first patent. The son of a Virginia couple who had escaped from slavery, he was born and raised in Chelsea. After a stint in the Union Army, Latimer began his career as an office boy in a Boston patent firm. Over 50 years later, he ended it as one of the "Edison Pioneers," a group of distinguished men who had helped establish the electric light industry. In between, Lewis Latimer was instrumental in helping Thomas Alva Edison develop the incandescent light bulb. He was awarded patents for ten of his own inventions and published a layman's guide to the once mysterious, now ubiquitous, electric light bulb.

There was nothing especially dramatic about the birth of Lewis Latimer in Chelsea, Massachusetts, in 1848. But the fact that he was born into freedom was the result of a dramatic flight from slavery.

His parents, George and Rebecca Latimer, were enslaved to a Virginia man named James Gray. Determined that their children would be born free, Rebecca convinced her light-skinned husband to pretend to be her master as they journeyed north. The pair reached Boston safely in October 1842, but their luck ran out almost immediately. A man who knew James Gray spotted them. Within a week Gray was in Boston and George Latimer was in jail.

Massachusetts abolitionists immediately began organizing to free him. After a month of meetings, protests, petitions (even a newspaper, the Latimer Journal and North Star, was published on his behalf), they succeeded. George Latimer gained his freedom. All the controversy seems to have persuaded Rebecca Latimer's master not to pursue her. The couple settled into Boston's vibrant abolitionist community.

The youngest of four children, Lewis Latimer grew up surrounded by people — women and men, blacks and whites — dedicated to the struggle to end slavery. His father was a respected member of Boston's abolitionist community; the anti-slavery newspaper The Liberator, referred to him as "the lion himself."

Lewis Latimer grew up surrounded by people — women and men, blacks and whites — dedicated to the struggle to end slavery.

Young Lewis spent his early years in Chelsea and Boston, attending school and assisting in his father's barbershop and with paper hanging jobs. All that changed when he was nine and, as he later wrote, "his father 'went out of his life.'" In 1857, the U.S. Supreme Court's Dred Scott decision cast a threatening cloud over the family. Because George Latimer had no documents to prove that he had been freed, he was in danger of being returned to slavery. Fearing for his own and his family's safety, he disappeared, leaving his wife and children in desperate financial straits.

His two brothers were sent to a state institution known as the Farm School, and his sister went to live with a friend. Lewis remained with his mother until she "got a chance to go to sea as a stewardess." Then he, too, was sent to the Farm School. After a period of time there, he and a brother and another boy who "like themselves pined for freedom" ran away. They managed the 84-mile trip to Boston in three days. Back in Boston, he worked as a domestic servant and in a law office.

When the Civil War broke out, Lewis's two older brothers joined the Union Army. In 1864, Lewis lied about his age and enlisted in the Navy. At the end of the war, he came home to Boston and got a job as an office boy at a firm that handled patent applications.

As he went about his work, he observed the draftsman making the detailed drawings required by the U.S. Patent Office. He bought a book on drafting, assembled a set of tools, and taught himself mechanical drawing. After learning to use T squares, triangles, and compasses, he was allowed to assist the draftsman. When the man left, Lewis was hired to take his place.

It was with Latimer's help that Bell beat the competition for the first patent on the telephone. 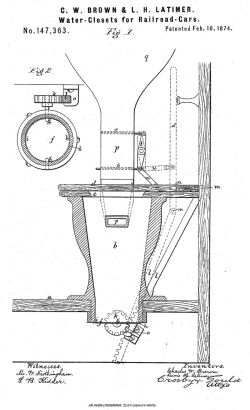 Over the next 11 years, he prepared the drawings and scale models inventors needed to submit with patent applications. One of those inventors was Alexander Graham Bell; it was with Latimer's help that he beat the competition for the first patent on the telephone. Working closely with so many inventors, Latimer acquired an excellent technical education and was introduced to a number of emerging technologies. He became expert in the technical and legal aspects of patenting a new idea.

Lewis Latimer recognized that there was money to be made in identifying a technical problem, devising a solution that would be useful to the general public, and securing a patent on the solution. He began conducting his own experiments.

The first one to result in a patent was a design for a special toilet system for trains. On February 10, 1874, the U.S. Patent Office issued Latimer and a fellow inventor Patent Number #147,363 for a toilet that emptied through a trap door activated by the lid. It is unknown if the device was ever used, but by 1874 Lewis Latimer had launched his own career as an inventor.

In 1880 he took a position as a draftsman at the U.S. Electric Lighting Company in Brooklyn. Here Latimer gathered a great deal of technical knowledge about an exciting new technology and a booming new industry — electric incandescent lighting.

During his four years with the Electric Lighting Company, Latimer had the chance to work on developing new light bulbs and lamps; several of the bulbs he patented would prove important to the industry. He also learned other aspects of the business, such as how to bring electricity to customers. He traveled in the United States and abroad supervising installation and production of electrical equipment.

"Every new workman who came into the office saw for the first time, a colored man making drawings . . ." 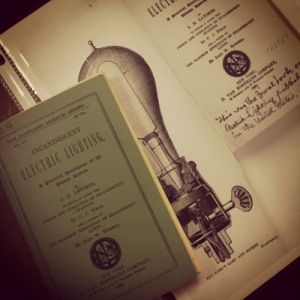 The early years of the electric industry were fiercely competitive. The chief rival of Latimer's employer was Thomas Alva Edison. In 1884, this genius with electricity invited Latimer to work for him. By then, Lewis Latimer was a highly skilled electrical engineer. He developed a carbon filament that made Edison's bulb commercial viable by improving the quality of light it shed and extending its life from minutes to hours.

Latimer became part of Edison's inner circle. Edison made him lead patent investigator and encouraged him to write a book on electric lighting, which was published as Incandescent Electric Lighting: A Practical Description of the Edison System in 1890. However, it was at the Edison Company that Latimer felt "his color began to be a drawback." Writing about himself in the third person, he recalled, "Every new workman who came into the office saw for the first time, a colored man making drawings; and as often as they came to work in the office they tried to pretend that he could not do their work."

All of his life, Lewis Latimer responded to prejudice by redoubling his efforts to improve himself. He was determined to become the kind of learned and cultured man whom whites could not dismiss. He painted, played the flute, wrote poetry and plays. He helped establish a Unitarian church in his predominantly white neighborhood. Largely self-educated himself, he taught technical drawing, mechanical engineering, and English to new immigrants. Having faced — and overcome — so much racial prejudice himself, he was a strong supporter of civil rights.

The Hall of Science at the Chelsea Public Library is a hands-on science program offered in conjunction with the Lewis H. Latimer Society.

Latimer's recollections and papers in the archives of Thomas A. Edison in the Rutgers University Library.

On this day in 1855, the case against Boston minister Theodore Parker came to trial. Charged with inciting an abolitionist riot, he defended himself by describing the horrors of slavery. He told the dramatic story...