In 1845, 105 black Nantucketers signed and sent the following petition to the General Court in Boston:

"The undersigned inhabitants of Nantucket respectfully present that they have between thirty five and forty children who are deprived of their right to equal instruction with other children in our Common Schools; and that they can have no instruction from the town, unless they submit to insults, and outrages upon their rights, quite equal to being imprisoned in a South Carolina jail; and for no other reason but…color.

They have applied to some of the first (best) lawyers in the Commonwealth, and are informed that they can get no redress, through the law as it is, they therefore pray that there may be some enactment, which will protect all children in their equal rights to the schools, against the majorities of School Committees, or of those who assemble in town meetings."

Quoted in African Americans on Martha's Vineyard and Nantucket: A History of People, Places and Events, ed. by Karen and Robert Hayden (Select Publications, 1999).

A few months later, the Massachusetts legislature passed House Bill 45, "An Act Concerning Public Schools, Remedy for the unlawful exclusion of a child from a public school institution." Any child, unlawfully excluded from public school instruction, in this Commonwealth, shall recover damages therefore, in an action on the case, to be brought in the name of said child, by his guardian or next friend, in any court of competent jurisdiction to try the same, against the city or town by which public school instruction is supported.

General Laws of the Commonwealth of Massachusetts from 1836 to 1853.

Northern Middlesex County has an interesting history of integrated schools. I suspect that much of this history is influenced by early anti-slavery families like the Varnums and Colburns. Dracut, MA The earliest example of an integrated public school that I have found is the 1755 Coburn Mission School in Dracut. Chelmsford, MA There are records of children of color attending schools in Chelmsford in the 1800s In the 1820s, Ralph Waldo Emerson taught in Chelmsford and there are accounts by his students recalling Emerson's strong anti-slavery positon. Lowell, MA From the incorportation of Lowell (once part of Chelmsford) as a town in 1826 there are records and historical accounts of children of color attending the public schools. In 1831 Lowell opened a co-educational high school. In the 1830s and early 1840s, there are records and accounts of children of color graduating from the Lowell High School. Question: Apparently Nantucket, Salem, and Boston did not integrate their schools until after this Massachusetts' 1845 Legislation. Were there other towns in Massachusetts like Dracut, Chelmsford, and Lowell that had integrated public schools before 1845?
Login

On this day in 1845, the Massachusetts legislature guaranteed that every child in the state would have access to a public school. One source of pressure on the lawmakers was a petition submitted by a group of black Nantucketers. Accustomed to the relative equality they enjoyed aboard whaling ships, the island's black residents were unwilling to accept inferior segregated schools for their children. Strong Quaker influence caused most white Nantucketers to be sympathetic to abolition, but this did not translate into support for racial equality. On the contrary, a majority of white islanders voted to prohibit school integration. African Americans on Nantucket began a boycott and petition campaign. After a bitter struggle, they succeeded in bringing about the desegregation of the island's public schools.

Although the decline and disappearance of the whaling industry brought economic hardship to the island and caused most of the black families to leave, the African Meeting House still stands. 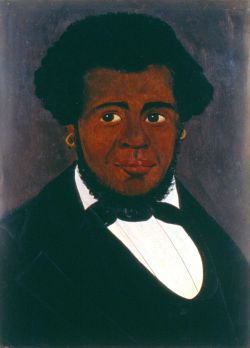 The history of Nantucket as the capital of American whaling helps explain why its schools were the first in Massachusetts to be desegregated as the result of legal action.

With readily available work on and around ships, Massachusetts port cities like Nantucket drew a sizable free black population during the colonial period. By the 1830s, when whaling was an immensely profitable enterprise, Nantucket's well-established black community was in a position to become part of it. Whaling vessels were hardly free of racial prejudice, but at sea, black men were judged by their skill, strength, and courage as well as by their color. The success and self-respect attained by the island's black whalers made them unwilling to tolerate the inferior, segregated schools their children were forced to attend.

African Americans had lived on Nantucket for generations, primarily in a neighborhood called "New Guinea." At the time of the Revolution, the island had about 100 black residents. By the 1830s fugitive and freed slaves had swelled that number to 500.

Absalom Boston, who captained an all-black crew on the whale ship Industry, was the community's leader. According to one historian, Boston "came from a whaling clan on the island of many generations . . . [He] was a man of substantial means." In 1824 he helped the black community build the African Meeting House. This small post-and-beam structure would serve as the church, town hall, and school for "New Guinea."

. . . when whaling was an immensely profitable enterprise, Nantucket's well-established black community was in a position to become part of it. 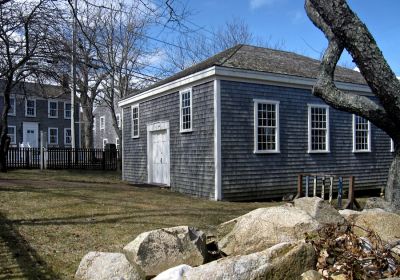 The African Meeting House was the center of black Nantucket in large part because the white community would have it no other way. White Nantucketers before 1845 overwhelmingly supported a segregated society. The relatively integrated world of the whaling ship was not replicated on land. Most white people rejected a mingling of the races, or "amalgamation." As a result, black students were not accepted in white schools on the island any more readily than they were on the mainland.

White Nantucketers had complicated attitudes towards black people. Many of them descended from Quakers who had been early opponents of slavery. In 1770 Quaker merchant William Rotch helped Prince Boston bring a successful suit for wages earned as a sailor, thus ending slavery on Nantucket. As abolitionism blossomed, Quakers were leaders in the movement. Quakers organized a series of anti-slavery conventions on the island; it was at one of these, in 1841, that Frederick Douglass, an eloquent fugitive slave from Maryland, first addressed an integrated audience. While most Nantucket Quakers were genuinely committed to ending slavery and some even favored political rights for African Americans, very few of them accepted the notion of social equality or racial integration.

The relatively integrated world of the whaling ship was not replicated on land.

In 1840 a gifted black student named Eunice Ross finished her studies at the African Meeting House and applied to the only high school on the island. Although she was found "amply qualified," the School Committee voted to deny her admission.

Two years later, with progressives now dominant on the committee, the island's schools were briefly de-segregated. It took only a day for the Town Meeting to override the decision and re-segregate the schools. The black community sent a strongly worded open letter to the local paper denouncing the prejudice of the white islanders.

In 1845 black leader Edward Pompey drew up a petition to the state legislature, calling for an end to school segregation.

In 1845 black leader Edward Pompey drew up a petition to the state legislature, calling for an end to school segregation. Over one hundred black people signed it. Some members of the white community responded with an anti-integration petition of their own, while others submitted petitions in support of desegregation. On March 25, 1845, the Massachusetts legislature passed House Bill 45, which guaranteed all Massachusetts children access to public education and gave plaintiffs standing to sue. Nantucket's schools remained segregated, but now Absalom Boston had the right to take legal action.

In 1846 the high school denied entrance to his daughter, Phebe Ann. Absalom Boston filed suit on behalf of both Phebe and Eunice Ross. With considerable financial means and political will, Captain Boston hired lawyers and made it clear that he intended to fight the matter in court. Faced with an expensive court battle and potential liability under the new law, the Town of Nantucket conceded. At the age of 24, Eunice Ross finally enrolled in the ninth grade. The school at the African Meeting House closed. Although the decline and disappearance of the whaling industry brought economic hardship to the island and caused most of the black families to leave, the African Meeting House still stands. Owned by the Museum of Afro-American History, it serves as a memorial to one of the state's most vibrant black communities and its hard-fought struggle against segregated schools.

The Museum of African American History has restored the African Meeting House on Nantucket; it is open to the public in July and August.

A Black History Trial is also available on Nantucket.

The curriculum unit, “African Americans in Massachusetts: Case Studies of Desegregation in 19th century Nantucket and Boston," contains a wealth of teaching resources. A brief history of the African Meeting House Mary Malloy, African Americans in the Maritime Trades: A Guide to Resources in New England

The Other Islanders: People Who Pulled Nantucket's Oars, by Frances Karttunen (Spinner Publications, 2005).

The African School and the Integration of Nantucket Public Schools, 1825-1847. by Barbara Linebaugh (Boston University, n.d.)