From Joseph Story's address at the consecration of Mount Auburn Cemetery

A rural cemetery seems to combine in itself all the advantages, which can be proposed to gratify human feelings, or tranquillize human fears; to secure the best religious influences, and to cherish all those associations, which cast a cheerful light over the darkness of the grave.

…Ascend but a few steps and what a change of scenery to surprise and delight us. We seem, as it were in an instant, to pass from the confines of death, to the bright and balmy regions of life. Below us flows the winding Charles with this rippling current, like the stream of time hastening to the ocean of eternity. In the distance, the City, at once the object of our admiration and our love, rears its proud eminences, its glittering spires, its lofty towers, its graceful mansions, its curling smoke, its crowded haunts of business and pleasure, which speak to the eye, and yet leave a noiseless loneliness in the ear….

Let us banish, then, the thought, that this is to be the abode of gloom, which will haunt the imagination by its terrors, or chill the heart by its solitude. Let us cultivate feelings and sentiments more worthy of ourselves… Here let the brave repose, who have died in cause of their country. Here let the statesman rest, who has achieved the victories of peace, not less renowned than war. Here let genius find a home... here, let the good, the merciful, the meek, the pure in heart, be congregated; for to them belongs an undying praise….

"An Address Delivered on the Dedication of the Cemetery at Mount Auburn, September 24, 1831" (Joseph and Edwin Buckingham, 1831).

On this day in 1831, the legislature granted the Massachusetts Horticultural Society permission to purchase land for use as an experimental garden and a rural cemetery. Located on the border of Cambridge and Watertown, the garden failed, but the cemetery became world famous. As the first rural cemetery in America, Mount Auburn pioneered the idea of burying the dead not in urban churchyards but in a beautifully designed, naturalistic landscape on the outskirts of the city. The idea caught on and eventually led to the creation of public parks in metropolitan areas. 180 years after the cemetery was consecrated, the dead are still being laid to rest along Mount Auburn's winding paths, in her wooded dells, and on her gentle hillsides.

Some thrifty Yankees complained that the fee was a waste when they could be buried for free in their local churchyard. 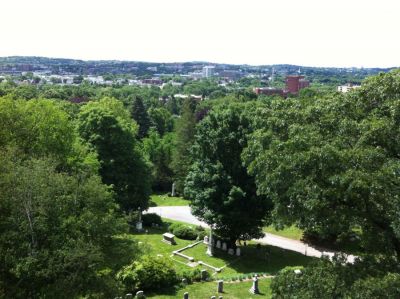 Boston physician Jacob Bigelow first broached the idea of a rural cemetery in 1825. He and other members of the city's elite were concerned that Boston's overcrowded graveyards, many of which were poorly maintained, were beginning to be a health hazard. Bigelow's solution — to create a peaceful oasis on the outskirts of the city — went against tradition. City residents were accustomed to burying their dead close by, in the local burying ground.

But times were changing, and Bigelow and his colleagues had models to follow. Père Lachaise, a beautifully landscaped cemetery, had opened just outside Paris in 1804. Across the channel, the English had discovered the charms of artificially created natural-looking landscapes, with features such as wooded glens, flower-ringed pools, and gentle hills. These trends reflected the romanticism of the era; painters, poets, and authors all used nature to elicit emotion.

In the Boston area, Ralph Waldo Emerson and his fellow Transcendentalists imbued nature with spiritual power; people sought out picturesque landscapes and panoramic vistas as pathways to God.

Dr. Bigelow went looking for a suitable spot to create his vision of a garden cemetery. He found it at Stone's Woods, almost 72 acres of rolling, wooded land on the border of Cambridge and Watertown. The site was a favorite haunt of Harvard undergraduates, who called the place "Sweet Auburn."

It had all the natural features a romantic could desire — deeply wooded glades and glens, rolling woodlands, and several large hills that offered panoramic views. 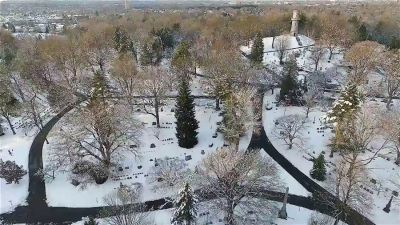 It had all the natural features a romantic could desire — deeply wooded glades and glens, rolling woodlands, and several large hills that offered panoramic views. The site had practical advantages, too. The 1794 West Boston Bridge, which crossed the Charles where the Longfellow Bridge does now, made the place easily accessible from Boston.

The owner was sympathetic to Bigelow's plan and agreed to sell the land at cost. Anticipating that tradition-bound Boston would resist the idea of a rural cemetery, Bigelow proposed that the Massachusetts Horticultural Society undertake the project. Part of the property would become a "garden cemetery," while the other part would be used as an experimental garden.

Early nineteenth century horticulturists were eager to develop plants that would thrive in New England's climate and soils. They were motivated both by a sense of national pride and a desire to promote commercial agriculture.

The Horticultural Society endorsed Bigelow's proposal and funded the $6,000 purchase by selling 100 15' x 20' lots for $60 each. While many affluent Boston families were eager to buy them, others were skeptical. Some thrifty Yankees complained that the fee was a waste when they could be buried for free in their local churchyard. Others worried about "Resurrection Men," who dug up corpses to sell on the black market for medical dissections. There was also a superstition that it was bad luck to transport the dead across water (in this case, the Charles River) before burial. But many simply disliked the distance that separated the site from their homes.

Newspapers and speeches extolled the virtues of the project: The garden cemetery would be an uplifting experience for those who visited. It would elevate the taste of the "middling sort" and so stabilize and improve society.

The MHS launched a public relations blitz that would make any modern ad executive proud. Newspapers and speeches extolled the virtues of the project: The garden cemetery would be an uplifting experience for those who visited. It would elevate the taste of the "middling sort" and so stabilize and improve society. It would provide religious inspiration. It would encourage physical exercise. It would be nothing short of a New Eden.

The campaign was a success. By late summer of 1831, the required number of lots had been sold. On September 24th, nearly 2,000 people attended the consecration of the cemetery.

Over the next few decades, the property was transformed into a landscape of gently curving paths, carefully tended dells, and ponds created out of marshy wetlands. Specimen trees and shrubs were planted, but the experimental garden never really developed. In 1835 Mt. Auburn Cemetery became a non-profit corporation separate from the Horticultural Society, and in return for 25% of the annual receipts from the sale of burial plots, it acquired title to the land. This financial arrangement continued until 1976 and helped fund the building of two horticultural halls in Boston, one of which still stands opposite Symphony Hall.

The cemetery's fame quickly spread around the nation and the world and made it an essential stop for visitors to Boston. In 1854 a tower in honor of George Washington was built atop the highest point on the property to give visitors an even more expansive view.

Although the cemetery did not record the religion, race, or ethnicity of those who bought plots, the names and languages on the gravestones show that the cemetery changed along with the city.

Although the cemetery did not record the religion, race, or ethnicity of those who bought plots, the names and languages on the gravestones show that the cemetery changed along with the city. African Americans began buying lots in the late 1800s. As the Armenian population of Watertown grew in the twentieth century, many members of that immigrant group chose to bury their dead in Mount Auburn.

Mount Auburn served as the model for rural cemeteries that soon graced every major American city. It is still an active cemetery, with hundreds of burials and cremations performed every year, as well as being one of the best birdwatching areas in eastern Massachusetts. It is also place that is much loved for the tapestry of art and nature that has been woven there over the past 175 years. Among the natural and architectural features are over 5,300 trees, representing more than 600 different varieties, many of them specimens of unusual beauty, size, and maturity.

Mount Auburn Cemetery is open to the public free of charge seven days a week.