IT'S THE END OF THE LINE FOR THE `EL' – GREEN LINE

TRACKS TO BE DEMOLISHED"

The last Green Line trolley rumbled down the half-mile stretch of elevated tracks snaking around the Fleet Center last night, as workers prepared to demolish the El….

"The El must die so that the Green Line may live," said Stefan Economou, who with colleague Ravi Jain planned to ride the last trolley on the elevated tracks last night. The two were the last to drive over the elevated Central Artery before that structure was closed and the southbound Interstate 93 Big Dig tunnel opened last December. "Sunlight will caress the asphalt of Causeway Street once again." The new underground route for that portion of the Green Line is part of a $325 million project designed to replace the deteriorating elevated tracks by the Fleet Center and unite the Orange and Green lines for a smoother transfer to North Station commuter rail. The new tracks underneath the Fleet Center are completed, and a new underground station for the Green Line at North Station, shared with the Orange Line, is set to open Monday.

…The old elevated tracks which date back to Fenway Park's creation in 1912 and are the last piece of elevated infrastructure left in Boston, after the demolition of the Central Artery and the relocation of the Orange Line down Washington Street,will be dismantled over the course of [next] year, said Joe Pesaturo, spokesman for the Massachusetts Bay Transportation Authority.

… The half-mile stretch of elevated Green Line tracks, winding from the corner of Causeway and Canal streets to Martha Road beside the Thomas P. O'Neil Federal Building, is the last major piece of elevated transportation infrastructure in the city…

Wjen the tracks came down it was like someone came along and took the roof off the neighborhood. While it is less noisy and certainly a lot cleaner Causeway Street lost it's distinct charm.
Missing the El

As a former Westender (Mclean St) I too miss that beautiful but ugly structure coursing the streets of Boston. When the West end was gone the city lost a lot of light. What should have opened the sky to parts of the city, the removal made our neighborhood dark and without life.
Orange Line Error

While demolition for the proposed route of I95 (which eventually became the new Orange Line) happened in the "mid-1960's," the El was not "torn down and replaced" until 1987-88.

"The original Green Line — the nation's oldest subway —had opened just a few years after the first El."

That should be opened "before" the first El. If you click on the "oldest subway" link in the article, you can easily see that the subway dates to 1897, while the El debuted in 1901.

While mistakes happen, a public educational resource really should be held to high standards. What's worse is failing to correct the mistakes (e.g., the assertion that the El was torn down in the mid 1960's rather than the 1980's).

On this day in 2004, Boston's last elevated train pulled into North Station. For over a century, Bostonians had avoided the congested streets below by riding trains carried on huge steel tracks overhead. When the El was built in 1901, people were thrilled to pay the five-cent fare to travel in mahogany-paneled cars from one shiny station to another. But over time city officials and most residents came to see the once-elegant El as a noisy eyesore. Gradually elevated lines were replaced with subways, and the tracks were demolished. The final run of the Green Line trolley on the last half-mile of elevated track marked a milestone in the modernization of the nation's oldest subway system, and, at the same time, the end of an era.

Disgruntled residents complained that it would be faster to walk across the stalled streetcars than it would be to wait for the cars to reach their destination. 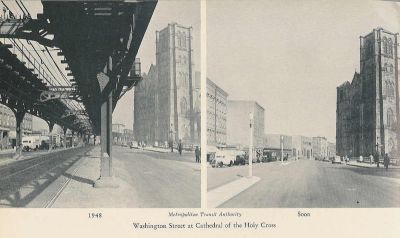 Unlike New York, Philadelphia, Washington, and newer cities to the west, Boston had not been laid out on a grid. Many of its streets had begun as paths that wound around hills and swamps. As Boston matured into a major metropolis in the nineteenth century, it faced the challenge of moving people and goods around a crowded peninsula. At mid-century, the city introduced horse-drawn streetcars; by the 1880s horsepower had been replaced by overhead electric lines. But neither innovation solved the real problem: Boston's streets were simply clogged with vehicles. Disgruntled residents complained that it would be faster to walk across the stalled streetcars than it would be to wait for the cars to reach their destination.

There seemed to be only one possible solution: get the trolleys off the streets. Numerous proposals were floated for different types of elevated railway technology, most of it untried and unproven. One idea for a monorail received such serious consideration in the 1880s that the inventor built a full-sized demonstration line near Lechmere Square. But a shortage of funds kept this and other schemes from getting off the ground.

In 1892 a special commission charged with studying the problem recommended that trolley routes be run above and below Boston's crowded streets. In 1894 the Massachusetts legislature approved the plan and authorized a subway tunnel to move traffic below the most congested part of Tremont St. and an elevated railway to run overhead through the rest of the city. A group of Boston businessmen, including Eben Jordan of Jordan Marsh, established the Boston Elevated Railway Company.

The huge steel structures, painted olive green, became part of the fabric of the city. 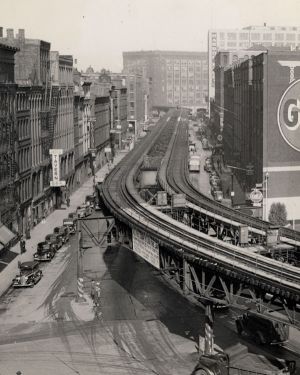 The groundbreaking ceremony was held on January 20, 1899. Over the next two-and-a-half years, the company constructed seven miles of elevated track, ten elevated stations, two large multilevel terminals, and a huge power-generating station and designed and acquired 150 cars to run on the new elevated tracks. The Main Line El ran from Dudley Square to Sullivan Square, right through the heart of the city.

June 10, 1901 was a day of great civic pride. Early in the morning eager riders gathered outside both the Sullivan Square and Dudley Square Terminals. At 5:00 am, the gates swung open; the crowds surged up the stairs and rushed onto the platforms. When the departure gongs sounded at 5:30 am, the jam-packed trains pulled out, inaugurating 86 years of elevated train service in Boston.

Bostonians soon became accustomed to the rumble of the El and the screech of brakes as trains rounded curves or entered stations. The huge steel structures, painted olive green, became part of the fabric of the city. The cars were painted red with silver gilt striping and slate gray roofs. The interiors were equally handsome with varnished African mahogany woodwork, sky-blue ceilings, bronze hardware, and seats upholstered in red and black. The stations were sheathed in burnished copper.

Ridership rose steadily throughout the first decades of the twentieth century. Gasoline and tire rationing during World War II increased use even more. By 1943 325,000 people a day squeezed aboard the Main Line El trains. By then, the Boston Elevated Railway provided service on 52 different streetcar lines. In 1947 the Metropolitan Transit Authority (MTA) took over operation of the El.

People grumbled that the huge overhead structures were a noisy, ugly eyesore, darkening and dividing the city.

By the late 1940s, the system was overcrowded, and the elevated railway fell out of favor. The public wanted subways. The original Green Line — the nation's oldest subway —had opened just a few years after the first El. As the city's subway system grew, Bostonians came to prefer underground to overhead transport. People grumbled that the huge overhead structures were a noisy, ugly eyesore, darkening and dividing the city.

In the 1960s city officials decided the Els should go. Beginning in the mid-1960s, the Orange Line El (the elevated railway that ran above the Washington Street corridor) was torn down and replaced by a subway line a quarter mile away.

The last section of elevated railway infrastructure was scheduled for demolition in June of 2004. On June 25th, the last Green Line train rumbled down the elevated tracks around what was then the Fleet Center. The MBTA acknowledged that "the elevated portion of the Green Line has served us well for close to 100 years," but like most Bostonians, transit officials believed the removal of the old El tracks helped beautify the city. At least a few residents, however, felt the loss of another part of Boston's historic character.

When Boston Rode the EL, by Frank Cheney and Anthony Mitchell Sammarco (Arcadia, 2000).

On this day in 1897, at 6 am, over 100 people crowded onto the first train to travel through a tunnel under downtown Boston. More than 100,000 people would take the three-and-a-half minute trip that...