It is manifestly true that no one — previous to the Gillette invention — had conceived the idea of producing a blade in which the purpose in view was to produce a blade that would be so cheap to manufacture that its cost to the consumer would permit of its being discarded when dull, thus avoiding the annoyance and difficulties of stropping and honing. Furthermore, it was true up to the time that the Gillette razor went on the market that there were hundreds of thousands of men who did not shave themselves, for the reason that they could not keep a razor in condition — they had not the knack or mechanical skill to strop and hone a razor, and there being no razor on the market that was of such low cost as to permit of the blade being discarded when dull and a new one substituted, they were obliged to be content to go to the barber, which involved large expense, annoyance and loss of time. It is to this fact that I the inventor attribute in large measure the instantaneous success of my razor, which success has few parallels in the history of invention. If the invention of this blade per se, could be considered in no other light than its having met the necessities of this large number of men who had never been able to afford the luxury of shaving themselves before, it must be conceded to be of the highest class of invention as would be the case if someone were to invent a machine to fly that would make it absolutely safe for anyone to use, where theretofore only experts [were able] to use [the] machines, and then only at great risk.

Quoted in King C. Gillette: The Man and His Wonderful Shaving Device, by Russell Adams (Little, Brown and Company, 1978).

Your moment on Gillette originally had a few paragraphs on his ideas for a beneficient company that took care of its employees in many ways. Up until recently, when it was sold to Procter & Gamble (Thank you James Kilts), Gillette employees were treated like family with many perks that other firms didn't offer. Doctor and nurses on site (not just for accidents, but for examinations and consultations) free, tax preparation free, generous retirement benefits, and much more. This man lived up to his name - he was a King!
King Gillette

One small correction: Gillette's home, where he described coming up with the idea for the safety razor while shaving, was in Brookline (2 Marion Terrace), not in Boston. - Ken Liss, Brookline Historical Society
Login

On this day in 1904, Boston-based inventor King Camp Gillette received a patent for an improved safety razor with a disposable blade. After almost 10 years of work, Gillette succeeded in mass-producing a sharp blade stamped from inexpensive sheet steel. He realized that profits lay in selling the razor for less than it cost to make and the disposable blades for more. His revolutionary idea has come to be known as the "Razor and Blades," or "loss leader," business model. Gillette was a marketing genius as well as a clever inventor. He introduced the practice of having professional athletes endorse a product and made sure that every American soldier went off to the First World War and returned home with a Gillette safety razor set.

In The Human Drift, published in 1894, Gillette proposed a collective, co-operative community; a single city powered by Niagara Falls would be so efficient that each resident would need to work only from age 25 to 30. 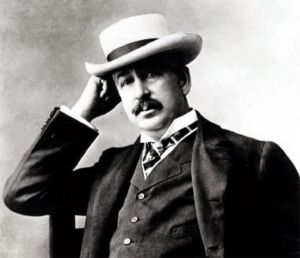 Born in 1855 in Wisconsin, King Camp Gillette was raised in Chicago. When the rest of the family moved to New York City following the Great Chicago Fire of 1871, the youngest Gillette son chose to remain in Chicago. He got a job with a hardware wholesaler and began what would be a legendary career as a traveling salesman and inventor. Gillette built his reputation in Chicago, London, and New York, before moving to Boston, the hub of his new sales territory, in 1894.

As a traveling salesman for the Crown Cork and Seal Company, Gillette learned that disposable items meant steady sales and healthy profits. Crown's founder had invented the first major disposable product — the bottle cap. He advised the young Gillette to think of a product "which once used, is thrown away, and the customer keeps coming back for more — and with every additional customer you get, you are building a foundation for profit." The search for his a profitable throwaway product of his own would lead to the invention of the Gillette disposable blade.

"As I stood there with the razor in my hand," he later remembered, "my eyes resting on it as lightly as a bird settling down on its nest — the Gillette razor was born." 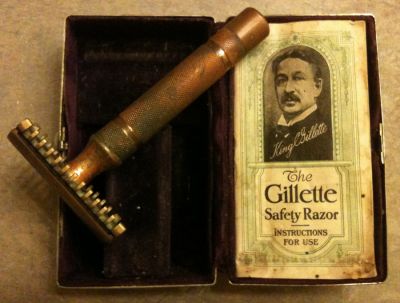 Shaving in the late nineteenth century was a time-consuming chore involving a straight-edge razor that needed regular stropping on a leather strap. Even the "hoe-style" safety razors developed in the 1870s had forged steel blades that required stropping and re-sharpening by a professional barber or cutler. At home in Boston one morning in 1895, King Gillette found himself with a dull blade in need of re-sharpening. "As I stood there with the razor in my hand," he later remembered, "my eyes resting on it as lightly as a bird settling down on its nest — the Gillette razor was born."

From the beginning, he envisioned the disposable razor blade as wafer-thin and flexible; it would be mass-produced and have a sharp edge on both sides. The biggest challenge was getting the edges sharp enough to deliver a clean shave. Engineers from the Massachusetts Institute of Technology said it could not be done with sheet steel. After six years of failed experiments, Gillette met William E. Nickerson, an MIT-trained engineer, who solved the problem. In 1901 Gillette and Nickerson founded the American Safety Razor Company and opened their first factory in Boston.

"Your baseball star . . . starts the day with a clean shave – and, like all self-reliant men, he shaves himself," the advertisements claimed.

In addition to pioneering the concept of disposability, Gillette developed new marketing techniques. He trademarked the use of his portrait and signature on the razor blade wrappers, making his face recognizable around the world by the 1920s. He introduced another innovation by signing Major League Baseball players to endorse Gillette razors. "Your baseball star . . . starts the day with a clean shave – and, like all self-reliant men, he shaves himself," the advertisements claimed.

World War I presented Gillette with another opportunity to increase sales. The company provided each serviceman with a field razor set that the government paid for; in 1918 alone, the U.S. military bought 3,500,000 Gillette razors. Tens of thousands of soldiers returned home from the war with government-issued Gillette razors and the habit of using disposable blades. In 1926 Gillette wrote proudly of his company's signature product, the safety razor, "There is no other article for individual use so universally known or widely distributed. In my travels, I have found it in the most northern town in Norway and in the heart of the Sahara Desert."

"There is no other article for individual use so universally known or widely distributed. In my travels, I have found it in the most northern town in Norway and in the heart of the Sahara Desert."

As his disposable razor blade was laying the foundation for a major American corporation, King Gillette himself was promoting the ideal of a social utopia. In The Human Drift, published in 1894, he proposed a collective, co-operative community; a single city powered by Niagara Falls would be so efficient that each resident would need to work only from age 25 to 30. He developed his ideas in two later books, including World Corporation, a prospectus for a company designed to fulfill his utopian vision. The company remained a dream.

Gillette's lasting impact has been his contribution to the development of a culture of disposability. The company he and William Nickerson founded became a corporate giant, with annual worldwide sales of $10 billion. On October 1, 2005, Cincinnati-based Procter & Gamble finalized its purchase of the Boston-based Gillette Company, creating the world's largest personal care and household products company.

On this day in 1874, inventor Lewis Latimer received his first patent. The son of a Virginia couple who had escaped from slavery, he was born and raised in Chelsea. After a stint in the...

On this day in 1844, after a decade of hardship and perseverance, Charles Goodyear received a patent for vulcanized rubber. The first boots and clothing made from rubber had performed poorly in the American environment....