Jack Kerouac was born in Lowell, Mass., on March 12, 1922, the son of a French-Canadian printer. He spoke French before he spoke English and still had an accent when he made up his mind while still in high school to be a major American writer. But it was as a football player, a fast, agile fullback, that he first won any kind of recognition. In 1939 he entered Horace Mann School in the Riverdale section of the Bronx, with the promise of a football scholarship to Columbia University if he could prove himself academically. His football career ended in spring practice of his freshman year when the coach, Lou Little…told his young fullback to stop malingering after he was injured on a play. The injury, as Mr. Kerouac told the story, was a broken leg.

Giving up football cost him his scholarship to Columbia, but World War II would have interrupted his studies in any case. He served first in the merchant marine, then briefly in the Navy, from which he was discharged as a "schizoid personality." It was immediately after the war that he had the experiences that shaped him decisively as a writer. He returned to New York and became close to Allen Ginsberg, then a Columbia undergraduate, and William Burroughs, the scion of a wealthy St. Louise family. Mr. Kerouac was later to give them the titles of their best-known works – "Howl" and "Naked Lunch."

Kerouac in Baseball Hall of Fame

Summarized from AP: A bobble-head doll of Beat Generation author Jack Kerouac created as a promotion by the minor-league Lowell Spinners joined the collection at the Baseball Hall of Fame Wednesday. Kerouac is believed to be the first literary figure so honored. On Aug. 21, 2003, fans began lining up 7 1/2 hours before the minor-league Lowell Spinners game where 1,000 of the dolls were handed out. The demand forced the team to create 500 additional dolls, raising more than $10,000 for Jack Kerouac scholarships.
still read

The last paragraph is an overstatement. "Dharma Bums" is still in print and several years ago his "San Francisco Blues" was re-released for a $1. So, more of his work is read than "On the Road," but "On the Road" overshadows all his other work.
still read

"Of Kerouac's 14 books, only On the Road is read today. " This is patently untrue. At the very least "Dharma Bums" , "Desolation Angels", "The Subterraneans", and "Big Sur" are still very popular and widely read. I strongly suggest updating this post.
still read

I altered this slightly, to account for the fact that his other titles are still enjoyed today.
still read

The audio doesn't match up with the paragraph! Town and Country is said but The Town and The City is written in the paragraph. On the road is most read is what appears in the paragraph, but the old audio says "Only "on the road" is read today. Time to update and sync!
Typos

"Merchant Marine" - not "Marines" "Penquin" should be "Penguin"
Login

On this day in 1948, Lowell native Jack Kerouac happily noted in his diary that he had written 2500 words. If he could keep up this pace, he would finish his first novel in a matter of weeks. The highly autobiographical The Town and the City was published in 1950, the same year he began writing On the Road, the novel that earned him the title "Father of the Beat Generation." By the time he died at the age of 47 Jack Kerouac had published 14 books. On the Road is Kerouac's most-read work today; it is widely considered one of the most important and influential American novels of the twentieth century, and Jack Kerouac is celebrated as one of Lowell's favorite sons.

Over a period of three weeks in the spring of 1950, Kerouac typed one, unbroken paragraph about his travels on ten 12-foot rolls of paper that he later taped together. 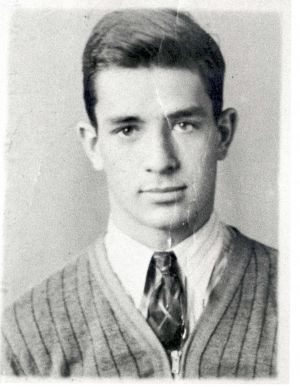 In the spring of 1948, 21-year-old Jack Kerouac struggled to complete his first novel, a mammoth work of 12,000 manuscript pages that he had wrestled with for over two years. In the fall of 1947 the Lowell youth began recording the number of words he wrote each day in a "writing log."

As the months wore on the writing began to get easier. On Friday, November 7th Kerouac noted in his journal, "2500 words today in a few hours. This may be it — freedom. And mastery! — so long denied me in my long mournful years of work . . . Not that it's easier, it's only more myself." By March 23, 1948 an upbeat Kerouac estimated that at his current rate he could complete his 360,000-word project in the next two months. In a jaunty journal entry he wrote: "Now if I can only get a dime for each one of those words I'll buy a farm in Colorado and write another book."

Kerouac did not buy a farm in Colorado, but he did write another book, On the Road, one of the most important American novels of the twentieth century. Kerouac spent several years crisscrossing the United States on a bohemian odyssey with his friend, Neal Cassady. As he traveled, he filled his notebooks with his observations of everyday American life.

Over a period of three weeks in the spring of 1950, Kerouac typed one, unbroken paragraph about his travels on ten 12-foot rolls of paper that he later taped together. For 56 years, this original, unedited version of the novel remained unpublished, accessible only to scholars. 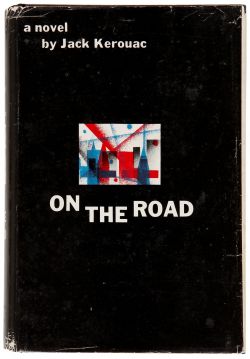 Kerouac spent the next six years revising the book. When On the Road was published in 1957, a New York Times reviewer was quick to describe it as "an historic occasion." Kerouac's tale of two friends on a mad quest to find meaning through the sensuous pursuit of drink, sex, speed, jazz, and mysticism quickly became the bible of the restless post-war "Beat" generation.

Jack Kerouac was born in 1922, the son of French Canadian immigrants to the Merrimack Valley. His mother was a devout Catholic. Although he became deeply involved in practicing and popularizing Buddhism, he always considered himself a Catholic. His first language was Quebecois; learning English as a second language gave the young Kerouac an appreciation for the pliability of words.

In a brief "resume" of his life that he included in the beginning of his book Lonesome Traveler, Kerouac described his childhood as "beautiful" he "roamed fields and riverbanks day and night, wrote little novels in my room. . . invented horse-racing and baseball and football worlds . . . ."

In reality, he grew up in a working-class ethnic neighborhood in an industrial city. His older brother — idolized by his parents — died tragically when Jack Kerouac was four. The death traumatized the family and left Jack with a lifelong sense of being unable to meet his parents' needs or expectations. The Kerouacs discouraged their son's dreams of writing as impractical and unpromising.

Kerouac described his childhood as "beautiful" he "roamed fields and riverbanks day and night, wrote little novels in my room. . ."

Kerouac turned his energies to sports and excelled at baseball, track, and football. A star athlete at Lowell High School, he received a scholarship to Columbia University. A broken leg ended Kerouac's athletic career when he was still a freshman, and he drifted in and out of Columbia for several years, leaving without a degree.

During World War II he served in the Merchant Marines and the Navy. After the war he returned to New York City and reconnected with friends from his college days, including the novelist William Burroughs and the poet Allen Ginsberg.

These men and women were well aware that their values were completely at odds with post-war materialism, the growing military-industrial state, and the rampant social conformism of 1950s society. They took to calling themselves and other young people who shared their "outsider" status the "Beats."

In 1946 Kerouac met Neal Cassady, a man who lived his life in a "mad rush," a restless search for sensory experiences and for an undefined mystical "it." The two traveled the country together, and their shared adventures formed the basis of Kerouac's second and greatest novel, On the Road. Kerouac said he wanted to write about "the mad ones, the ones who are mad to live, mad to talk, mad to be saved, desirous of everything at the same time."

The best known writer of the "Beat" generation, Jack Kerouac eventually wrote more than a dozen books. Young people were especially drawn to his work. Many established literary critics complained that his books had little or no plot and that his characters had no moral values. Others, such as the New York Times Gilbert Millstein, praised Kerouac's prose and heralded him as the voice of a generation searching for belief. "The 'Beat Generation' was born disillusioned," he wrote in 1958; "it takes for granted the imminence of war, the barrenness of politics and the hostility of the rest of society . . . It does not know what refuge it is seeking, but it is seeking."

. . . he wanted to write about "the mad ones, the ones who are mad to live, mad to talk, mad to be saved, desirous of everything at the same time."

Unnerved by the media spotlight and the extraordinary adulation of his readers, Kerouac spent more and more time at his childhood home. By 1966, he had returned to Lowell with his third wife to live with and care for his ailing mother.

In Lonesome Traveler, he concluded his "resume" by noting, "am actually not 'Beat' but strange solitary crazy Catholic mystic . . . Final plans: hermitage in the woods, quiet writing of old age, mellow hopes of Paradise (which comes to everybody anyway)." It did not turn out that way. Jack Kerouac died in 1969 at the age of 47 from a hemorrhage suffered in a drunken bar fight.

In June of 1988, Lowell held a week-long festival with poetry readings by Allen Ginsberg and others. The city dedicated the Kerouac Commemorative, a granite monument in the shape of a cross and arrow made up of eight three-sided panels, each etched with passages from Kerouac's work.Of Kerouac's 14 books, On the Road is still the most widely read today. It has sold over 3,500,000 copies and remains popular more than 50 years after it was written. In 2001 the scroll on which it was first typed sold at auction for $2,400,000; the money went to settle his estate's debts and the scroll went on a national tour, which included a stop in Lowell in the summer of 2007. In 2006 Viking Penquin announced that it would publish the original, unedited draft for the first time.

The Jack Kerouac Commemorative is located in Kerouac Park on Bridge Street in downtown Lowell.

Center for Lowell History The Lowell National Historic Park website has information on Kerouac’s life in Lowell, the commemorative monument, and the annual three-day “Lowell Celebrates Kerouac” event. Kerouac liked his work to be read, or even sung, aloud. After "On the Road" made him famous, he appeared in jazz clubs in New York and recorded three albums, parts of which are available online. Today In Literature online archive

The Crucible Opens on Broadway

On this day in 1953, Arthur Miller's play The Crucible opened on Broadway. Four years after winning the Pulitzer Prize for Death of a Salesman, Miller had written a far more controversial play. Set in...