From The Boston Herald Traveler (1947)

"The more we contemplate the vision of the new Jordan Marsh store, with the ultimate in merchandising facilities and techniques -- with its architecture that captures New England's past and its wealth of worldly ware which embodies America's present and the the world's present and future -- the more something that is not physical impresses itself upon our mind.

"It is the courage, the confidence, the serene and unshaken belief this old Boston institution has in Boston. It is the spirit of New England enterprise, a spirit undimmed as decade follows decade.

"The new Jordan Marsh will not spring into being quickly. Its scale will be the grander one. But stage by stage the old will disappear and the new will take its place and the area bounded by Washington, Summer and Avon Streets will become the site of America's fines, most modern and -- who knows -- largest store.

"This will be new. Yes, and it will be very old indeed. It is in that spirit that Jordan Marsh has served and prospered for nearly a century. Yesterday will join hands with tomorrow in this great enterprise and Boston will remain the commercial heart of New England and one of the great commercial centers of the world."

I recently moved to a very very small town in Texas I was browsing in a mini mall (booth setup) and came across a Jordan Marsh mink caplet in excellent condition. Embroidered on the caplet lining was Ingrid Anderson Kline. I came across this site when trying to identify the manuf. bphslp
Jordan Marsh announces new store

I still grieve over the loss of Jordan Marsh to a New York Junkshop which is all Macy's is. By the way, they didn't sell. It was a hostile takeover.
Login

On this day in 1947, Jordan, Marsh and Company announced that it was going to build "the greatest department store in the world" in downtown Boston. Almost a hundred years earlier, in 1851, Eben Jordan and Benjamin Marsh had gone into business together. They began by selling linen, silk, and other dry goods to wholesale customers. Ten years later, they expanded into retail sales. After the Civil War, Jordan Marsh introduced the concept of "department shopping." The store offered a wide range of goods, personal service, easy credit, art exhibitions, and musical performances. It soon became a treasured part of middle-class life in the Boston area. Many people mourned when the company was sold, and the Macy's name went up on Jordan Marsh stores.

It introduced the customer-is-always right policy, and offered money-back guarantees when most other retailers predicted the practice would lead to bankruptcy. 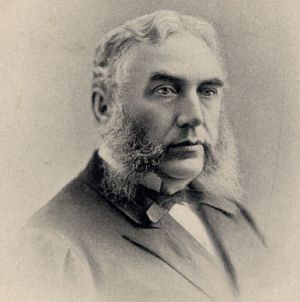 In 1841 an enterprising young man from Maine left his job as an errand boy in a Boston dry goods store and went into business for himself. Eben Jordan's first customer purchased one yard of cherry colored ribbon, and a Boston tradition was born. Ten years later, Jordan formed a partnership with Boston merchant Benjamin L. Marsh, laying the foundation for the nation's first "departmentalized" store.

The partners began as wholesalers. Eben Jordan traveled to Europe in search of fine linens, silks, and woolens to sell in Boston. As the business grew, it moved from one location to another. In 1861 Jordan and Marsh decided to begin selling directly to the public. They acquired a brownstone building in a central location, 450 Washington Square, at the heart of what is still Boston's downtown shopping district.

The two men were skillful entrepreneurs, and they were soon expanding into nearby buildings and offering an increasing quantity and variety of goods. During the second half of the nineteenth century, Eben Jordan, Jr. and a new partner named Edward Mitton introduced Bostonians to a whole new way of shopping.

Jordan, Marsh and Company combined an elegant atmosphere with excellent personal service and a wide range of merchandise. With many different departments displaying wares from around the world, the store drew shoppers from the city as well from the growing "streetcar suburbs." Once at the store, consumers could do more than just shop. Jordan Marsh offered fashion shows, a bakery famous for its blueberry muffins, art exhibitions, even afternoon concerts. (Jordan Hall is named for its greatest benefactor, Eben Jordan Jr., who was a lover of classical music; he also built the Boston Opera House.)

Jordan Marsh also pioneered new services for shoppers not available in more traditional specialty shops. Most important, it offered credit, usually in the form of charge accounts. It introduced the customer-is-always right policy, and offered money-back guarantees when most other retailers predicted the practice would lead to bankruptcy.

Jordan Marsh was also quick to implement new technology. The store was one of the first to be electrically lighted; other innovations included glass showcases, telephones, elevators, and pneumatic tubes that delivered cash and credit information to individual departments. As it grew and continued to upgrade its amenities, Jordan Marsh became an exciting destination for shoppers.

Growing numbers of these shoppers were upper middle-class women with time and money to spend on furnishing households to a standard that would demonstrate their family's affluence. As women gained power as consumers, Jordan Marsh and other department stores increasingly catered to their female clientèle. Managers arranged displays to make the shopping experience pleasing, comfortable, and, as one trade journal in the 1890s suggested, a relief from the monotony of home life.

Hailed as "the largest, most progressive and most liberal department store in New England," Jordan Marsh featured many amenities, including cozy waiting rooms where ladies could use store stationery to send notes to friends. Managers stocked shelves with items as common as sewing thread and as fine as silk ribbon imported from France. Jordan's devoted an entire department to "Sporting Outfits for Polo, Lawn Tennis, Yachting, Base Ball, Lacrosse, and Rowing."

Hailed as "the largest, most progressive and most liberal department store in New England," Jordan Marsh featured many amenities . . .

In the 1890s the store had a mailing list of 100,000 names. It touted its "fully equipped mail-order department" and promised that errors would be "promptly remedied whenever they occur." At a time when mail order shopping was just beginning to take off, Jordan Marsh broadened its appeal by pointing out that customers could save money by using the catalogue, "as traveling costs more than a letter."

Early on Jordan Marsh gained the reputation of being a good corporate citizen. Soon after the start of the Civil War, the store held a special flag raising ceremony on the roof of its building. Thousands gathered in the street below to cheer. Then Jordan's opened the city's first recruitment center in the main lobby of the store. Eben Jordan also promised to any employee who would enlist a free uniform, his full salary while serving, and a guarantee of his job on return. At the end of the war, Jordan Marsh presented a National Peace Jubilee — one of the grandest spectacles the city had ever seen.

Jordan Marsh was an active supporter of the war effort again in WWII. The store's War Bond Drives brought in over 18 million dollars. Jordan's was also one of the first stores in the nation to ask customers to turn in their furs to be converted into vest linings for seamen, and it collected over 35,000 silk and nylon stockings to make into powder bags for the Army and Navy. When morale began to sink in the darkest days of the war, Jordan's hosted a huge "Tribute to the Unconquerables" parade.

When morale began to sink in the darkest days of the war, Jordan's hosted a huge "Tribute to the Unconquerables" parade.

After World War II, as the nation rebounded with new hope and economic vigor, the management of Jordan Marsh announced that it would build a new store in downtown Boston.

Jordan's five older buildings would give way to a new building that would take up a full city block. Covering an area larger than Harvard Stadium, it would have two stories under ground; another 14 would rise into the air. It would have all the latest technology, including air conditioning, automatic doorways, block-long show windows, and radiant-heated sidewalks.

While the company was investing in its downtown store, it also began moving, along with its customers, into the suburbs. Jordan's constructed its first branch stores in older suburban communities in the 1940s, but the process of shifting retailing away from downtowns accelerated in the late 1950s. By 1957 the country had 940 shopping centers, most with at least one department store "anchor." Three years later, the number had doubled, and it doubled again in the next three years. By 1966 branch stores accounted for over half of all department store sales. Ten years later, more than three-quarters of total department store business nationwide came from branch sales.

The Jordan Marsh store on Washington Street remained the company's flagship. When the main building was torn down and replaced in 1976, some outraged customers cut up their credit cards in protest. More dramatic changes were to come. After a 60-year series of mergers and acquisitions, in 1995 all Jordan Marsh stores became Macy's. Macy's had its own Massachusetts connections. Its founder, R.H. Macy, was a Nantucket whaler who married the sister of a Boston retailer and, in 1846, opened a dry goods store in downtown Boston.

Macy's presence in nineteenth-century Boston was shortlived, but in 2006 Macy's parent company bought Filene's and took over both of Boston's traditional department stores. The Filene's building was sold. As a separately owned company, Filene's Basement, one of the city's major tourist attractions, was closed in 2007. In November 2011, Filene's Basement filed for bankruptcy and announced all stores would close by January 2012.

The Downtown Crossing Macy's store is located in the remaining portion of the old Jordan Marsh building.

Consumers' Republic: The Politics of Mass Consumption in Postwar America, by Lizabeth Cohen (Alfred A. Knopf, 2003).

On this day in 1951, Shoppers' World in Framingham opened for business. The first suburban shopping mall in the Northeast, and only the second in the country, the complex was a revolutionary design. Anchored by...