From "Sinners in the Hands of an Angry God"

… There is no want of power in God to cast wicked men into hell at any moment. Men's hands cannot be strong when God rises up. The strongest have no power to resist him, nor can any deliver out of his hands. He is not only able to cast wicked men into hell, but he can most easily do it… What are we, that we should think to stand before him, at whose rebuke the earth trembles, and before whom the rocks are thrown down?

… They deserve to be cast into hell; so that divine justice never stands in the way, it makes no objection against God's using his power at any moment to destroy them. Yea, on the contrary, justice calls aloud for an infinite punishment of their sins….

… They are now the objects of that very same anger and wrath of God, that is expressed in the torments of hell. And the reason why they do not go down to hell at each moment, is not because God, in whose power they are, is not then very angry with them; as he is with many miserable creatures now tormented in hell, who there feel and bear the fierceness of his wrath. Yea, God is a great deal more angry with great numbers that are now on earth: yea, doubtless, with many that are now in this congregation, who it may be are at ease, than he is with many of those who are now in the flames of hell.

So that it is not because God is unmindful of their wickedness, and does not resent it, that he does not let loose his hand and cut them off. God is not altogether such a one as themselves, though they may imagine him to be so. The wrath of God burns against them, their damnation does not slumber; the pit is prepared, the fire is made ready, the furnace is now hot, ready to receive them; the flames do now rage and glow. The glittering sword is whet, and held over them, and the pit hath opened its mouth under them.

…The devil stands ready to fall upon them, and seize them as his own, at what moment God shall permit him. They belong to him; he has their souls in his possession, and under his dominion…. The old serpent is gaping for them; hell opens its mouth wide to receive them; and if God should permit it, they would be hastily swallowed up and lost.

... Sin is the ruin and misery of the soul; it is destructive in its nature; and if God should leave it without restraint, there would need nothing else to make the soul perfectly miserable. The corruption of the heart of man is immoderate and boundless in its fury; and while wicked men live here, it is like fire pent up by God's restraints, whereas if it were let loose, it would set on fire the course of nature; and as the heart is now a sink of sin, so if sin was not restrained, it would immediately turn the soul into a fiery oven, or a furnace of fire and brimstone….

Full text of the sermon may be accessed at: http://digitalcommons.unl.edu/cgi/viewcontent.cgi?article=1053&context=etas.

On this day in 1727, Jonathan Edwards was ordained in Northampton. Two years later, he succeeded his grandfather as minister of what was then the largest and most influential church outside of Boston. He was young — only 23 — but he was already a brilliant thinker and charismatic preacher. Alarmed by the lax religious practices and spiritual complacency of his parishioners, he began preaching on the terrifying consequences of sin. His fire and brimstone sermons created a state of religious panic and produced conversions by the hundreds. The revival he inspired spread from Northampton to every corner of the colonies. During the height of the Great Awakening, as the movement was called, Jonathan Edwards was the most powerful man in British North America.

Edwards published several scientific treatises in addition to his many theological works and sermons. 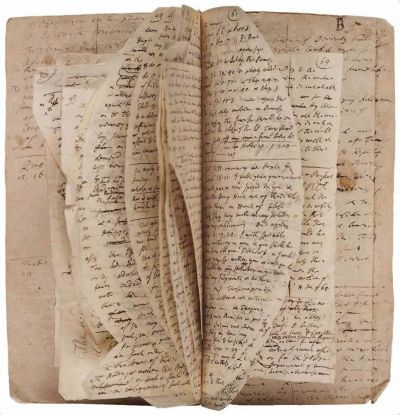 A fiery and inspirational preacher, Jonathan Edwards was also among the greatest of American philosophers and thinkers. He unleashed a religious revival in Massachusetts that paved the way for the Great Awakening, the evangelical movement that swept through all of British North America in the 1740s.

The son and grandson of ministers, he was born in East Windsor, Connecticut, the only son in a family with 10 daughters. He entered Yale at the age of 13, clearly predestined for the pulpit. After studying and teaching at Yale, he moved to Northampton in 1726 to assist his grandfather, Solomon Stoddard, who had served as the town's minister for nearly 60 years. Edwards was ordained the following year; when Stoddard died in 1729, the young minister took his place.

As ideas came to him, he would write them down on scraps of paper and pin them to his cloak. 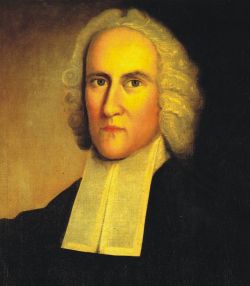 Edwards would often take long contemplative rides through the countryside. As ideas came to him, he would write them down on scraps of paper and pin them to his cloak. When he returned home, literally covered with thoughts, his wife, Sarah Pierrepont Edwards, would arrange the notes for his future use.

These rides offered both spiritual and physical exercise. Edwards was influenced by the English thinker John Locke, who believed that all knowledge comes through the senses. Jonathan Edwards experienced God's grace through nature. "I felt God, so to speak, at the first appearance of a thunderstorm," he wrote. A keen observer of nature, Edwards published several scientific treatises in addition to his many theological works and sermons.

While Jonathan Edwards appreciated nature, music, and art, he is remembered for the vivid descriptions of eternal damnation that filled his sermons. From his pulpit, he looked out on a spiritually complacent congregation. There was little fervor in worship, and almost anyone — converted or not — could participate in church services. Outward decency was considered sufficient evidence of inward sanctity. Above all, there was a growing preoccupation with acquiring material comforts.

"I felt God, so to speak, at the first appearance of a thunderstorm,"

To awaken his flock to the spiritual dangers they faced, Edwards preached about the loathsome reality of sin and its consequences. As he put it in his most famous sermon, Sinners in the Hands of an Angry God, "The God that holds you over the pit of hell, much as one holds a spider, or some loathsome insect, over the fire, abhors you, and is dreadfully provoked; his wrath towards you burns like fire; he looks upon you as worthy of nothing else, but to be cast into the fire; . . . Oh sinner! Consider the fearful danger you are in."

Although he delivered his sermons in a plain style and controlled monotone, the images that he created in the minds of his parishioners aroused fear and consternation and led many in the congregation to experience conversion. One witness recorded, "Before the sermon was done, there was a great moaning and crying out throughout the whole [church]. What shall I do to be saved. Oh am I going to Hell. O what shall I do for Christ."

"Oh sinner! Consider the fearful danger you are in."

By the time the revival subsided, Edwards had made numerous converts but also powerful enemies in the community. There were those who resented him for setting aside the more liberal doctrines of his grandfather, Solomon Stoddard. Others feared that the emotions released by revivals were dangerous and might spiral out of control. Still others chaffed under his strict morality. Influential Northampton families had been humiliated when Edwards publicly rebuked their adolescent children from the pulpit. These controversies finally led to his dismissal in 1750, a bitter blow to Edwards. Devastated, he moved to the frontier town of Stockbridge and spent the next six years as a missionary to the Indians. In 1757, he accepted a position as president of the College of New Jersey (now Princeton University). He was there for only a few months before he died from complications following a smallpox inoculation.

Jonathan Edwards's legacy has been constructed and reconstructed many times. An accurate assessment of his thought and work, recent scholars contend, must include not only his terrifyingly vivid sermons but also his neglected writings that give the love of beauty, harmony, and humanity a place in the firmament.

"Jonathan Edwards and the Gospel of Love," by Ronald Story in A Place Called Paradise: Culture and Community in Northampton, Massachusetts, 1654-2004 ed. by Kerry W. Buckley (Historic Northampton and the University of Massachusetts Press, 2004).

The Other Jonathan Edwards: Selected Writings on Society, Love, and Justice, by Gerald McDermott and Ronald Story. Amherst: University of Massachusetts Press, 2015.