…Among the heroes of endurance … there was one man whose name, seldom mentioned now save by some of the few surviving pioneers, deserves to be perpetuated.

The first reliable trace of our modest hero finds him in the Territory of Ohio in 1801, with a horse-load of apple seeds, which he planted in various places on and about the borders of Licking County, the first orchard thus originated by him being on the farm of Isaac Stadden, in what is now known as Licking County, in the state of Ohio…These are the first well-authenticated facts in the history of Jonathan Chapman, …

It was his custom, when he had been welcomed to some hospitable log-house after a weary day of journeying, to lie down on the puncheon floor, and after inquiring if his auditors would hear, "some news right fresh from heaven," produce his few tattered books, among which would be a New Testament, and read and expound until his uncultivated hearers would catch the spirit and glow of his enthusiasm, as they scarcely comprehended his language. A lady who knew him in his later years writes in the following terms of one of these domiciliary of poor, self-sacrificing Johnny Appleseed: "We can hear him read now, just as he did that summer day, when we were busy quilting up stairs and he lay near the door, his voice rising denunciatory and thrilling – strong and loud as the roar of wind and waves, then soft and soothing as the balmy airs that quivered the morning-glory leaves about his gray beard. His was a strange eloquence at times and he was undoubtedly a man of genius!"

...in the trunk of (a) hollowed out tree. Also, Leominster is a city not a town.
Login

On this day in 1845, John Chapman died having made a fortune planting apple saplings on the American frontier. Born and raised in Leominster, the man remembered as "Johnny Appleseed" left Massachusetts in the 1790s just as farmers were moving into the Midwest. Often the only alcoholic beverage available in frontier settlements was cider. To Chapman, this represented a business opportunity. An odd man who considered it cruel to ride a horse or chop down a tree, he planted orchards to quench the farmer's thirst, not to keep him healthy. Only later, when the apple industry wanted to distance itself from the stigma of hard cider, did the eccentric, entrepreneurial John Chapman become the beloved folk hero known as "Johnny Appleseed."

At a time when cider, and the apples pressed to make it, were associated with the social ills of drinking, apple growers needed a way to give the fruit a healthy, wholesome image. 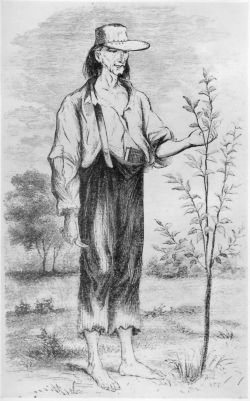 It would be difficult for a visitor to the Worcester County town of Leominster to miss the fact that John Chapman, the man most people know as "Johnny Appleseed," was born there. Streets and schools bear his name, granite markers and billboards mark his birthplace, an annual Johnny Appleseed Festival draws an average of 10,000 people, and a nine-foot-tall bronze statue of Chapman stands a mile from the house where he was born.

Yet most of John Chapman's fame rests not on documented facts but on myth and oral tradition. In stories passed down over the years since his death in 1845, "Johnny Appleseed" has evolved into a sort of St. Francis of the American frontier, a humble man who wandered the West caring for wild creatures and distributing free apple seeds to settlers. He is usually pictured shoeless, clad in rags, with a tin pot for a hat, striding happily through the forest with a bag of apple seeds over his shoulder and an assortment of woodland animals as his companions. He is portrayed as a gentle and godly man, who brought the wholesome apple to men and women living on the edge of civilization.

While there is some truth to this image, the real John Chapman was a far more complicated fellow. An astute businessman, he planted orchards on the Ohio and Indiana frontier and then sold seeds and saplings to settlers. He traveled from orchard to orchard, tending his trees and — quite literally — growing his business.

"Johnny Appleseed" has evolved into a sort of St. Francis of the American frontier, a humble man who wandered the West caring for wild creatures and distributing free apple seeds to settlers.

At a time when imported sugar was expensive and uncommon, his apples filled a need for sweetener; more importantly, their fermented juice was a major source of alcohol on the frontier. He continually planted new orchards to keep up with the demand. He died the owner of over 1,200 acres of prime real estate and a very wealthy man.

John Chapman was born on the eve of the Revolution. His mother died while John was young and his father was serving in the Continental Army, so he spent his early years in the care of his grandparents. After the war, John's father remarried, and he and his new wife had ten more children. Young Chapman remained in Massachusetts until 1797 when, at the age of 27, he set out for the Ohio frontier. He never again lived in a settled place.

His itinerant habits derived in part from his brilliant business plan. He needed to be constantly on the move, buying inexpensive wilderness land along riverbanks and planting apple saplings just before a wave of new settlers, and new customers, moved into the area.

. . . the apples that grew on Chapman's trees were, as one writer explains, "for little but hard cider . . . apples were something people drank."

Once his orchards were established, he would hire a local boy to look after the saplings; he would move on, returning to tend his trees and sell saplings to the newcomers. In time, he covered thousands of miles, stretching from western Pennsylvania, through central Ohio, into Indiana.

The people who bought Chapman's saplings were not looking to harvest apples to make pies or sauces. Indeed the apples that grew on Chapman's trees were, as one writer explains, "for little but hard cider . . . apples were something people drank." To get an edible apple requires grafting of trees; the fruit of seedling apples is almost always inedible — "sour enough," Henry David Thoreau wrote, "to set a squirrel's teeth on edge and make a jay scream."

As John Chapman brought wildling apples to thirsty farmers, he also brought an unusual religious message. He was a self-appointed apostle of the Swedenborgian Church; as he traveled, he frequently stopped in frontier cabins to ask if his hosts would hear "some news fresh from Heaven."

Chapman's biographer suggests that his faith may explain "the strange and wonderful ways Chapman conducted himself in nature. . . . In his eye even the lowliest worm glowed with divine purpose."

"In his eye even the lowliest worm glowed with divine purpose."

Although John Chapman was a successful businessman, he rarely spent money on himself. He was said to use a coffee sack for clothing; one winter he made his home in the trunk of hollowed out tree. But when he encountered someone in need, he was a generous benefactor. He was also reputed to be a peacemaker between Native Americans, who appreciated his rapport with the natural world, and white settlers. He shared his saplings with Indians; in turn they taught him the healing power of herbs and other plants. As he traveled, his reputation as a healer, and a sort of folk saint, grew.

The "Johnny Appleseed" of lore — the happy-go-lucky wanderer who brought tasty apples to hungry settlers — was largely a creation of the apple industry in the early 1900s. At a time when cider, and the apples pressed to make it, were associated with the social ills of drinking, apple growers needed a way to give the fruit a healthy, wholesome image. A half-century after John Chapman's death, "Johnny Appleseed" was their man.

The Botany of Desire: A Plant's-Eye View of the World, by Michael Pollan (Random House, 2002).