A golden rooster turned high above [the town of] Tarbox. The Congregational Church, a Greek temple with a cupola and spire, shared a ledgy rise, once common pasturage, with a baseball backstop and a cast-iron band pavilion used only on Memorial Day, when it sheltered shouted prayers, and in the Christmas season, when it became a creche.

Three edifices had succeeded the first meetinghouse, a thatched fort, and the last, renovated in 1896 and 1939, lifted well over one hundred feet into the air a gilded weather cock that had been salvaged from the previous church and thus dated from colonial times. Its eye was a copper English penny. Deposed once each generation by hurricanes, lightening, or repairs, it was always, much bent and welded, restored. It turned in the wind and flashed in the sun and served as a landmark to fishermen in Massachusetts Bay. Children in the town grew up with the sense that the bird was God. That is, if God were physically present in Tarbox, it was in the form of this unreachable weathercock visible from everywhere.

And if its penny could see, it saw everything, spread below it like a living map. The central square mile of Tarbox contained a hosiery mill converted to the manufacture of plastic toys, three dozen stores, several acres of parking lot, and hundreds of small-yarded homes. The homes were mixed: the surviving seventeenth century saltboxes the orginal Kimballs and Sewells and Tarboxes and Cogswells had set along the wobbly pasture lanes, quaintly named for the virtues, that radiated from the green; the peeling Federalist cubes with widows'-walks; the gingerbread mansions attesting to the decades of textile prosperity; the tight brick alleys plotted to house the millworkers imported from Poland; the pre-Depression domiciles with stubby porches and narrow chimneys and composition sidings the colors of mustard and parsley and graphite and wine; the new developments like even pastel teeth eating the woods of faraway Indian Hill....

On this day in 1964, John Updike was at 32 the youngest person elected to the National Institute of Arts and Letters. Updike wrote more than 60 books — novels, poetry, drama, essays, memoirs, and art and literary criticism — and published widely until his death on January 27, 2009. He was one of only three individuals to win the Pulitzer Prize for fiction twice, and also one of very few Americans to receive both the National Medal of Art and the National Medal for the Humanities. Born in Pennsylvania, Updike spent most of his adult life on the North Shore of Massachusetts. He lived for 17 years in Ipswich and used the town as the setting for his bestselling novel, Couples. 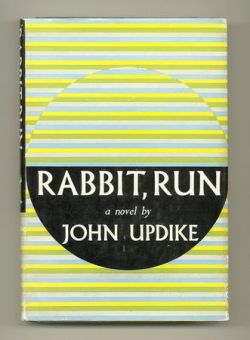 The number of awards, prizes, and honors John Hayer Updike won may only be exceeded by the number of books he wrote. A prolific and versatile writer, he authored more than 60 books and produced dozens of magazine pieces. Updike lived in Massachusetts while attending Harvard; after graduation he made just three short forays outside the state.

Updike is perhaps best known for his "Rabbit" novels, which chronicle the life of Harry "Rabbit" Angstrom. The first, Rabbit Run, was published in 1960, when Updike was just 28 years old. Two of the sequels, Rabbit Is Rich (1982) and Rabbit at Rest (1991), won the Pulitzer Prize.

Born in 1932, he was an only child. Since the family lived with his maternal grandparents for most of his childhood, he grew up surrounded by adults. His father was a math teacher; his mother, who held a master's degree from Cornell University, was herself an aspiring writer. Her son was an excellent student and a voracious reader, and she encouraged his love for art and his interest in writing.

When he left his small Pennsylvania town for Harvard College in 1950, he thought of himself, he recalled, "as some kind of potential cartoonist." While he joined the Harvard Lampoon as a cartoonist, writing turned out to "more [his] cup of tea." He graduated from Harvard "pretty resolved to become a writer if [he] could."

He graduated from Harvard "pretty resolved to become a writer if [he] could."

Updike sold a poem and his first short story to The New Yorker magazine soon after he graduated, but he was not quite ready to embark on a writing career. The visual arts still beckoned, and together with his wife, Mary, he spent a year at the Ruskin School of Drawing and Fine Art in Oxford, England.

In 1955 the Updikes and their young daughter returned to the U.S., where he joined the staff of The New Yorker. After two years, the family, which now included two children, left Manhattan and moved to Ipswich, Massachusetts, the picturesque North Shore town where he and Mary had spent their honeymoon.

In 1968 he published Couples, a novel about the shifting relationships among young suburban couples. Set in the fictional town of Tarbox, modeled on Ipswich, the book remained on the bestseller list for a year and was later made into a film. In 1973, Mary and John Updike filed for divorce. John Updike moved to Beacon Hill, but returned to the North Shore with his second wife, Martha; they settled in Beverly Farms in 1982.

"As it turned out," he said, "I got into print pretty readily."

Updike soon left the New Yorker staff, but his relationship with the magazine was far from over. He published many of his poems, essays, reviews, and short stories there in the past 50 years.

Despite his early good fortune, John Updike did not expect instant success. He had grown up witnessing his mother receive many rejection letters from publishers and gave himself five years to try the life of a freelance writer. "As it turned out," he said, "I got into print pretty readily." Updike's first book of poetry was published in 1958; his first novel came out the following year.

Two years later, John Updike received the first of what would be many awards: the Rosenthal Award of the National Institute of Arts and Letters. In 1964 he became one of the Institute's 250 members. At 32, Updike was the youngest individual ever elected to this prestigious organization.

"I still love books coming out. I love the smell of glue and the shiny look of the jacket and the type, to see your own scribbles turned into more or less impeccable type."

Neither his writing nor the recognition it brought him ever abated. In a 2004 interview, he explained that he wrote for three or four hours every morning. "I've been maintaining this schedule off and on — well, really since I moved to Ipswich in '57. It's a long time to be doing one thing. I don't know how to retire. . . I still like to do it. I still love books coming out. I love the smell of glue and the shiny look of the jacket and the type, to see your own scribbles turned into more or less impeccable type. It's still a great thrill to me, so I will probably persevere a little longer." Indeed, his 21st novel, Villages, was published in 2004 and a book of art criticism, Still Looking, in 2005. What turned out to be his final novel, The Widows of Eastwick, was published in October, 2008 (Knopf).

On this day in 1963, Robert Frost died, the most popular and renowned American poet of the twentieth century. But his success was a long time in coming. It was as a student at Lawrence...