From John Brown's speech, "Idea of Things in Kansas"

I propose in order to make this meeting as useful & interesting as I can …to try & give a correct idea of the condition of things in Kansas, as they were while I was there & as I suppose they still are, as far as the great question at issue is concerned….

I together with Four of my Sons were called out to help defend Lawrence [Kansas] in the Fall of 1855 & traveled most of the way on foot; & during a dark Night, a distance of 35 Miles: where we were detained with some 500 others or thereabouts from 5 to 15 days: say an average of 10 days at a cost to each pr day of $1.50 as wages to say nothing of the actual loss & suffering it occasioned. Many of them leaving their families at home sick, their crops not secured, their houses unprepared for Winter, & many of them without houses at all. This was the case with myself, & all my sons: who were unable to get any house built after our return…

… I saw the ruins of many Free State mens houses, at different places in the Territory; together with Stacks of grain wasted, & burning to the amount of say $50,000 Dollars. Making in lost time & destruction of property more than $150,000 Dollars.

… In Sept last I visited a beautiful little Free State Town called Stanton on the North side of the Osage or Meridezene [Marais des Cygnes] river as it is called: from which every inhabitant had fled (being in fear of their lives) after having built them at a heavy expense a strong Block House or wooden fort for their protection. Many of them had left their effects liable to be destroyed or carried off not being able to remove them.… During last Summer & Fall deserted Houses, & Cornfields were to be met with in almost every direction South of the Kansas river. I with Five sick and wounded sons, & Son-in-Law; were obliged for some time to lie on the ground without shelter, our Boots, & clothes worn out, destitute of money, & at times almost in a State of starvation…

…I am trying to raise from $20, to 25,000 Dollars in the Free States to enable me to continue my efforts in the cause of Freedom…. Will some Gentleman or lady take hold & try what can be done by small contributions from Counties Cities Towns, Societies or Churches? …. I was told that the Newspapers in a certain City were dressed in mourning on hearing that I was killed & scalped in Kansas; but I did not know of it until I reached the place. Much good it did me. In the same place I met a more cool reception than in any other place where I have stopped. If my friends will hold up my hands while I live: I will freely absolve them from any expence over me when I am dead. I do not ask for pay but shall be most grateful for all the assistance I can get.

Was this Higginson Emily Dickenson's "friend"? If so, is there any record of her knowing about his abolitionist activities?
Thomas Higginson

Indeed it is the same Higginson. Per Wikipedia at: http://en.wikipedia.org/wiki/Thomas_Wentworth_Higginson
Revolt, Not Revival

Brown wanted to incite a slave "insurrection," not "resurrection!"
Login

On this day in 1857, John Brown addressed a crowd in Concord Town Hall. He spoke about the situation in Kansas, where a bitter struggle was underway between pro- and anti-slavery settlers. In a matter-of-fact manner, he described in graphic detail the "terrible hardships, exposures, privations & cruelties" Free State families were suffering to keep slavery out of Kansas. A native New Englander, he hoped his speaking tour of the region would raise $25,000 to allow him to continue fighting "in the cause of Freedom." While John Brown had many admirers in Concord and elsewhere in New England, few of them shared his passionate commitment to a Holy War against slavery, and fewer still came to his aid.

After two and a half years, Brown left New England embittered by what he saw as the failure of the region's leadership to back his cause. 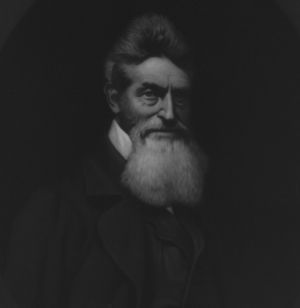 John Brown may well be the most controversial man in U.S. history. He has been called a saint, a fanatic, a martyr, and a cold-blooded murderer. Born in 1800 in Connecticut, he moved as a child with his family to Ohio. The Browns were fiercely opposed to slavery, deeply religious — and deeply in debt. John Brown followed in his father's footsteps. He married, had 20 children, and moved his large family from place to place in search of a living. He tried his hand as a farmer, tanner, land speculator, and wool merchant, never with much success.

Wherever he went, Brown dedicated himself totally to the cause of abolition. He participated in the Underground Railroad and worked to protect escaped slaves from slave catchers. When Brown met Frederick Douglass in 1847 in Springfield, Massachusetts, the country's leading black abolitionist reported that "though a white gentleman, [Brown] is in sympathy a black man, and as deeply interested in our cause, as though his own soul had been pierced with the iron of slavery." John Brown told Douglass that he planned to lead a war to free the slaves.

John Brown, his wife, and young children followed two of their adult sons to the Kansas Territory in 1855. A year earlier, Congress had declared that the people of Kansas and Nebraska would vote on whether the territories would be free or slave. Large numbers of pro- and anti-slavery settlers had rushed to the area hoping to sway the vote in their favor.

"Though a white gentleman, [Brown] is in sympathy a black man, and as deeply interested in our cause, as though his own soul had been pierced with the iron of slavery."

Pro-slavery forces terrorized the region in an effort to intimidate anti-slavery men and influence the elections. The homes of anti-slavery families were burned, their livestock slaughtered, crops destroyed; men were imprisoned, tortured, maimed, and murdered. One of John Brown's own sons was killed.

Brown was determined to fight back. He organized the defense of his free-soil town of Osawattomie, Kansas, then launched an offensive against the pro-slavery forces. In May of 1856 he led an attack on a pro-slavery settlement along Pottawatomie Creek in which five unarmed men were killed.

Brown's complicity in the Pottawatomie murders was not widely known. His reputation for militant resistance made him a national figure and a hero to abolitionists back east. They saw him as a man who was unafraid to take action — a refreshing change after two decades of a movement that relied on "moral suasion." John Brown was willing to risk everything, even his own and his children's lives, to rid the nation of slavery.

John Brown was willing to risk everything, even his own and his children's lives, to rid the nation of slavery.

But Brown needed money to support a de facto army to fight in Kansas, and money was one thing he lacked. He knew that New England abolitionists were unlikely to join him on the battlefield, but he hoped they would finance his campaign, and provide for his wife and small children. Brown came to New England in 1857 to rally abolitionists and raise money.

One of his first stops was Concord, Massachusetts. His host was Franklin Sanborn, the town's schoolteacher. On March 12th over 100 people, including Emerson and Thoreau, gathered in the Town Hall to hear him describe the atrocities in Kansas.

He laid out his case in simple, plain language. Some in the audience were surprised by his lack of polish and uninspired speaking style. Others were impressed with his directness and daring. Henry David Thoreau later wrote that Brown "did not go to Harvard. He was not fed on the pap that is there furnished. As he phrased it, 'I know no more grammar than one of your calves.' But he went to the University of the West, where he studied the science of Liberty. . . . "

At the end of the talk, Emerson donated $25, Thoreau "a trifle," and others according to their means, but the fundraising went poorly. New Englanders tended to be wary of what they considered Brown's fanatical commitment to bringing an end to slavery. After two and a half years, Brown left New England embittered by what he saw as the failure of the region's leadership to back his cause.

Brown did enjoy one notable success, however. Franklin Sanborn promised to get him the help he needed. Sanborn recruited five wealthy New England reformers who admired the charismatic John Brown as a courageous freedom fighter. The "Secret Six" met with Brown in Boston in May of 1858 and secretly agreed to fund his "Holy War."

The men raised money to support Brown's activities in Kansas; when he decided to invade Virginia and incite a slave resurrection, they began to have second thoughts. They doubted that the plan was workable, and they knew it could expose them to prosecution for treason. Nevertheless, they agreed to help Brown buy arms for the invasion force and the liberated slaves.

In October of 1859, Brown led 21 men in a raid on the federal arsenal at Harpers Ferry, Virginia. The raid failed. When Brown was arrested, the authorities found documents that revealed the identity and activities of the "Secret Six."

As Brown awaited his trial, the six men anxiously anticipated arrest. One suffered a nervous breakdown. Three others fled to Canada and did not return until after Brown's execution. The fifth was dying of tuberculosis in Rome. Only one — the Worcester minister Thomas Higginson — stood his ground. In the end, he was not prosecuted.

John Brown was hanged on December 2, 1859. Although many northerners had been shocked by Brown's militancy and his willingness to shed blood, they mourned the loss a man unafraid to die for the cause of abolition.

The Secret Six: The True Tale of the Men Who Conspired with John Brown, by Edward J. Benehan, Jr. (Crown Publishers, 1997).