I received your kind Letter, at New York, and it is not easy for you to imagine the Pleasure It has given me. I have not found a single Opportunity to write since I left Boston, excepting by the Post and I dont choose to write by that Conveyance, for fear of foul Play. But as We are now within forty two Miles of Philadelphia, I hope there to find some private Hand by which I can convey this….

Tomorrow We reach the Theatre of Action. God Almighty grant us Wisdom and Virtue sufficient for the high Trust that is developed upon Us. The Spirit of the People wherever we have been seems to be very favourable. They universally consider our Cause as their own, and express the firmest Resolution, to abide the Determination of the Congress.

… Remember my tender Love to my little Nabby [their daughter]. Tell her she must write me a Letter and inclose it in the next you send. I am charmed with your Amusement with our little Johnny [their eldest son]. Tell him I am glad to hear he is so good a Boy as to read to his Mamma, for her Entertainment, and to keep himself out of the Company of rude Children. Tell him I hope to hear a good Account of his Accidence and Nomenclature, when I return. Kiss my little Charley and Tommy [their younger sons] for me….

Your Account of the Rain refreshed me. I hope our Husbandry is prudently and industriously managed. Frugality must be our Support. Our Expences, in this Journey, will be very great – our only Reward will be the consolatory Reflection that We toil, spend our Time, and tempt Dangers for the public Good – happy indeed, if we do any good!

The Education of our Children is never out of my Mind. Train them to Virtue, habituate them to industry, activity, and Spirit. Make them consider every Vice, as shamefull and unmanly: fire them with Ambition to be usefull – make them disdain to be destitute of any usefull, or ornamental Knowledge or Accomplishment. Fix their Ambition upon great and solid Objects, and their Contempt upon little, frivolous, and useless ones. It is Time, my dear, for you to begin to teach them French. Every Decency, Grace, and Honesty should be inculcated upon them…

I am, with the tenderest Affection and Concern, your wandering

on John Adams, which they played again last night. It is available on DVD and back on On Demand right now. If that does not get you psyched about the Declaration, then nothing will. Yes, there can be nit-picking about how certain of the flags shown may be not the ones that would have been present in Boston in 1776, that the Ticonderoga cannon would not have been hauled by Knox and crew past the Adams Braintree farm, nor could John Adams have seen the casualties at Concord-Lexington, but overall, it is very well done, with Laura Linney as a great Abigail. Watching the first two installments would be a great way to celebrate the 4th. The second program is on the Declaration, but it is set up nicely by Episode I with Adams representing the accused Brit soldiers after the Boston Massacre.
Login

On this day in 1826, 50 years after the Declaration of Independence was adopted in Philadelphia, John Adams died at home in Braintree. One of the great men of the Revolutionary generation and the second president of the United States, Adams was 91 years old. Shortly before he breathed his last, John Adams whispered, "Thomas Jefferson survives." In fact, 560 miles away at Monticello, Thomas Jefferson had died only a few hours earlier. The fact that these two founding fathers died on the same day and that it was, of all days, the Fourth of July was not viewed as a coincidence. In his two-hour eulogy at Fanueil Hall, Daniel Webster cited it as "proof" of how much God cared for the country.

Although Adams called the vice presidency "the most insignificant office that ever the invention of man contrived," he held it for two terms. 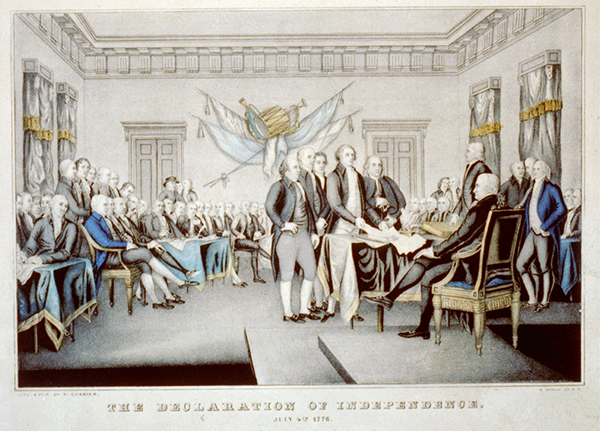 Born in a different time and place, John Adams might have lived a contented life as a country lawyer and farmer. Instead, he was catapulted to greatness as a revolutionary, diplomat, and nation builder. Learned, thoughtful, and deeply principled, he was by nature a philosopher, yet events forced him to play the role of a pragmatic politician.

Adams was born on a farm in Braintree, a quiet village just south of Boston. He always loved the farm and farming, but his intellectual gifts were unmistakable. His father decided that his son should be educated for the ministry. He attended the town schools, was tutored in Latin, and entered Harvard in 1751.

John Adams's four years at Harvard opened new worlds to him and awakened a passion for science, debate, and oration. He was soon more interested in a career as a physician, lawyer, or government official than a clergyman. After graduation, he served an apprenticeship with a Worcester lawyer, before being admitted to the bar.

In 1758, Adams returned home to Braintree and opened a law office. Like other country lawyers in colonial Massachusetts, he went to Boston often on legal business. He acquired a circle of friends — including his distant cousin Sam Adams — who were concerned with, and increasingly angered by, the way the British Parliament treated the colonies. Adams began to articulate his ideas on the nature of freedom and the universal rights of men. In a series of anonymous articles for the Boston Gazette, he set forth the philosophical, legal, and religious justifications for protesting the oppressive acts of Parliament. His carefully reasoned arguments helped lay the intellectual groundwork for colonial resistance.

"We have always understood it to be a grand and fundamental principle of the [English] constitution that no freeman should be subject to any tax to which he has not given his own consent." 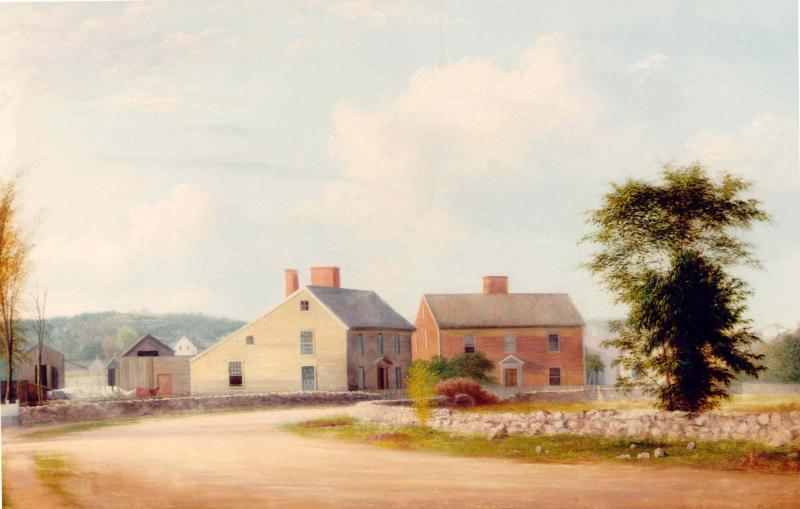 Adams's frequent trips to Boston took him past the Weymouth home of Rev. William Smith. In 1759, he first met the middle of Smith's three daughters, 15-year-old Abigail. They were married after a five-year courtship. While others might find John Adams blunt, irascible, and sometimes thin-skinned, Abigail Smith fell in love with his wit, integrity, and strength of character; in her eyes, he was nothing less than "a giant of great heart." He found her intelligent, good-natured, and steady. Both were strong-minded. As one biographer put it, John Adams's marriage "was the most important decision of [his] life." The devoted couple would support and nurture each other for the next 63 years — many of them spent apart.

In 1765, news reached America that Parliament had passed the Stamp Act, a measure Adams referred to as "the enormous engine fabricated by the British Parliament for battering down all the rights and liberties of America." An outraged Adams wrote the official protest for Braintree. "We have always understood it to be a grand and fundamental principle of the [English] constitution that no freeman should be subject to any tax to which he has not given his own consent." In a matter of weeks, more than 40 towns had adopted the "Braintree Instructions."

As respect for his legal and political skills grew, Adams relocated his household and law practice to Boston, where he became the city's busiest attorney. (The family would move back to the relative safety of Braintree in 1774.)

"It ought to be solemnized with pomp and parade, with shows, games, sports, guns, bells, bonfires, and illuminations from one end of this continent to the other from this time forward and forever more."

John Adams's distaste for royal authority was well known, but he was an independent thinker with a deep fear of "mob rule." When British soldiers were charged with murder in the Boston Massacre, he viewed the incident as the result of unlawful behavior by an unruly crowd and volunteered to represent the hated "Lobsterbacks." Pro-independence newspapers were quick to attack his position, but he won acquittals for the soldiers and established himself as a man of principle who would not be swayed by public opinion.

During the years leading up to the Revolution, Adams became committed to the cause of independence. As one of five Massachusetts delegates to the First Continental Congress in Philadelphia, he insisted that the colonies needed to take decisive action to sever ties with Britain. While other delegates hesitated, he led the movement to declare independence.

When the declaration finally came, he wrote prophetically to his beloved Abigail, "The day will be celebrated by succeeding generations as the great anniversary festival. It ought to be commemorated as the Day of Deliverance by solemn acts of devotion to God Almighty. It ought to be solemnized with pomp and parade, with shows, games, sports, guns, bells, bonfires, and illuminations from one end of this continent to the other from this time forward and forever more."

As George Washington assumed command of the Continental Army, Adams was appointed to the Board of War and given the difficult task of equipping the troops. In 1777, Congress decided he was needed in Europe; he sailed for France hoping to gain diplomatic and material support for the new nation.

In the strife-filled years of early nation-building, he was fiercely independent; he decried and steered clear of the growing partisanship that he feared would destroy the fragile new republic.

He had only been home a few months when Congress sent him back to Europe to negotiate a peace treaty with Great Britain. At the end of war, he was named the first ambassador to England. Back at home, Shays' Rebellion had bolstered support in the Constitutional Convention for the strong central government Adams favored.He returned to the United States in 1788, just in time to see the new constitution ratified. Within a year, he was elected the nation's first vice president, and on April 13, 1789, he departed for the capital, then in New York.

Although Adams called the vice presidency "the most insignificant office that ever the invention of man contrived," he held it for two terms. In the strife-filled years of early nation-building, he was fiercely independent; he decried and steered clear of the growing partisanship that he feared would destroy the fragile new republic.

Adams was elected the second president of the United States and served from 1797 to 1801. While he succeeded in keeping the country out of a looming war with France, his popularity and reputation suffered from his support for the harsh Alien and Sedition Acts. Ultimately, he lost his bid for reelection because he refused, on principle, to embrace partisan politics.

The world watched in awe as Adams transferred power to Thomas Jefferson, once his ally and friend, now his opponent — a powerful demonstration of the democratic system both men had helped to create. John Adams returned to Massachusetts, where he lived for another 25 years.

Adams National Historical Park in Quincy includes the John Adams and John Quincy Adams birthplaces and the family's residence from 1788 to 1927.

On this day in 1775, Abigail Adams wrote sadly "the Die is Cast . . . The Sword is now our only yet dreadful alternative." The day before, news had come from England. King George...