From Martin Luther King, Jr.'s eulogy for James Reeb, March 15, 1965.
What killed James Reeb? When we move from the who to the what, the blame is wide and responsibility grows.

So in his death, James Reeb says something to each of us, black and white alike, that we must substitute courage for caution, says to us that we must be concerned not merely about who murdered him, but about the system, the way of life, the philosophy which produced the murder. His death says to us that we must work passionately, unrelentingly, to make the American dream a reality, so he did not die in vain.

Found this great background video about the march in Selma and the death of James Reeb. Shows a nice picture of him and a speech from Lyndon Johnson. http://www.hulu.com/watch/53345/the-legacy-of-mlk-civil-rights-march-in-selma
Login

On this day in 1965, a white minister from Boston lay near death in an Alabama hospital. As James Reeb's life slipped away, his story was in every morning paper and on every evening news program. Deeply committed to the non-violent struggle for civil rights, he had gone to Selma, Alabama, in response to an appeal from Martin Luther King, Jr. On March 9th, he was viciously attacked by men opposed to civil rights. When Reeb died two days later at the age of 38, President Lyndon Johnson called it "an American tragedy." His death helped turn the tide of public opinion in favor of federal legislation to guarantee voting rights for the country's black citizens.

In Boston, on the Saturday after his death, close to 30,000 people attended a memorial gathering. 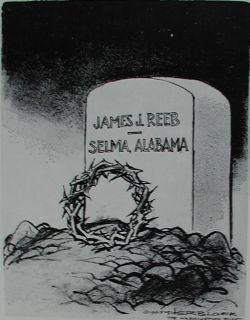 Before March 10, 1965, the name James Reeb would have been familiar only to his family, friends, and co-workers. He had spent his adult life working in urban neighborhoods and was not the sort of person who sought publicity. A well-educated white man, he lived with his family in one of Boston's most impoverished black neighborhoods so he would be near his job at a Roxbury community center. But in early March 1965, Jim Reeb became part of history.

Along with clergymen from around the nation, he flew to Selma, Alabama, to join a peaceful march to demand voting rights for the city's African Americans. There, on March 9th he was the victim of an unprovoked and vicious attack. As he lay near death, the whole nation learned the story of Jim Reeb's life. When he died on March 11th, people around the nation mourned James Reeb as a martyr for the cause of civil rights.

He was born on New Year's Day in 1927 in a small Pennsylvania town. During his early childhood, the family struggled with illness and poverty; they moved repeatedly as Reeb's father searched for work. Finally, when Jim was in his early teens, they settled in Colorado.

Jim was an excellent student and a skilled debater; his classmates and teachers later remembered his intensity, moral certainty, and insistence on reasoning from principles. But Jim Reeb had another distinguishing characteristic: until he had corrective surgery in his teens, he was cross-eyed. He knew how it felt to be stigmatized and excluded because of the way one looked. He understood firsthand the anger, bitterness, and suffering caused by prejudice.

"we are going to have to really take upon ourselves a continuing and disciplined effort with no real hope that in our lifetime we are going to be able to take a vacation from the struggle for justice." 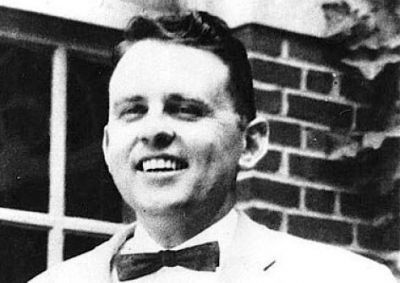 Jim Reeb was a deeply committed Christian, and everyone expected that the friendly but serious young man would become a minister. After serving in World War II, he went to St. Olaf College, a Lutheran school, and then to Princeton Theological Seminary.

While Reeb was preparing for ordination as a minister, he served as a chaplain at a Philadelphia hospital. He found the work deeply satisfying and stayed on at the hospital after graduation from seminary. His next job was working with inner-city youth at the YMCA. His first pulpit was at a Unitarian church that served a poor black neighborhood in Washington, DC.

After five years there, Reeb decided that the administrative demands of the job took too much time away from his true calling—ministering to people in need. In 1964, he resigned his pulpit.

In his final sermon, he urged his parishioners to dedicate themselves to helping their black neighbors. He told the congregation that "we are going to have to really take upon ourselves a continuing and disciplined effort with no real hope that in our lifetime we are going to be able to take a vacation from the struggle for justice."

Reeb and his family relocated to Boston where he went to work for the Quaker-run American Friends Service Committee. He would be based in Roxbury and working on a new project to improve housing for the urban poor. He and his wife believed they should live in the community they were serving, so they moved to Dorchester. They sent their children to the neighborhood schools.

He was returning from dinner with two other white ministers when they were suddenly assaulted by three white men shouting racial epithets.

Most of his colleagues, including black social workers and educators, thought he was foolish to settle his family in the midst of a black ghetto, but Reeb insisted that it was essential to gaining a real understanding of what inner-city blacks faced every day and to earning their trust.

Although he was not working as a clergyman, Jim Reeb treated his job as if it were a ministry. He was committed to restoring human dignity to the urban poor. His goal was to increase the number and quality of housing units available to Boston's poor black residents. In January and February of 1965, he was pursuing a campaign to get the city to strengthen its building and safety codes.

Then on March 7, 1965—a date known ever since as "Bloody Sunday"—state troopers used billy clubs, bull whips, and tear gas to break up a peaceful protest march from Selma to the capital in Birmingham. When the brutal scene was broadcast on national television, people all over the country were horrified by what they saw.

The next day the Rev. Martin Luther King, Jr. appealed to clergy from around the nation to join him for a ministers' march. Although Reeb recognized the risk—he had four young children—he felt compelled to answer King's call.

Reeb arrived in Alabama early on Tuesday, March 9th and spent the day at a relatively peaceful protest. He was returning from dinner with two other white ministers when they were suddenly assaulted by three white men shouting racial epithets. Jim Reeb was clubbed in the head and critically injured. The next day the front page of The Boston Globe carried a banner headline: "2 Hub Ministers Beaten—1 Badly— in Selma Street." Five hundred people gathered at the Federal Building to protest the "savagery" of the Alabama police.

"He was a peaceable man who became the victim of a wholly unprovoked attack."

The savagery was not new. Two weeks earlier, a police officer had shot to death a young black hospital worker as he tried to protect his mother from being beaten; but it was Jim Reeb's beating that caught the world's attention. As he lay unconscious in an Alabama hospital, the story spread across the nation and the world.

A friend later wrote that "the entire civil rights struggle suddenly came to a focus in him. . . . He was a white minister who had come to Selma to support the Negro cause. He was a peaceable man who became the victim of a wholly unprovoked attack."

When he died, early on March 11th, there was mourning—and outrage—around the country. The next day, Congress resounded with speeches denouncing the brutality and calling for government intervention. Deeply moved by the death of "that good man," President Lyndon Johnson instructed his aides to draft a voting rights bill.

James Reeb's sacrifice was recognized in small towns and big cities, in churches and synagogues, in editorials, songs, and poems. His biographer wrote, "No one knows how many tributes were paid. . . . Republican and Democrat, Protestant, Catholic, and Jew, rich and poor, Negro and white, all poured forth their lamentations and praise." In Boston, on the Saturday after his death, close to 30,000 people attended a memorial gathering.

James Reeb was a member of the Arlington Street Church congregation, at 351 Boylston Street in Boston.

In 1986, Congress created the Selma to Montgomery History Trail. Part five of a “webisode " developed in connection with the PBS series, “Freedom: A History of Us,” focuses on the events in Selma. American Friends Service Committee: James Reeb: Civil Rights Martyr

When in Boston, by Jim Vrabel (Northeastern University Press, 2004).

No Greater Love: The James Reeb Story, by Duncan Howlett (Harper and Row, 1966).

From Selma to Montgomery: The Long March to Freedom. New York: Routledge, 2014.