Now can there be any liberty, where property is taken away without consent? Can it with any colour of truth, justice or equity, be affirmed, that the northern colonies are represented in parliament? Has this whole continent of near three thousand miles in length, and in which and his other American dominions, his Majesty has, or very soon will have, some millions of as good, loyal and useful subjects, white and black, as any in the three kingdoms, the election of one member of the house of commons?

Is there the least difference, as to the consent of the Colonists, whether taxes and impositions are laid on their trade, and other property, by the crown alone, or by the parliament. As it is agreed on all hands, the Crown alone cannot impose them, we should be justifiable in refusing to pay them, but must and ought to yield obedience to an act of parliament, tho' erroneous, 'till repealed.

I can see no reason to doubt, but that the imposition, of taxes, whether on trade, or on land, or houses, or ships, on real or personal, fixed or floating property, in the colonies, is absolutely irreconcilable with the rights of the Colonists, as British subjects, and as men. I say men, for in a state of nature, no man can take my property from me, without my consent: If he does, he deprives me of my liberty, and makes me a slave. If such a proceeding is a breach of the law of nature, no law of society can make it just—The very act of taxing, exercised over those who are not represented, appears to me to be depriving them of one of their most essential rights, as freemen; and if continued, seems to be in effect an entire disfranchisement of every civil right. For what one civil right is worth a rush, after a man's property is subject to be taken from him at pleasure, without his consent. If a man is not his own assessor in person, or by deputy, his liberty is gone, or lays entirely at the mercy of others.

From The Rights of the British Colonies Asserted and Proved. By James Otis, Esq., 1764.

Is this the man that Otis Air Force Base was named for?
James Otis Jr.

Apparently this isn't the Otis for which the airbase is named. According to Wikipedia: "According to the 102nd Fighter Wing Public Affairs office Otis Air National Guard Base is named for pilot, flight surgeon, and eminent Boston City Hospital surgeon, Lt. Frank "Jesse" Otis, a member of the 101st Observation Squadron who was killed on Jan. 11, 1937 when his Douglas O-46A crashed while on a cross-country training mission." yours in history, darbaby www.DarleneBordwell.com
Login

On this day in 1768, James Otis, Jr. gave a characteristically fiery speech to his fellow legislators in Boston. He referred to the British House of Commons as a gathering of "button-makers, horse jockey gamesters, pensioners, pimps, and whore-masters." The colony's royal governor denounced Otis's tirade as the most "insolent. . . treasonable declamation that perhaps was ever delivered." Otis's speech in June 1768 was one of many that attacked Parliament for its efforts to squeeze more revenue from the American colonies. His insistence that "a man's house is his castle" and later that there be "no taxation without representation" remain etched in our collective memory long after his name, and his role in the events leading up to the Revolution, have been forgotten.

Time and again, in speeches and pamphlets, he would insist that "no one should be taxed without representation." 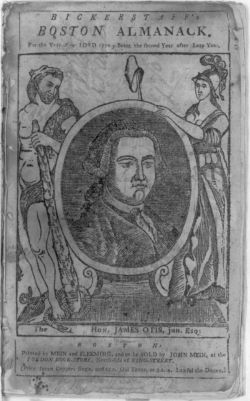 John Adams and Thomas Hutchinson, the Crown-appointed governor of Massachusetts between 1771 and 1774, agreed on at least one point: the story of the American Revolution began with James Otis, Jr. Fifty years after Otis delivered a blistering attack on the British use of Writs of Assistance (general search warrants), Adams wrote, "Then and there the child Independence was born." Yet, even before the first shots were fired at Lexington and Concord, James Otis had already disappeared from public view.

James Otis, Jr., was born in 1725 in the Cape Cod village of West Barnstable. A prominent figure in Massachusetts politics, his father represented Barnstable in the General Court for many years. James Jr. graduated from Harvard College in 1743 and then studied law under one of Boston's most respected attorneys.

The younger Otis began practicing in Plymouth but soon moved to Boston, where he quickly made a name for himself as one of the city's most brilliant lawyers. His legal skills, together with his political connections, won him appointments as justice of the peace in 1756 and, the following year, as advocate general, an even higher position.

He declared that "one of the most essential branches of English liberty is the freedom of one's home," and the warrants would violate that right.

In 1761 he resigned his post in protest over the Writs of Assistance. English authorities had decided to crack down on the colonial merchants and ship owners who had long avoided paying duties on imported goods. Rather than openly defying the Acts of Trade, which regulated commerce throughout the British Empire and benefited the Mother Country over everyone else, colonists simply engaged in extensive smuggling. In 1760 the Crown authorized the use of Writs of Assistance. These documents gave customs officials the right to search for contraband wherever they suspected it might be hidden. Had Otis remained as advocate general, it would have been his job to prosecute the smugglers.

Instead, he agreed to represent Boston's merchants — for free. In February 1761 he made a five-hour presentation before a panel of justices. He argued that the Writs were "instruments of slavery" allowing any "petty officer" to act as a "tyrant." He declared that "one of the most essential branches of English liberty is the freedom of one's home," and the warrants would violate that right. In spite of the eloquence and power of his arguments, Otis failed to convince the justices; they ruled that the writs were legal.

Suddenly Otis had the attention and respect of more than just the judicial and political elite. Two months later, Boston voters elected him to represent them in the General Court. He would serve there for most of the next ten years.

"The very act of taxing, except over those who are represented, appears to me to be depriving them of one of their most essential rights as freemen."

Like many other colonists, Otis became disenchanted with England only gradually. While he objected to the governor spending money without the legislature's consent, in 1762 he still believed that "the British Constitution of government, as now established in His Majesty's person and family, is the wisest and best in the world." The king was the "most glorious monarch upon the globe and his subjects the happiest in the universe."

Over the next two years, his views grew more radical. In a 1764 pamphlet, The Rights of the British Colonies Asserted and Proved, he returned to the issue of how revenue was raised and spent. "The very act of taxing, except over those who are represented, appears to me to be depriving them of one of their most essential rights as freemen." Time and again, in speeches and pamphlets, he would insist that "no one should be taxed without representation."

Otis became more and more involved in the struggle against royal control. When Parliament passed the Townshend Act imposing new taxes on the colonies, he and Samuel Adams drafted an open letter to all the colonies denouncing the law as "obviously unconstitutional" and urging collective action to get it repealed. By then the king had appointed Thomas Hutchinson Governor of Massachusetts. Hutchinson demanded that the letter be retracted. On June 21, 1768, James Otis delivered his response on the floor of the General Court. After nine days of debate, the Massachusetts House voted 92 to 17 to defy the governor.

"I hope when God Almighty, in his righteous providence, shall take me out of time into eternity, that it will be by a flash of lightening."

These were tense times for the men and women of Massachusetts. In Otis's own family, his wife and father-in-law were staunch Loyalists. Most colonists still regarded themselves as British subjects. To speak against the king or parliament was nothing less than treason. Tempers were running high. On September 5, 1769, a Boston customs collector offended by something Otis had written attacked him with a sword, fracturing his skull. Otis had already shown signs of mental instability; after the assault, his sister wrote, "the future usefulness of this distinguished friend of his country was destroyed, reason was shaken from its throne."

In January 1770, John Adams remarked sadly that the man he had once described as "a flame of fire" now "rambles and wanders like a ship without a helm." At the State House he broke windows, burned his papers, and fired his rifle. In 1771 he was "judged a lunatic" and the court appointed his brother to be his guardian.

Eventually, Otis moved in with an old friend in Andover and lived the remaining years of his life there. In a letter to his sister, he wrote, "I hope when God Almighty, in his righteous providence, shall take me out of time into eternity, that it will be by a flash of lightening." And so it was. On May 23, 1783, James Otis stood in the doorway chatting with his friends who were seated inside. Suddenly a storm came up. Thunder shook the house, and a bolt of lightning struck him dead. He was 58 years old.

Visitors to the Old State House in Boston learn about the series of events in which James Otis, Jr., participated that led to the beginning of the American Revolution.

On this day in 1803, the fiery patriot Samuel Adams died at the age of 81. A complete failure as a businessman, he was a brilliant political organizer, a talented writer, and a passionate public...