I would like to say that I am not a transient in the area . . . As oldtimers in Provincetown and on the cape used to say when I was a boy here – and I was born here – whenever anyone asked them where they were born, they would say, "I was Cape Cod born and Cape Cod bred, and when I die I am going to be Cape Cod dead." That is about the way I feel. I have made my life, my future my career here . . .

We must watch that in the creation of something we do not destroy something greater. Each of these towns has its own individual economy. We have in the town of Provincetown a town crier who goes through the streets crying out the news of the day, making certain announcements, and that is a tradition which has been carried on from colonial days. He is dressed in a pilgrim outfit.

Now, it would be fine, if here on the lower cape, all of those who may not otherwise be gainfully employed could dress in hip boots, walk up and down the streets in beards with a sou'wester and have a lobster pot slung over their shoulders or if we could be out in the dunes or be out in the bogs with berry scoops and look like characters and the rest of us dress in pilgrim suits. Unfortunately, the facts of life are otherwise.

Although we may be characters, in the broader sense of the word, we at the same time must protect the economy of our area.. . . I think that the future of the area, the future of all of the other towns of the cape can best be protected as well as the national interest be asserted by taking not all of the lands which have been proposed, but a part of the land which will serve the purposes announced by the Park Service, and by the executive branch of the Government, a park that will be adequate, a park that will be ample, but a park which will not destroy the remainder of the cape.

From the "Hearings before the Subcommittee on Public Lands on the consideration for the establishment of the Cape Cod National Seashore Park," December 16 and 17, 1960, Eastham, Massachusetts.

On this day in 1961, President John F. Kennedy signed a bill authorizing the establishment of Cape Cod National Seashore. A long-time summer resident of the Cape, J.F.K. had co-sponsored the legislation while in the Senate. The goal, he wrote, was "to preserve the natural and historic values of a portion of Cape Cod for the inspiration and enjoyment of people all over the United States." This was the first time the federal government had created a national park out of land that was primarily in private hands. Months of hearings and meetings were required to produce a bill that balanced private and public interests. Today the Seashore encompasses more than 43,000 acres and draws more than 4,000,000 visitors a year.

In 1954, when the NPS conducted a study of land holdings on the eastern shoreline, it found that only 240 miles (6.5%) of coastal land was in state or federal hands, available for public recreation. 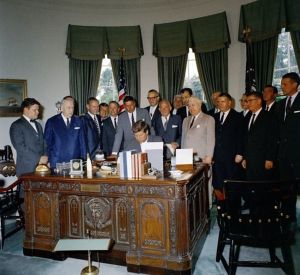 While the steady growth of tourism in the 1900s helped Cape Codders recover from the decline in the fishing industry, the rapid pace of development threatened the very things that residents and visitors alike found so appealing. As one resident put it in 1961, "the resources which were once believed inexhaustible [are] vanishing before our eyes." Few doubted the need to protect these resources. The question was how.

The National Park Service had looked at the possibility of protecting the Massachusetts coast from Duxbury Beach to the tip of Cape Cod as early as 1939. After Pearl Harbor, all non-war related budgets were cut, and the Park Service dropped the idea. In 1954, when the NPS conducted a study of land holdings on the eastern shoreline, it found that only 240 miles (6.5%) of coastal land was in state or federal hands, available for public recreation. The report identified 16 priority areas for possible acquisition. The Great Beach on Outer Cape Cod, "the longest unbroken and undeveloped sweep of beach in New England," headed the list.

As one resident put it in 1961, "the resources which were once believed inexhaustible [are] vanishing before our eyes."

The following year, NPS began an 18-month detailed survey to evaluate the biological, geological, archaeological, historical, and scenic resources of the six towns that make up the Outer (also called the Lower) Cape — Chatham, Eastham, Orleans, Wellfleet, Truro, and Provincetown. The results showed that it was not just the beach that needed protection but upland areas as well. The NPS proposed a park that would encompass, for example, half of Wellfleet and 70% of Truro. Unlike other national parks, a "national seashore" on Cape Cod would include large numbers of commercial and residential properties.

Residents of the affected towns voiced concerns even before the report was released in March 1959. Chief among them was the widespread use of eminent domain. People objected to the government taking — albeit for a fair market price — property that in some cases had been in their families for generations. The NPS held a series of public meetings. As residents expressed their fears, NPS director Conrad Wirth repeated his pledge that "negotiation will be our rule."

"The most important and complicated problem before us is to preserve the scenic and historic features of Cape Cod without injuring and unduly restricting the towns and individual citizens directly concerned," Saltonstall told the subcommittee that was considering the bill.

Massachusetts Senators John F. Kennedy and Leverett Saltonstall were both strong supporters of the plan. Their legislative aides, Fred Holborn and David Martin, immediately went to work crafting a bill. Legislation providing "for the establishment of Cape Cod National Seashore" was introduced in the Senate on September 3, 1959, and Cape Cod Congressman Hastings Keith sponsored an identical bill in the House. These were unique pieces of legislation.

"The most important and complicated problem before us is to preserve the scenic and historic features of Cape Cod without injuring and unduly restricting the towns and individual citizens directly concerned," Saltonstall told the subcommittee that was considering the bill. Also for the first time, Congress was being asked to use public monies to buy private land for a national park. The bill came up with a creative solution to the challenge posed by this taking of property. It proposed freezing things as they were. Later the NPS established different zones for the park and gave owners different options depending on the condition and location of their property.

"I think the time has passed when we old timers can hope that Cape Cod will stay the way it is . . . we have absolute proof it is going to change, and then the issue is, should it be done by bulldozers?"

In June 1960, the House and Senate subcommittees held hearings but did not take a vote; the bill died. More hearings were held on the Cape. A Truro resident summed up the emerging consensus: "I think the time has passed when we old timers can hope that Cape Cod will stay the way it is . . . we have absolute proof it is going to change, and then the issue is, should it be done by bulldozers? by money-mad people? by banks wanting to lend? by builders wanting quick jobs? by loans sharks? Or is it to be done by the U.S. Government in another manner?"

On January 3, 1961, the first day of the 87th Congress, representatives from Massachusetts reintroduced the bill. On June 27th, the Senate passed it unanimously. A few weeks later, the House passed a similar bill. On August 7th, seven months after moving into the White House, President Kennedy signed the Cape Cod National Seashore bill. In his remarks, he told the assembled dignitaries, "From personal knowledge I realize very well how useful this is going to be for the people of the Cape and Massachusetts and New England and the entire United States."

The Birth of the Cape Cod National Seashore, by Francis P. Burling (The Leyden Press, 1978).