This was undoubtedly an historic moment, but it might be more beneficial to your readers to post an event that contributes positively to our history.
Islamic Society

I respectfully disagree. Our nation was founded on the ideal of respect and freedom for all. While we all condem the attacks of 9/11 we should realize that the actions of a few do no represent the feelings of all Muslums and intolerance of anyone simply because of what faith they belive is wrong and contrary to the values we hold dear.
Login

On this day in 2002, the Islamic Society of Boston held a ceremonial groundbreaking in Roxbury for New England's largest mosque and Islamic cultural center. The Society had grown from a handful of Cambridge-based students in the 1970s to more than 250 families. The effort to build a new facility met with controversy and delay. In 1999 the city sold the Society a piece of land, but it took years to complete the permitting process, overcome neighborhood resistance, and find a way around the Islamic prohibition against borrowing money with interest. After the events of 9/11, accusations that extremists were backing the project caused suits, counter suits, and delays. The Islamic Society defended itself, persisted, and celebrated the opening of the cultural center in 2009.

As early as 1934, seven Quincy families joined with other Arabic-speaking Muslims in the area to form an Islamic cultural, social, and charitable society. 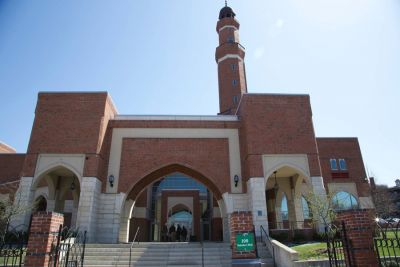 The first Muslims in Massachusetts were almost certainly enslaved Africans whose spiritual heritage was largely suppressed. Muslims from the Middle East, particularly from Lebanon and Syria, came to the Boston area in the early 1900s. Sudanese stone workers and other Muslim families found jobs in and settled near the Quincy granite mines. As early as 1934, seven Quincy families joined with other Arabic-speaking Muslims in the area to form an Islamic cultural, social, and charitable society. The Arab American Banner Society, as it was called, held services and religious classes in an old house on South Street in Quincy for 30 years. In 1964 the group built the first mosque in Massachusetts.

At the same time, interest in Islam was also growing among the African American population, as thousands of black Americans joined the Nation of Islam during the strife-ridden civil rights era. Malcolm X and later Louis Farrakhan gained a large Nation of Islam following in Dorchester in the 1960s. In the next decade, the leader of the Dorchester mosque moved his congregants away from the Nation of Islam's separatist teachings towards mainstream Islam.

But it was the growing numbers of Muslim students from abroad who stayed on after their training that caused the largest increase in Boston's Islamic population. In 1958 three Harvard students — an African American, a Sudanese, and a Palestinian — organized the Harvard Islamic Society. In 1981 Muslims affiliated with Harvard, M.I.T., Boston University, Northeastern, Wentworth Institute, Suffolk, and Tufts formed the Islamic Society of Boston (ISB). The group held social events, sponsored lectures, and gathered for prayer on the M.I.T. campus.

By 1991 the ISB needed more space. The Society purchased a duplex on Prospect St. in Cambridge, and in 1994 renovated a Knights of Columbus Hall nearby into a mosque. The new facility drew Muslims from throughout the metropolitan area. Within four years, 1,000 worshipers were attending Friday prayers, with overflow crowds spreading prayer carpets in the parking lot. The Islamic Society of Boston once again needed a larger home.

Society leaders envisioned more than just a new building. They planned a cultural center that would include a mosque with prayer rooms to accommodate 1,200 men and 400 women, classrooms, and space for cultural and community activities. In addition to serving Muslims, the center would reach out to the surrounding community, providing a variety of programs and services.

The Boston Redevelopment Authority liked the plan. In 1999 it offered the ISB the opportunity to purchase land in Roxbury for a fraction of the market price in exchange for cultural investment in the community and a promise to maintain adjacent parks. In January of 2001, the Islamic Society hosted city officials at a celebration of the new venture. The Society looked forward to an early opening.

The ISB declared that it "does not condone any action or speech that supports or encourages acts of terrorism on American soil or elsewhere in the world."

But the road ahead proved challenging. An architect donated the design — a striking red brick mosque with pointed arches, a 125-foot minaret, and a 75-foot dome, accentuated by ceramic tile and calligraphy. But the process of acquiring the necessary city permits inched along. At the same time, Muslim prohibitions against borrowing money with interest complicated the already daunting fundraising task. The Society embarked on an international campaign, eventually working out an arrangement with the United Bank of Kuwait allowing the ISB to lease the building until it had paid enough rent to cover the bank's investment.

Then came 9/11. In the aftermath of the World Trade Center attack, the Boston Herald and later Fox News broadcast stories claiming that Islamic extremists had founded and supported the ISB and that the Roxbury center was implicated in promoting a "Middle Eastern agenda of terrorism."

The ISB immediately refuted "the defamatory and vilifying remarks" as libelous. The Society's leaders explained that the alleged "extremist founder," Abdurahman Alamoudi, was a student during the ISB's early days. He had had no contact with the Society since he left Boston in 1984. While it was true that funds had been donated from abroad, the Society had a Know Your Donor program that required background checks for all donations exceeding $5,000; donors were cross-checked against the U.S. terrorist watch list. The ISB declared that it "does not condone any action or speech that supports or encourages acts of terrorism on American soil or elsewhere in the world."

The ISB was determined to "move ahead and assume a place as a moderating influence and welcoming presence."

But the damage was done. Rumors began to circulate that the funding for the mosque was coming from Saudi Arabia and that backers included terrorists. Many of the metro area's 60,000 to 70,000 Muslims felt defensive, especially when the Boston City Council called for an investigation into the terms of the sale of the BRA land. A group calling itself "Citizens for Peace and Tolerance" accused the ISB of fostering Muslim extremism. The Society responded, "We are disappointed that [they] have chosen to ignore our responses and, instead, decided to capitalize on the current political climate to promote fear and hysteria. . ."

The ISB was determined to "move ahead and assume a place as a moderating influence and welcoming presence." Leaders pledged to screen teachers and prayer leaders to prevent any statements of extremism or religious hatred. Litigation and financial problems delayed the project. Originally scheduled to open in the winter of 2006, the mosque and cultural center opened in June of 2009. In addition to the mosque, the 70,000 square foot center houses a school, cafe, social service organization, ritual spaces, and multipurpose space for functions and events. Plans for the future include a library and exhibition space.

Tours of the Islamic Society of Boston Cultural Center are available by appointment.

Islamic Society of Boston, "Fact Sheet in Response to Boston Herald Article of January and March 2004".

On this day in 1946, 20-year-old Malcolm Little entered the state prison in Charlestown to begin serving a sentence for burglary. While in jail, he joined the Black Muslims, a new branch of Islam. Burning...