From The History of Printing in America, by Isaiah Thomas (1810)

It was at first the determination of Thomas that his paper should be free to both parties which then agitated the country, and, impartially, lay before the public their respective communications; but he soon found that this ground could not be maintained. The dispute between Britain and her American colonies became more and more serious, and deeply interested every class of men in the community. The parties in the dispute took the names of Whigs and Tories; the tories were the warm supporters of the measures of the British cabinet, and the whigs the animated advocates for American liberty. The tories soon discontinued their subscriptions for the Spy; and the publisher was convinced that to produce an abiding and salutary effect his paper must have a fixed character. He was in principle attached to the party which opposed the measures of the British ministry; and he therefore announced that the Spy would be devoted to the support of the whig interest….

The printer of the Massachusetts Spy, or Boston Journal, was obliged to leave Boston, as has been mentioned, on account of the commencement of hostilities between the colonies and the parent Country. He settled in this place, and on the 3d of May, 1775, recommenced the publication of that paper, which he continued until the British troops evacuated Boston; when he leased it for one year to William Stearns and Daniel Bigelow . . . At the end of that term, the proprietor returned to Worcester, and resumed its publication, with a new motto—"Unanimity at Home, and Bravery and Perseverance in the Field, will secure the Independence of America." . . .

At the conclusion of the war the Spy was enlarged, and each page contained five volumes. It was printed from new types; and the motto was changed to '"Noscere res humanas est Hominis. Knowledge of the world is necessary for every man."

On this day in 1812, the American Antiquarian Society was founded as a result of the work of printer, publisher, and collector Isaiah Thomas and the Massachusetts General Court. Thomas moved his printing press to Worcester, Massachusetts, to keep it out of British hands during the American Revolution, and relocated his publishing business to the city. Thomas continued to work in publishing and related trades after the war, which allowed him to accumulate great wealth. His collection of 18th century documents and his library became the core of the AAS collection. Today, the American Antiquarian Society continues to preserve archival materials dating from early American to 1876 to support scholarly research. The Society also hosts fellows and offers lectures, workshops, and other programs that highlight its collections related to printing, publishing, and visual culture.

The paper carried eyewitness accounts of the battles of Lexington and Concord, which helped solidify support for the Patriot cause in the early days of the conflict. 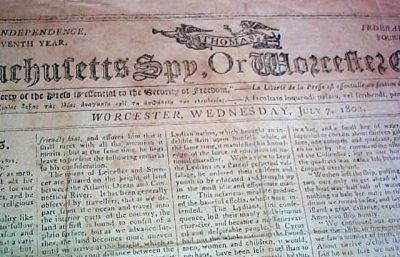 In the years leading up the Revolution, Isaiah Thomas played a critical role in rousing the people of Massachusetts to resist British rule. As the publisher of the ardently pro-independence Massachusetts Spy, he understood the power of newspapers to stir people to action. He used his paper so effectively that the British eventually sought his arrest and execution. Thomas managed to escape with his printing press to the relative safety of Worcester; from there he continued to provide news and promote the American cause throughout the war.

Isaiah Thomas was born in Boston in 1749. His father deserted the family a few years later, leaving his mother with five children and no means to support them. The family was in such desperate straits that the city's Overseers of the Poor arranged for six-year-old Isaiah to be apprenticed to the printer Zechariah Fowle. Fowle taught the boy to set type, and Isaiah is said to have learned his alphabet and his type blocks at the same time. Thomas was a quick student and by the time he was in his teens, he was managing the print shop and was considered to be an excellent printer.

In time, conflict between the master and his precocious apprentice prompted the younger man to leave Boston. He dreamed of going to London. He wandered from Nova Scotia to South Carolina, taking temporary printing jobs along the way but could not raise the money for the trip abroad. Finally, in 1770, the restless 21-year-old returned to Boston. He reconciled with Fowle, and the two became partners. They began publishing the The Massachusetts Spy. Fowle soon retired, and Thomas continued the business on his own.

The British considered Thomas so dangerous that he later recalled "he had the honor of being included with John Hancock and Samuel Adams in a list of twelve persons who were to be summarily executed when taken."

By 1770, many people in Boston were coming to resent British policies towards the colony. Young Isaiah Thomas strongly supported the cause of independence. He was allied with John Hancock, Paul Revere, and other Boston Patriots. The Sons of Liberty were rumored to meet at the offices of the Spy. The British considered Thomas so dangerous that he later recalled "he had the honor of being included with John Hancock and Samuel Adams in a list of twelve persons who were to be summarily executed when taken."

Each time Thomas printed an article critical of the British, he placed his shop and his personal liberty at risk. British officials considered such public attacks the acts of a traitor. In 1771, an irate Governor Thomas Hutchinson ordered that Thomas be prosecuted for malicious libel, but the grand jury refused to indict the printer. There were still plenty of Bostonians who supported the British, and they hanged Isaiah Thomas in effigy. British soldiers paraded before the Spy office, and Thomas was threatened with tarring.

Thomas was undeterred. He was determined to use his printing press to undermine British authority. At night, he secretly published handbills for the Sons of Liberty. He arranged for special post riders to exchange news and papers with like-minded citizens in other colonies. Thomas knew that stories of British abuse of American rights made people angry and spurred them to action.

According to family legend, Thomas was the first person in Massachusetts to read the Declaration of Independence when the express rider carrying it from Philadelphia to Boston stopped in Worcester.

Three days before the eventful morning of April 19, 1775, Thomas came to the conclusion that he could not safely remain in Boston. As he later wrote, referring to himself in the third person, he "had rendered himself very obnoxious to the friends of the British administration; and, in consequence, the tories and some of the British soldiery in the town, openly threatened him with the effects of their resentment . . . He was induced to pack up, privately, a press and types, and to send them in the night over Charles river to Charlestown, whence they were conveyed to Worcester."

As soon as the printing press reached Worcester, however, he resumed publishing the Spy. The paper carried eyewitness accounts of the battles of Lexington and Concord, which helped solidify support for the Patriot cause in the early days of the conflict.

Like so many other Massachusetts businessmen, Thomas suffered financially during the war. The number of subscribers to the Spy fell from 3,500 before the war to 200. Everything but the printing press he managed to move to Worcester was destroyed or stolen during the British occupation of Boston.

According to family legend, Thomas was the first person in Massachusetts to read the Declaration of Independence when the express rider carrying it from Philadelphia to Boston stopped in Worcester. It was July 14, 1776, and Isaiah Thomas took the document to the steps of the meetinghouse and read it aloud to a crowd of rejoicing citizens.

In 1812, he used his considerable wealth to establish a society dedicated to preserving the "literature of liberty"— the newspapers, broadsides, books, pamphlets, and letters that had shaped public opinion during the revolutionary period.

Thomas settled in Worcester where he eventually prospered as a printer and bookseller. He owned a printing house in Worcester and another in Boston; together they housed 16 presses. He also owned bookstores in Massachusetts, New Hampshire, Albany, New York, and Maryland. He wrote A History of Printing in America and amassed a personal library of 8,000 volumes.

In 1812, he used his considerable wealth to establish a society dedicated to preserving the "literature of liberty"— the newspapers, broadsides, books, pamphlets, and letters that had shaped public opinion during the revolutionary period. He donated his private library and a generous endowment. Then he personally visited newspaper offices and purchased as many back issues as he could. He believed that newspapers were the single best records of the thoughts and actions of common people — the people who made the revolution a success. Located in Worcester, Thomas's American Antiquarian Society is today the most complete private repository of American printed works through 1876 and a lasting tribute to one man's passionate faith in the power of the printed word.

Free public tours of the American Antiquarian Society are given every Wednesday afternoon at 3 PM.

A summary of his Thomas's life interspersed with autobiographical excerpts is available on the website of Assumption College's E Pluribus Unim Project: www1.assumption.edu/ahc/1770s/print/isaiahthomasbio.html

Learn more about the American Antiquarian Society and how to access their collections:www.americanantiquarian.org/about.htm