To the Governor & Council of the State of Massachusetts

We say in the voice of one man that we are distressed and degraded daily by those men who we understand were appointed by your honors. That they have the rule of everything. That we are not consulted, it is true, and if we are, they do as they please and if we say one word then we are called poor drunken Indians when in fact we are not….

[A]ll of our priviliges (sic) are in a measure taken from us. Our people are foresaken (sic) – many of them sleep upon the cold ground and we know not why it should be so, when we have enough if properly managed to supply all our wants….

There is much more, but we think that this is sufficient to satisfy you. Knowing that if we were whites, one half would be enough for redress – and now in consideration thereof and believing that you sirs would do the same – we as proprietors of the soil proud to return your honors thanks for the interest that we believe that you have taken in our welfare yet afore. With a cheering hope that we one day would take care of ourselves believing that you will comply with our wishes and resolutions, and discharge those men, as we have several good trusted men who are capable men who are about to be chosen officers by us and who undoubtedly will come in contest with them. For if we do not take such measures in five years our property will be gone…

That we as a Tribe will rule ourselves, and have the right to do so for all men are born free and Equal, says the constitution of the country.

That we will not permit any white man to come upon our plantation to cut or carry off wood or hay or any other article, without our permission after the first of July next.

That we will put said resolution in force after the date of July next with the penalty of binding and throwing them off the plantation if they will not stay away without.

Done in behalf of the Mashpee Tribe [and signed by 108 men and women].

Quoted in The Wampanoags of Mashpee, by Russell Peters (n.p., 1987)

On this day in 1833, the Mashpee of Cape Cod signed what amounted to an Indian Declaration of Independence. They reminded officials in Boston that "all men are born free and Equal, as says the constitution of the country" and spelled out the details of what had become an intolerable situation — the appropriation of their woodlots, hay fields, pastures, and shellfish beds by whites. The Mashpee declared that they would take action against further encroachment by white settlers. A group of Barnstable farmers decided to test the tribe's resolve. When they arrived to cut wood on Mashpee land, the tribe resisted, and a violent confrontation followed. Fearing an insurrection, the legislature granted the Mashpee the right of self-government in 1834.

The Old Indian Meeting House in the town of Mashpee is the oldest church on Cape Cod and the oldest Native American church in the United States. 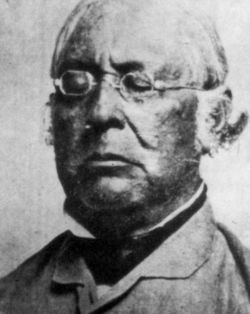 The Cape Cod town of Mashpee began as a refuge for Wampanoag Indians who had been forced off other Cape lands by English settlers. In what became known as the "Indian town," the remnants of native tribes from southeastern Massachusetts lived according to traditional ways — sharing ownership of the land and natural resources.

English settlers first began claiming title to land on the Cape in the mid-1600s. Like other Native American tribes, the Wampanoags did not recognize private land ownership. They were accustomed to moving with the seasons. When colonial settlements first impinged on their temporary village sites, the Indians simply moved elsewhere. Sometimes they accepted gifts in exchange for allowing the settlers to use the land, not realizing that, according to English custom, they had "sold" the land and lost all future rights to it.

However, they soon learned the significance of ownership and moved to protect themselves. In 1665 two Wampanoag chiefs deeded the land in and around Mashpee to the Indians "forever; so not to bee given, sold, or alienated from them by anyone without all their Consents thereunto." Once recorded in Plymouth Court, the deed should have protected the Mashpee land from encroachment.

After King Philip's War, American Indian survivors from southeastern Massachusetts migrated to Mashpee. But even as the number of inhabitants increased, the amount of land controlled by Indians continued to shrink. Surrounding communities kept redefining their borders, resulting, in the words of one historian, "in zigs and zags and an occasional cut into [Mashpee's] border. . . where a desirable piece of Indian land was taken over by an English person."

In 1665 two Wampanoag chiefs deeded the land in and around Mashpee to the Indians "forever; so not to bee given, sold, or alienated from them by anyone without all their Consents thereunto."

In 1763 the General Court incorporated Mashpee as a "plantation" or district belonging to the Native Americans residents. Believing that Native people were incapable of running their own affairs, the lawmakers appointed white overseers. During the Revolutionary years, when the rhetoric of freedom was heard throughout the land, the Indians repeatedly petitioned for self-government and were repeatedly turned down. They fared no better with the legislature of the new state of Massachusetts.

In the early 1800s, the Indians living in Mashpee became increasingly frustrated with the status quo. As the population of the Cape grew, so did pressure on its resources; it became common practice for white residents from other towns to cut firewood in Mashpee's woodlands and to take shellfish from Mashpee waters.

Although the Indians protested, the overseers took no action. Even worse, the overseers allowed white farmers from other towns to lease grazing land in Mashpee. When the Indians protested, their complaints were ignored. The Indians were also distressed that the white minister assigned to Mashpee had so little respect for Native people that he discouraged them from attending his services and barred "Blind Joe" Amos, a Native preacher, from the Indian Meetinghouse. Amos led the Native Americans in worship outside under the trees.

In 1833 the self-educated Methodist preacher William Apess arrived in Mashpee. A Pequot Indian, Apess was an itinerant missionary who moved about New England preaching to the scattered remnants of native communities. He was appalled by what he found in Mashpee.

Apess and Amos helped the council draft a formal protest. It drew heavily on words written by the Founding Fathers.

A gifted speaker and writer, Apess was well-versed in the new nation's founding documents. He inspired the Mashpee to seek independence from the white overseers. Under his leadership, the Mashpee elected a 12-man council to challenge white guardianship of their district.

On May 21, 1833, Apess and Amos helped the council draft a formal protest. It drew heavily on words written by the Founding Fathers. The Mashpee demanded to be free of the overseers, whom they referred to as their "masters."

The document set forth their chief grievances. Governance by white outsiders, who refused to consult the tribe about anything, was demeaning and intolerable. The Mashpee asserted their right to rule themselves. The overseers misused their authority to dispose of Native American property as they pleased: meadows and woodlots were auctioned off, other land was rented out, and white farmers were permitted to let their cattle graze on Indian pastures and to take fish from Indian waters. The Mashpee lived in poverty while the white men charged to oversee them grew rich.

The document concluded with a resolution: As of July 1, 1833, the Indians of Mashpee would no longer tolerate encroachment on their lands. They would not "permit any white man to come upon our plantation to cut or carry our wood or hay . . . without our permission." Almost 100 women and men signed the petition.

White residents of Massachusetts were alarmed, fearing violence. Stories about a potential "Woodlot War" ran in the press, and Governor Levi Lincoln promised to call out the state militia if necessary.

They would not "permit any white man to come upon our plantation to cut or carry our wood or hay . . . without our permission."

On July 1st, in a test of the Indians' resolve, two men from nearby Barnstable arrived in Mashpee and began to cut wood on Wampanoag property and load it into their wagons. The Indians objected and unloaded the wagons. "Very bitter language" was used, and the white men left. Soon after, court officers arrested William Apess and several other native men and charged them with "riot, assault, and trespass." All were convicted and Apess sentenced to 30 days in jail.

But the confrontation brought change. A delegation sent from Boston to investigate the dispute produced a scathing report. By March of 1834, Boston abolitionist William Lloyd Garrison had taken up the Mashpees' cause. He helped pressure the legislature to create the Indian District of Mashpee. For the first time in nearly 200 years Indians living on Cape Cod gained the right to govern themselves. Mashpee was incorporated as a town in 1870.

Today the Mashpee have the largest native population in Massachusetts with approximately 1500 members. The Old Indian Meeting House in the town of Mashpee is the oldest church on Cape Cod and the oldest Native American church in the United States.

Timeline of Mashpee history We The Petitioners: Rewriting the History of Massachusetts’s Native Americans

Entry on William Apess, by Barry O'Connell, in Encyclopedia of North American Indians

The Wampanoags of Mashpee, by Russell M. Peters (Nimrod Press, 1987).

On Our Own Ground: The Complete Writing of William Apess, a Pequot, ed. with an introduction by Barry O'Connell (University of Massachusetts Press, 1992).