From James Henry Gooding, Corporal in the Mass 54th, to President Abraham Lincoln

Your Excelency will pardon the presumtion of an humble individual like myself, in addressing you. but the earnest Solicitation of my Comrades in Arms, besides the genuine interest felt by myself in the matter is my excuse, for placing before the Executive head of the Nation our Common Grievance:

On the 6th of the last Month, the Paymaster of the department, informed us, that if we would decide to receive the sum of $10 (ten dollars) per month, he would come and pay us that sum, but, that, on the sitting of Congress, the Regt would, in his opinion, be allowed the other 3 (three.) He did not give us any guarantee that this would be…

Now the main question is. Are we Soldiers, or are we LABOURERS. We are fully armed, and equipped, have done all the various Duties, pertaining to a Soldiers life, have conducted ourselves, to the complete satisfaction of General Officers, who, were if any, prejudiced against us, but who now accord us all the encouragement, and honour due us….Mr President. Today, the Anglo Saxon Mother, Wife, or Sister, are not alone, in tears for departed Sons, Husbands, and Brothers. The patient Trusting Decendants of Africs Clime, have dyed the ground with blood, in defense of the Union, and Democracy.

When the war trumpet sounded o'er the land, when men knew not the Friend from the Traitor, the Black man laid his life at the Altar of the Nation, — and he was refused. When the arms of the Union, were beaten, in the first year of the War, And the Executive called more food, for its ravaging maw, again the black man begged, the privelege of Aiding his Country in her need, to be again refused, And now, he is in the War: and how has he conducted himself?… Obedient and patient, and Solid as a wall are they. All we lack, is a paler hue, and a better acquaintance with the Alphabet.

Now Your Excellency, We have done a Soldiers Duty. Why cant we have a Soldiers pay? You caution the Rebel Chieftain, that the United States, knows, no distinction, in her Soldiers: She insists on having all her Soldiers, or whatever, creed or Color, to be treated, according to the usages of War. Now if the United States exacts uniformity of treatment of her Soldiers, from the Insurgents, would it not be well, and consistent, to set the example herself, by paying all her Soldiers alike?… We appeal to You, Sir: as the Executive of the Nation, to have us Justly Dealt with. The Regt, do pray, that they be assured their service will be fairly appreciated, by paying them as american SOLDIERS, not as menial hierlings.

Please give this a moments attention

Quoted in Free at Last: A Documentary History of Slavery, Freedom and the Civil War ed. by Ira Berlin et al. (New Press, 1992)

Like many other people, I only learned of Massachusetts' 54th throught the film "Glory". Sad, because I've lived in Mass all my life. Sad, also, because I've always been an advocate of equality. Equality of the races, sexes and all of humanity in general. Why hadn't I known about this? But, now that I do, I am honored to be a part of the history it plays in Massachusetts, the Civil War and in the battles the black people faced, and, to some degree, still face. Thank you for this site and others that may come. ------------------------- Equality, as Freedom, must constantly be guarded and fought for
Read THIS book!

For an EXCELLENT first-person account, read "A Brave Black Regiment: History of the Fifty-Fourth Regiment of Massachusetts Volunteer Infantry, 1863-1865" by Captain Luis F. Emilio. The author fought with the 54th and survived the assault on Ft. Wagner which he describes.
Login

On this day in 1897, Augustus Saint-Gaudens' Robert Gould Shaw Memorial was unveiled on the Boston Common. The life-sized bas relief is also a monument to the solders of the Massachusetts 54th Regiment, one of the first regiments of black soliders to serve in the Civil War. Almost immediately following the discharge of the regiment's members, the black community in Boston launched a drive to erect a memorial to the 54th. It would be more than 30 years before the memorial was completed. The result of 12 years work by the great American sculptor Augustus Saint-Gaudens, it was the first monument in the country that included African American soldiers in full uniform.

Colonel Shaw died and was buried in a common grave alongside 74 of his men. 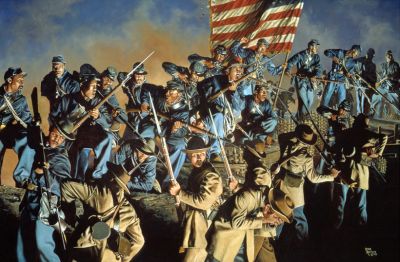 From the very beginning of the Civil War, African American men sought to enlist in the Union Army. Their requests were denied. This was a "white man's war," they were told, being fought to preserve the Union. African Americans knew better. The "Negro is the . . . pivot upon which the whole rebellion turns," said Frederick Douglass. Finally with the signing of the Emancipation Proclamation and the demand for new recruits outstripping supply, the Lincoln administration agreed to enlist black men. Only white men, however, could serve as officers.

Early in 1863, the abolitionist governor of Massachusetts, John A. Andrew, requested permission from the War Department to form a regiment of black soldiers. Barracks were built at Camp Meigs in Readville (the Hyde Park section of present-day Boston), and recruitment began.

The enthusiasm of Bay State African Americans was tempered by their exclusion from the officers' corps. The governor assured them that black soldiers would be treated equally; they would receive the same pay and the same benefits as white recruits. Still, there was hesitation. Of the 1,007 men who enlisted, only 133 were from Massachusetts. Of these, 27 were from Boston, 39 from the whaling port of New Bedford, and 33 from Berkshire County, where a black Congregationalist minister was an active recruiter.

Fathers enlisted with sons, and brothers signed on together — among them two of Frederick Douglass's sons. 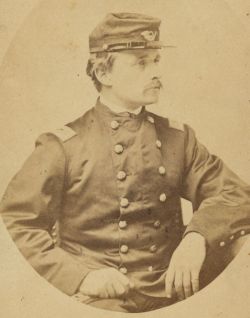 Every effort was made to accept only the healthiest volunteers; approximately a third of the men who responded to the call were turned away. In selecting the white officers, Governor Andrews looked for "young men of military experience, of firm Anti-Slavery principles, ambitious, superior to a vulgar contempt for color; and have faith in the capacity of Colored men for military service." The governor asked Robert Gould Shaw, the only son of one of Boston's leading abolitionist families, to assume command of the regiment.

The stakes were high. The Confederacy had announced that any black man who was captured fighting for the Union would be enslaved. (In fact, some were summarily executed.)

But by the middle of May, over a thousand black men from 24 states —15 northern, five southern, and four border states — had been accepted into the Massachusetts 54th. About a quarter of the regiment was made up of farmers, another third, laborers. There were barbers and seamen, waiters and teamsters, cabinetmakers, a dentist, and a druggist. Fathers enlisted with sons, and brothers signed on together — among them two of Frederick Douglass's sons.

On May 18th, Colonel Shaw received his orders. The 54th was to proceed to Beaufort, South Carolina. On the 28th, the regiment marched through the streets of Boston, which were lined with thousands of well-wishers, to the State House. Following remarks from the governor and other dignitaries, they paraded to the harbor and boarded the ships that would take them south.

"It was a tremendous moral victory. Black troops had proved every bit the equal of their white brothers."

One of their first engagements came on July 18th at Fort Wagner, a formidable earth and sandbag fortification on Morris Island, at the mouth of Charleston Harbor. As depicted in the film "Glory," Colonel Shaw led 600 men up the sloped, sandy walls in an unsuccessful attempt to take the fort. Almost half were killed, wounded, or captured. Colonel Shaw died and was buried in a common grave alongside 74 of his men.

In spite of the costly defeat, the battle was hailed as a victory, a demonstration of black soldiers' skill and courage. As General Colin Powell said in 1997, the fighting "served as a gleaming example of their courage and their fortitude. It was a tremendous moral victory. Black troops had proved every bit the equal of their white brothers."

Not, unfortunately, in the eyes of the War Department. A member of the 54th wrote home: "When we enlisted we were to get $13 per month, clothing and rations, and treatment the same as white soldiers; and now they want to cheat us out of what is justly due us, but paying us off with $10 per month, and taking three dollars out of that for clothing." Why, he asked bitterly, "are we not worth as much as white soldiers?"

Corporal James Henry Gooding wrote to Lincoln: "Your Excellency, We have done a Soldier's Duty. Why," he asked, "can't we have a Soldier's pay?"

The men of the 54th decided if they could not receive equal pay, they would accept no pay. Leading abolitionists, the governors of Vermont and Massachusetts, and the black soldiers themselves appealed to the Attorney General, the Secretary of War, and the President. Corporal James Henry Gooding wrote to Lincoln: "Your Excellency, We have done a Soldier's Duty. Why," he asked, "can't we have a Soldier's pay?"

For 18 months the men waited for justice, fighting without being paid. Morale in the black regiments plummeted; soldiers received heartbreaking letters from their impoverished families. Finally, in July 1864, Congress acted to give African American soldiers what they had been promised in the first place: $13 a month, retroactive to the date of their enlistment.

The regiment's survivors received their discharge papers on September 1, 1865. Almost immediately the black community in Boston launched a drive to erect a memorial to the 54th. It would be more than 30 years before the memorial was completed. The result of 12 years work by the great American sculptor Augustus Saint-Gaudens, it was the first monument in the country that included African American soldiers in full uniform. It was unveiled on Memorial Day 1897.

The names of the five white officers killed in battle were inscribed on the back of the monument. It was only in 1981 that the names of the black soldiers killed in action were added. The bronze relief sculpture has stood across from the State House for more than a century, an eloquent memorial to the 178,955 black men who fought in the Union Army.

On this day in 2002, a statue was installed in Florence, a village of Northampton, to honor Sojourner Truth, the former enslaved woman best known for the "Ain't I a Woman" speech she delivered in 1851....