Letter from Rev. Frederick B. Noss of Andover, MA to his brother George describing his experience during the Hurricane of 1938.

Once again to the strains of this detestable typewriter I am attempting to get off a letter to you, and there have been episodes of what to me were epic experiences to narrate. . . .

As you probably read in the papers, between the big doings of the dictators, we had a tremendous blow in these parts. From a weather station in the Blue Hills twenty-five miles due south of here gusts of 185 miles an hour were reported that afternoon in late September. I was out calling when the wind struck, almost without warning. I had gone out on a gusty fall afternoon, there were rain clouds and some falling moisture, but nothing unusual. Suddenly, with a bellow, the hurricane arrived, wrapping the branches of a big maple around its straining trunk, shaking the house and filling the air with flying shingles. I grabbed my hat and departed at top speed for home, half a mile away. Twice I had to turn the car around and seek another street.

Some trees came up by the roots, being gently laid away to their last rest as a mother lays down her children at night; others snapped off at the base with splintering crashes and great violence like soldiers going down in a rain of shells. The ruination of branches occurred right and left as the stoutest oaks and butternuts bent to the ground in the fiercest gusts. At home our veterans on the bank above the house were putting up a magnificent fight. All their leaves were still green, affording a terrible purchase, and the roar of the battle sounded like the deepest notes of a gigantic organ. How that old wind gathered up its full strength and hurled itself upon them, time after time, tearing away a heavy branch here and there, storming in through the openings and grappling with the trunk itself. . . .

I gathered all the children on the front lawn and for half an hour we stood in Muir-like admiration of the elements. I can assure you without reservation that although the strength and fury of the storm was beyond anything in my experience, that there was not the slightest taint of evil anywhere. I could have sworn that the sound trees enjoyed their struggle and I could swear now that they will be all the better for Nature is ever kind at heart, though sometimes a bit boisterous. The woods can stand a storm far better than any woodsman's axe, however wisely used. And the forests of New England had a thorough overhauling that night, I can assure you too. Nothing unworthy remained to cumber the ground with sick and rotten trunk.

I was two days short of my eleventh birthday that afternoon in Brockton when I went out to help my piano teacher shut her garage doors. I hung on desperately when the door detached and carried me across the back yard. Simultaneously thrilled and terrified, I was only slightly scratched and bruised by my rough landing. I shall never forget that I once flew in the arms of a hurricane. .
Riding the wind

Wow, JeannieBeane what an exciting memory to have.
Fallen trees

An interesting fact which I learned at the Harvard Forest in Petersham is that since there were far more fallen trees than could be used up immediately for lumber or firewood, many of them were "stored" in ponds and lakes to reduce rot and insect damage...until WWII came along and all the wood was then needed, Dwight
Login

On this day in 1938, a hurricane of astonishing force ravaged New England. Having gone to bed the night before to radio forecasts of scattered rain and fresh southerly winds, New Englanders woke on the 21st and went about their weekday routines. At least they did until the storm broke in mid-afternoon. Within minutes, the hurricane leveled virtually everything in its path. The whirling, shrieking winds and rushing waters took more than 600 lives and caused damage estimated between $6-12 billion in today's dollars. Technology now provides enough warning to evacuate vulnerable areas, so a storm of similar magnitude might take fewer lives today. But the pace of development along the coast means that property and environmental damage would undoubtedly be many times greater. 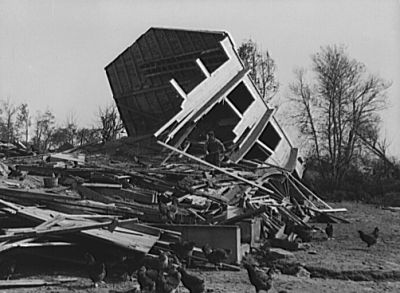 In Mayan mythology, Hurakan was the god of wind and storm, who unleashed deadly floods to show his anger towards humans. New Englanders who experienced the "September Surprise" of 1938 may never have heard of Hurakan, but they would have understood immediately how such storms came to be named after this fearsome Caribbean god.

In early September 1938, meteorologists noted a dangerous storm forming off the west coast of Africa. The powerful oceanic cyclone caught the attention of ship captains, who alerted the United States Weather Bureau that a monster storm was on its way. As the hurricane approached the southeastern coast of the U.S., Florida residents battened down the hatches, stocked up on supplies, and hoped for the best.

On September 20th, newspapers reported that the hurricane had gone out to sea. Without weather satellites, radar devices, or offshore weather buoys to track the storm as it turned into the Atlantic, forecasters could only rely on precedent. Past storms that had followed the path this one was on had dissipated somewhere out at sea. There was no reason to think this one would be different. As the storm skirted Florida, everyone heaved a sigh of relief.

Without weather satellites, radar devices, or offshore weather buoys to track the storm as it turned into the Atlantic, forecasters could only rely on precedent.

In New England, people turned their attention to Europe, where Adolf Hitler was poised to invade Czechoslovakia. Wet weather earlier in the month had pushed rivers to capacity, and people simply hoped for a day without rain. Most went about their business, while from Long Island to Maine, fishermen cast wary, experienced eyes at an ominous sky.

The hurricane made landfall on Long Island at 12:30 pm. Residents watched in horror as a 30-foot-high bank of what looked like fog rolled towards the shore. The "fog" was actually the storm surge, as meteorologists call the mountain of water that accompanies strong winds and low pressure near the center of the storm. On top of the surge, waves towered as much as 30 to 50 feet high, adding even more destructive force. As the storm hit, entire communities were swept away in a matter of moments. Hundreds of people died and thousands were left homeless as the storm moved north.

By mid-afternoon, it had devastated both the Connecticut River Valley and the Massachusetts coast. At 3:30 pm, the storm struck the Cape with brutal force. At the Blue Hill Observatory in Milton, just south of Boston, winds reached 121 mph, with gusts nearing 200 mph, still the second highest winds ever recorded in the Bay State.

"Ancient church spires toppled, signboards hurtled through the air, century-old shade trees found no grip in the miry soil for their straining roots."

Boston and the northern tier of Massachusetts were spared the worst of the storm. Some of the most severe damage occurred around Buzzards Bay. Two-thirds of all the boats in New Bedford harbor sank. In Onset and Wareham, wind and waves flattened entire rows of buildings, swept away roads, and overturned automobiles.

Inland, it was flooding that caused the most destruction. One writer with the Works Progress Administration chronicled the effects of the storm in western Massachusetts. "Ancient church spires toppled, signboards hurtled through the air, century-old shade trees found no grip in the miry soil for their straining roots. The gale hurled rivers against bridges, dykes, dams broke, crashing waves into cities and towns. Wind and water were lords of the Connecticut Valley." Farmers watched helplessly as their crops disappeared. In Hadley, the wind flattened six of every ten tobacco barns. Tons of apples and peaches lay on the ground. The season's harvest was ruined.

In many towns, the storm destroyed beautiful tree canopies, per­­manently changing the landscape. "There were towering elm trees that branched out right over the road," recalled one man. "The wind took out 70 percent of them ­­— ­­­­­­dropped them right in the road." Overall, the storm felled 275,000,000 trees.

One survivor reflected on its meaning for those who lived through it. "I sometimes feel that we have had a preview of the end of the world. For some, it was the end. It might easily have been [for us]. We experienced every sensation except that of actually leaving this world. . . ."

This Mass Moment occurred in the Southeast and Western regions of Massachusetts.

"The Long Island Express: The Great Hurricane of 1938"