Dick had gained something more valuable than money. He had studied regularly every evening, and his improvement had been marvelous. He could now read well, write a fair hand, and had studied arithmetic as far as Interest. Besides this he had obtained some knowledge of grammar and geography. If some of my boy readers, who have been studying for years, and got no farther than this, should think it incredible that Dick, in less than a year, and studying evenings only, should have accomplished it, they must remember that our hero was very much in earnest in his desire to improve. He knew that, in order to grow up respectable, he must be well advanced, and he was willing to work. But then the reader must not forget that Dick was naturally a smart boy. His street education had sharpened his faculties, and taught him to rely upon himself. He knew that it would take him a long time to reach the goal which he had set before him, and he had patience to keep on trying. He knew that he had only himself to depend upon, and he determined to make the most of himself—a resolution which is the secret of success in nine cases out of ten.

> in his final illness, he returned to Revere to be nursed by > his sister. What happened to Natick, where he later lived, died and is buried? Search on "Horatio Alger" and "Natick".
Horatio Alger's later years

You are correct. He returned to Massachusetts to live with his sister until his death in 1899, but she lived at that point in Natick, not Revere. Thank you for your careful reading; we have corrected the essay.
Horatio Alger's later years

And, in today's Mass Moment, you have corrected it very well! Horatio Alger is buried in the Glenwood Cemetery in South Natick, MA (far side, center, from the entrance). "Ragged Dick", Alger's first book, is online for the reading at various sites, including: http://www.pagebypagebooks.com/Horatio_Alger/Ragged_Dick/
"A serious omission"

A reader wrote in to point out a serious omission in today's essay: "Alger was the minister of the Unitarian church in Brewster on the Cape. He was several times caught sexually abusing young boys and was defrocked. He then went to NYC and devoted his time to being among young boys with little or no family protection. Considering what we have learned about the prevalence of sexual abuse by those who should be above suspicion, this is a painful omission." We did not include these events in the essay simply because the research materials we used did not refer to them. We would certainly be remiss not to include them in the discussion forum. Please feel free to add your comments!
"A serious omission"

The Unitarian Universalist Association confirms the allegations of pedophilia against Horatio Alger during his tenure as pastor of the church in Brewster. We have amended our essay to include this important part of his story. Our thanks, as always, to our informed readers for their feedback.
"A serious omission"

I would like to reiterate what I wrote a year ago. Oliver Optic was also a very popular writer and was at one time as well known as Alger. Remember July 30, 1822.
Oliver Optic

I hope you will have a Mass Moment about Oliver Optic. He was born on July 30, 1822 in Medway, MA. He was a very well known author of children's books and storied.
birth date

On this day in 1832, Horatio Alger was born in Revere. The author of the rags-to-riches stories that captured the imagination of generations of American boys, Alger was always more interested in literature than in the ministry, the profession his father had chosen for him. He attended college and divinity school, but left the ministry after only a few years to pursue a writing career following accusations of sexual misconduct. At age 30, he moved to New York and began writing stories about boys living by their wits on the city streets. In Alger's tales, the impoverished but virtuous hero is befriended by a wealthy gentleman who helps establish him in business. Over the next 35 years, Horatio Alger wrote more than 70 stories, all with this same basic plot. His name has become synonymous with the rise from "rags to riches" despite the fact that Alger himself struggled financially during his lifetime.

Unlike the heroes he created, Alger had little success in business; he struggled financially in spite of how well his books sold. 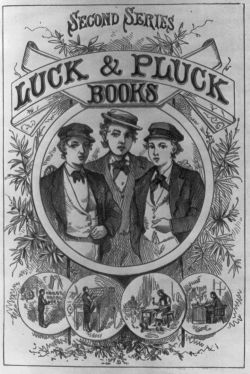 Horatio Alger made his name as the nation's leading writer of "rags to riches" tales. In over 70 stories published during his lifetime, he taught American boys growing up after the Civil War that virtuous behavior would be rewarded by respect and prosperity. His heroes did not rise to positions of great power and wealth in the manner of a Rockefeller or a Carnegie. They earned respectability and financial security by working hard, using their wits, and treating others with kindness.

Horatio Alger was born and raised in Revere, Massachusetts, a farming village just north of Boston that was then called North Chelsea. His father, a Unitarian minister, insisted that the boy study classics at an early age and follow him into the ministry. Horatio was small and timid — taunting classmates nicknamed him "Holy Horatio"— but he was also very bright. He entered Harvard in 1848 and excelled as a student. To his father's dismay, he was more interested in literature than theology. When he read the recently published Moby-Dick, he was inspired to imagine that he, too, might become an author. He began writing and succeeded in publishing several novels in the years after college.

Rev. Alger did not give up his plan for his eldest son to become a minister. Horatio reluctantly attended Harvard Divinity School. He was ordained and installed as minister of the Unitarian Church in the Cape Cod village of Brewster in December of 1864.

To his father's dismay, he was more interested in literature than theology.

Alger's tenure in Brewster was short. In early 1866, rumors surfaced that the young clergyman was molesting boys. Two youths came forward with tales of seaside picnics where Alger had "practiced on them." Confronted by the boys' parents and church authorities, Alger did not deny the allegations. He resigned his pulpit and returned to live with his parents, who, by then, had moved to Natick. After receiving assurances that Horatio Alger would leave the ministry, church officials and the boys' parents agreed not to file charges.

With the scandal suppressed, Alger moved to New York City. In the late 1860s and 1870s New York was teeming with poor, homeless, and orphaned youngsters. Horatio Alger was moved by their plight. The first story he published in New York, Ragged Dick, portrayed the struggles of a homeless young bootblack to survive on the streets. Dick's intelligence and spirit attract the attention of a generous man of means. With the help of his benefactor, Dick becomes a respected and successful businessman.

When a popular boys' magazine published Ragged Dick in installments, it attracted wide attention. One man who sought the author out was Charles O'Connor, the superintendent of the Newsboys' Lodging House. Over the next 30 years, O'Connor would give Alger a home, unwavering friendship, and, when times were hard, financial support. Alger served as chaplain for the Newsboys' Lodge and helped to support the institution with income from his books.

The first story he published in New York, Ragged Dick, portrayed the struggles of a homeless young bootblack to survive on the streets.

Alger gave aid and assistance to many poor boys in New York. When he had the money, he helped a number of them work their way out of poverty, just as the benefactors in his stories did. Alger's involvement with poor children gave him material for his stories, which he produced at a rapid and steady pace.

His tales all had the same basic plot. A fatherless boy from a New England village runs away to the city after escaping from a greedy and abusive man, who occupies a position of power in the community. The boy's kindness and bravery are noticed by a wealthy, single or widowed man. The gentleman either bestows a modest fortune on the boy or helps to establish him in business. Success achieved, the hero returns to his village and rescues his poor widowed mother.

At the time they were written, and for many years afterwards, Alger's stories were seen as realistic descriptions of how the poorest boy could make good in America. All he needed to do was work hard and avoid idleness, alcohol, and undesirable company and he could achieve respectability and security. Boys loved the books, and parents approved of the message they conveyed. Horatio Alger's stories were so well loved that for nearly 40 years boys collected his books and swapped them like trading cards. He received letters from thousands of boys, seeking his advice.

Horatio Alger's stories were so well loved that for nearly 40 years boys collected his books and swapped them like trading cards.

Critics have pointed out that Alger's heroes were not truly self-made men, since they usually benefited from the generosity of a stranger-benefactor. Alger's tales may be better understood as a reflection of his desire to find a substitute for his own domineering father. In many ways, Horatio Alger never really grew up. He remained dependent on his friend Charles O'Connor until, in his final illness, he returned to Massachusetts to be nursed by his sister. He died in Natick in 1899.

Unlike the heroes he created, Alger had little success in business; he struggled financially in spite of how well his books sold. His inner and personal life remains shrouded in mystery due to the fact that he instructed his sister to destroy his diaries and personal papers after his death, a request that she honored. An early biography of Alger was later revealed to be a hoax; it has only been in recent years that scholars have uncovered some of the details of his life.

Most Americans in the twenty-first century have never read a Horatio Alger story, but know his name and associate it with the American Dream of "pulling oneself up by his or her bootstraps." Alger may not have lived the life of his heroes, but he created a myth that has endured for more than a century.

On this day in 1896, 45,000 people gathered in Revere to celebrate the opening of the first public beach in the nation. In 1895 the newly-created Metropolitan Parks Commission had taken ownership of the longest...