Volley Ball is a new game which is pre-eminently fitted for the gymnasium or the exercise hall, but which may also be played out-of-doors. Any number of persons may play the game. The play consists of keeping a ball in motion over a high net, from one side to the other, thus partaking of the character of two games — tennis and hand ball.

Play is started by a player on one side serving the ball over the net into the opponents' field or court. The opponents then, without allowing the ball to strike the floor, return it, and it is in this way kept going back and forth until one side fails to return it or it hits the floor. This counts a "score" for one side, or a "server out" for the other, depending on the side in point. The game consists of nine innings, each side serving a certain number of times, as per the rules, per inning.

On this day in 1987, the Volleyball Hall of Fame opened to the public in Holyoke. The Hall of Fame was born out of the work of an ad hoc committee established by the Greater Holyoke Chamber of Commerce in 1971, which incorporated as a non-profit in 1978. Opening festivities included a two-day volleyball tournament, the induction of William G. Morgan into the Hall, and a keynote presentation by Douglas Beal, coach of the 1984 U.S. Men's Gold Medal Olympic Volleyball Team. The Hall of Fame inducted its first international athletes in 1998 and has since promoted the worldwide popularity of the sport. 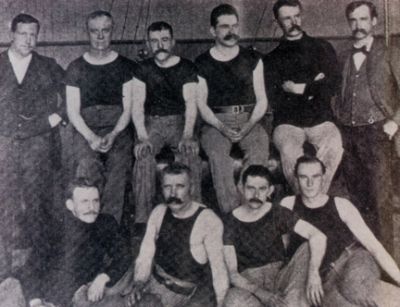 In the winter of 1895, William G. Morgan, the physical education director at the YMCA in Holyoke, had a problem. Basketball, invented just four years earlier at the Y in nearby Springfield, was spreading like wildfire. But Morgan worried that the new game was too strenuous for the sedentary middle-aged businessmen who frequented the Holyoke Y.

In keeping with the YMCA's mission to develop "spirit, mind, and body," Morgan wanted an indoor activity that would provide a healthy workout but without the rough physical contact of basketball. He began to experiment. He drew on various racket sports and on a popular German game called "Faustball." By winter's end, he had come up with volleyball.

Morgan called the original version of his game "Mintonette." The first set of rules called for a 6'6" net — half a foot taller than the average man — in the center of a 25' by 50' indoor court. There was no set number for the size of the teams. There were nine innings in a match, with each team serving three times in each inning; there was no limit to the number of times a team could hit the ball before sending it over the net.

When Morgan took a demonstration team to the YMCA in Springfield in 1896, a spectator remarked that the players seemed to be volleying the ball. He suggested that "volleyball" would be a good name for the new sport, and Morgan agreed.

By the end of the war, the game had traveled with the army to France, Italy, and Egypt.

Over the next few years, the game gained popularity at Y's around the country. The net was raised and other rules were modified to increase the physical challenge; in 1900, the rules of the sport gained official approval and were published by the YMCA.

In the first two decades of the twentieth century, the game of volleyball spread around the world. The Y ran athletic centers all over the world, and it also provided sports personnel and equipment for the U.S. Army. So it was that Cubans discovered the game in 1906 when the U.S. invaded the island.

Volleyball first reached Asia in 1908 when a Springfield College graduate demonstrated the game at the YMCA in Tokyo. In 1910, two representatives of the Y brought the game to China, and the YMCA director in Manila introduced it to the Philippines.

By 1912, the game was being played so widely that the 1900 rules needed to be revised. The court was re-sized, the size and weight of the ball were made uniform, the number of players was standardized, and rotation of servers was introduced.

". . . everywhere, from the South Pacific to the Finnish front, volleyball drew crowds among troops engaged in the Second World War."

Volleyball received an unexpected boost with the outbreak of WWI. The YMCA established a War Office, which decided to include volleyball in the recreation and education program for American armed forces at home and abroad. Thousands of balls, nets, and rulebooks were distributed to U.S. troops. By the end of the war, the game had traveled with the army to France, Italy, and Egypt. It was especially well received in Eastern European countries where long, harsh winters made indoor sports attractive.

Russians discovered volleyball in the early 1920s when the game was played at YMCAs in the new Soviet Union. Within a few years, Russians had claimed the sport as their own. In 1927, Soviet officials ejected the YMCA as a "capitalistic, bourgeois, and religious" organization (which it avowedly was), but volleyball stayed. The sport became so popular in the Soviet Union that within a decade over 400,000 people played the game. The USSR held the world's first national volleyball championship. One match was played on the stage of the Bolshoi Theater.

World War II continued the global spread of volleyball. The Federation Internationale de Volleyball (FIVB) records that "everywhere, from the South Pacific to the Finnish front, volleyball drew crowds among troops engaged in the Second World War." The sport was especially well-adapted to the limited space on aircraft carriers.

In the 1920s and 1930s, women began to play the game. Russia won the first world championship for women held in Moscow in 1952. The rapid growth of California's population after WWII created another venue for and variant of the game — beach volleyball, which received official status in 1986.

William Morgan, the Holyoke inventor of the game, died in 1942 at the age of 68. Had he lived a few more years, he would have witnessed the creation of an international volleyball federation, headquartered in Paris.

In 1964, the International Olympic Committee recognized volleyball as an official Olympic sport. While never as popular in the United States as basketball, western Massachusetts' other contribution to sports history, volleyball was played all over the world. At the 1964 Olympics in Tokyo, the first gold medals for the sport were claimed by the Russian men and the Japanese women.

The Volleyball Hall of Fame is located in Holyoke.

Young Men's Christian Association, "Olympic Sport of Volleyball was Born at the YMCA."