In New Bedford, fathers, they say, give whales for dowers to their daughters, and portion off their nieces with a few porpoises a-piece. You must go to New Bedford to see a brilliant wedding; for, they say, they have reservoirs of oil in every house, and every night recklessly burn their lengths in spermaceti candles.

In summer time, the town is sweet to see; full of fine maples-–long avenues of green and gold. And in August, high in air, the beautiful and bountiful horse-chestnuts, candelabra-wise, proffer the passer-by their tapering upright cones of congregated blossoms. So omnipotent is art; which in many a district of New Bedford has superinduced bright terraces of flowers upon the barren refuse rocks thrown aside at creation's final day.

And the women of New Bedford, they bloom like their own red roses. But roses only bloom in summer; whereas the fine carnation of their cheeks is perennial as sunlight in the seventh heavens.

What a great site! I'm really enjoying these little snippets of history. I had no idea Melville's book was based on actual (if fantastical-- who knows, right?) accounts of a real whale. Makes me want to look for those accounts. Does anyone know if there are manuscripts/diaries available for perusal? I also didn't know that the book was originally a flop. Who actually "rediscovered" & marketed it? Who decided it was a classic so many years after it had been discarded? --Jenny-J-J
Mocha Dick

To find out more about Herman and his works I would strongly recommend visiting the Berkshire Athenaeum (othewise known as the Pittsfield Library), where there is a whole room dedicated to him. If you're hardcore, be prepared to spend a day, or more, because you'll also want to visit his nearby former home Arrowhead. Check out the web links on the cover story.
Mocha Dick

I, too, derive pleasure from your website. The Melville piece was particularly interesting and I will plan on further investigating his story in Pittsfield.
Mocha Dick

Jenney J J, you may find this snippet of white whale history intersting: A true life story concerning Massachusetts men and the taking of a real white whale happened in 1902. A Wampanoag harpooner named Amos Smalley, who hailed from Martha's Vinyard, harpooned and killed a white whale off the Azores. It should be noted the technology of that day produced a harpoon equiped with an explosive device; thus,making it somewhat easier to subdue any whale. Interestingly, descendants of Mr. Smalley are still living on Martha's Vinyard.
Mocha Dick

Hi there... I am a Wampanoag from Aquinnah, Massachusetts living North of Boston and Amos Smalley, the man who helped kill the great white whale is my mom's great uncle. (Also, my mom's grandmother wrote the famous Wampanoag legend of Moshup.) All the best,
Mocha Dick

We visited Melville's home in the Berkshires. When he lived there, the farming fields of waving grain undoubtedly reminded him of his beloved sea. The Melville women were of strong character. When Melville felt down, he took to the sea leaving household and family management to his wife. ------------------------- nancy strouse
The real white whale.

A true life story concerning Massachusetts men and the taking of a real white whale happened in 1902. A Wampanoag harpooner named Amos Smalley, who hailed from Martha's Vinyard, harpooned and killed a white whale off the Azores. It should be noted the technology of that day produced a harpoon equiped with an explosive device; thus,making it somewhat easier to subdue any whale. Interestingly, descendants of Mr. Smalley are still living on Martha's Vinyard.
Login

On this day in 1841, Herman Melville boarded the whaleship Acushnet and sailed out of New Bedford, the whaling capital of the world. As he later wrote about his character Ishmael, that ship would be "my Yale College and my Harvard." After five years at sea, Melville returned to Boston and began writing novels about his adventures. He published five books in five years—all of them commercially successful sea tales. In 1850, he moved to a farm in the Berkshires. There he wrote Moby-Dick. A critical and commercial failure, the book marked the end of Melville's career as a successful novelist. Moby-Dick was not rediscovered until the 1920s. It has been considered one of the single greatest American novels ever since.

Moby Dick was a resounding failure when it was published in the 1850's. 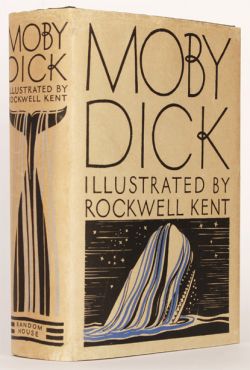 In January of 1841, a young Herman Melville boarded the whaleship Acushnet, and left the port of New Bedford bound for the distant Pacific Ocean. At 21, Melville was beginning a voyage that he would later draw on for several novels of seafaring life, including the American classic, Moby-Dick.

Melville was born to a prosperous family in New York City. When he was still a boy, his father's importing business went bankrupt. A distraught Alan Melville committed suicide, leaving his wife to care for eight children. She moved the family to Albany, and from the age of 13, Herman Melville helped to supplement the struggling family's income. At 20, he decided to make his living at sea and signed on as a cabin boy on a merchant ship bound for Liverpool.

Melville fell in love with the sea. When he returned to the United States, he tried teaching school, but it could not compare with the arduous adventure of seafaring life. Whaling was nearing its peak, and crews were needed for the dozens of ships headed from Massachusetts ports to the Pacific whaling grounds. On December 30, 1840, the 21-year-old Melville signed on to the crew of the whaleship Acushnet. He would spend 18 months on the Acushnet, learning to be a whaler. As he later wrote about his character, Ishmael, "... a whale ship was my Yale College and my Harvard." Melville took part in the hunting and killing of whales, in harvesting and processing whale oil aboard ship. He endured gales and calm, experienced excitement and boredom, followed ship's discipline, all the while absorbing the lore of the veteran seamen who made up the Acushnet's diverse and colorful crew. 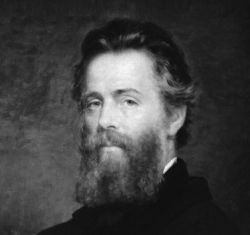 Among the many stories Melville heard from his fellow sailors were tales of Mocha Dick, the infamous huge white whale known to attack whale boats and take sailors to their death. In May of 1839, the popular Knickerbocker Magazine described "this renowned monster, who had come off victorious in a hundred fights with his pursuers, [as] an old bull whale, of prodigious size and strength. From the effect of age, or more probably from a freak of nature, ... he was white as wool! ... Numerous boats are known to have been shattered by his immense flukes, or ground to pieces in the crush of his powerful jaws." According to this account, the huge whale was unconquered but not invulnerable. His back was serried with irons, and he trailed from 50 to 100 yards of line in his wake. "His name seemed naturally to mingle with the salutations which whalemen were in the habit of exchanging, in their encounters upon the broad Pacific; the customary interrogatories almost always closing with, 'Any news from Mocha Dick?'"

The power of these stories was underscored for the young Melville by a chance meeting he had with a sailor named William Henry Chase. Chase's ship and the Acushnet exchanged visits while at sea. Chase's father Owen had survived the sinking of the Essex by a great whale in the South Seas in 1820. Reading Owen Chase's account of the ordeal, Melville later wrote, while "on the landless sea, and so close to the very latitude of the shipwreck, had a surprising effect upon me."

"No! in thunder” -- Herman Melville, quoting his friend Nathaniel Hawthorne

While Melville was gathering adventures and stories, his ship was not having much success hunting whales. After 15 months, Melville and a friend deserted the ship when it stopped in Polynesia. They lived among the native Typee people for several weeks before Melville joined another whaler. The crew of this ship mutinied, and Melville spent time in a Polynesian jail. After several more years at sea, Melville returned to Boston, married, and settled down to write about his adventures.

Melville's early books were popular hits, especially Typee, which was set on the exotic and cannibalistic islands of the South Seas. After publishing five novels in as many years, Melville moved to the Berkshires in 1850. There he struck up a friendship with Nathaniel Hawthorne, who was living nearby. Melville was 15 years younger than Hawthorne and considerably more successful. But Melville admired his fellow author greatly. Soon after he wrote in a letter that Hawthorne, “says No! in thunder,” describing a social-critical stance that exerted an enormous influence on Melville's work and was the catalyst for Melville's decision to turn his story of the great whale from a rollicking adventure tale into a complex narrative that many critics consider the greatest American novel ever written. 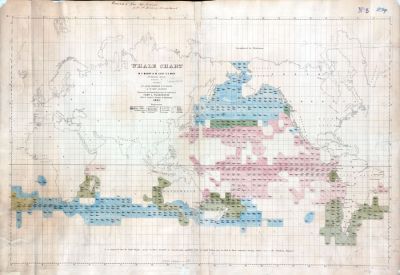 Published in 1851 and dedicated to Nathaniel Hawthorne, Moby-Dick was a critical and commercial failure. For several years, Melville continued to earn a living lecturing about his adventures in the South Seas. He published five more books but none of them sold well. His reputation faded. He moved to New York and got a job with the Customs Revenue service. When he died in 1892, he hadn't written a book in 25 years. The New York Times was the only paper to carry an obituary. It said simply that "he was the author of Typee, Omoo, Mobie Dick, and other sea-faring tales, written in earlier years."

The Berkshire Athenaeum in Pittsfield maintains a Melville Memorial Room.

The New Bedford Whaling Museum is in the National Historic Whaling Park.

This Mass Moment occurred in the Western and Southeast regions of Massachusetts.

Bestselling author Nathaniel Philbrick made the case for reading this classic work in Why Read Moby Dick? (New York: Viking, 2011)

Melville: A Biography by Laurie Robertson-Lorant (University of Massachusetts Press, 1996).

On this day in 1975 charter boat captain Al Avellar left Provincetown Harbor with a boatload of school children. They were going to look, not fish. This was the first whale-watching trip on the eastern...

Tip O'Neill Elected Speaker of the House of Representatives