I have had made forty two exceedingly strong sleds & have provided eighty yoke of oxen to drag them as far as Springfield where I shall get fresh cattle to carry them to camp - the rout will be from here to Kinderhook from whence into Great Barrington Massachusetts Bay & down to Springfield.

There will scarcely be any possibility of carrying them from here to Albany or Kinderhook but on sleds the roads being very gullied - at present the sledding is tolerable to Saratoga about 26 miles; beyond that there is none - I have sent for sleds & teams to come here & expect to begin move them to Saratoga on Wednesday or Thursday next trusting that between this & then we shall have a fine fall of snow which will enable us to proceed further & make the carriage easy - If that should be the case I hope in 16 or 17 days to be able to present your Excellency a noble train of artillery the inventory of which I have inclosed.

From Henry Knox at Albany to George Washington, January 5, 1776

I did myself the honor to address your Excellncy from Fort George on the 17 Ult. – I then was in hopes that we should [have] been able to have had the Cannon at Cambridge [by] this [time] the want of Snow detain'd us some days & now a cruel thaw, hinders from Crossing Hudsons River which we are oblig'd to do four times from Lake George to this Town – the first severe night will make the Ice on the river sufficiently strong, 'till that happens the Cannon & mortars must remain where they are most of them at the different crossing places & some few here – these inevitable delays [pain] Me [exceedingly] as my mind is fully sensible of the importance of the greatest expedition in this Case – In eight or nine days after the first severe frost they will be at Springfield from which place we can get them easily transported Altho there should be no snow – but to that the roads are so excessively bad Snow will be necessary – We got over 4 more…fortified 12 pounders after my last to your excellency – I send a duplicate of the List for fear of miscarriage of the other [List], General Schuyler has been exceedingly assidious In this matter, as to myself my utmost endevers have been & still shall be use[d] to forward them with the utmost dispatch.

I have the honor to be

with the greatest Respect Your

British forces did not retreat to Canada from Ticonderoga in 1775. The fort's small garrison surrendered and became prisoners. Henry Knox did not fight at Bunker Hill, though he was already serving as a volunteer aide to General Ward.
details, details

Yes, but transporting those fieldpieces from New York to Framingham was a masterstroke of logistics (and manpower). I've hiked through there. Tough country. ------------------------- Ghostrider
astounding

We drove back from VT. last weekend on Rt. 2, and I once again told my family about this truly incredible feat. Rt. 2 ain't the greatest road under any circumstances, but can you imagine what it must have been like when it was just the Mohawk Trail, and their oxen & sleds had 2 drag those cannon so far. Fair to say that if they'd failed, the Revolution would have come to a short and not too sweet end! (Moral of this story: don't underestimate booksellers..!). ------------------------- W. David Stephenson | Principal | Stephenson Strategies D.Stephenson@stephensonstrategies.com 335 Main St., Medfield, MA 02052 | (508) 359-5112 *author: "a web strategy for better state government" in Massachusetts
astounding

Or they don't make booksellers like they used to. Or the general population for that matter. Can anyone conceive of an "army" of citizen soldiers today doing anything like what those people did? Let's face it, most of the educated classes today would be loyalists, Thomas Hutchinsons writ large and small. But, hey, we are what we are.
astounding

But on further consideration, citizens using their contemporary means of hauling, earth-moving and freight-moving stock, could and probably would accomplish some equivalent feat. The closest thing I can think of in our society are citizens who band together to build levees. However, I should not imply that the cannon were moved by people donating their time, as I'm sure many bills were submitted for work provided. When and if they got paid and in what currency is another question, one which Daniel Shays and his men were still fighting about, years later.
The enslaved soldiers

What do we know about the aforementioned Cuff?
The enslaved soldiers

Author and editor, Anita Silvey, wrote a wonderful picture book biography of Henry Knox, published in 2010. The title is Henry Knox: Bookseller, Soldier, Patriot. It's a great read and a visual treat for children and adults.
Login

On this day in 1776, Colonel Henry Knox reached the headquarters of the Continental Army in Cambridge. The young Boston bookseller had pulled off a daring plan. He had led a small group of men on a 300-mile journey from Boston to Fort Ticonderoga in New York State. Once there, the party disassembled cannon taken when the British surrendered the fort and retreated to Canada in May 1775. In less than two months time, Knox and his men moved 60 tons of artillery across lakes and rivers, through ice and snow to Boston. On March 7th, 2,000 Continental soldiers maneuvered the guns to a hill overlooking the city. The British had no choice but to evacuate Boston.

In less than a week, the determined Knox had acquired the sleds he needed and loaded the cannon. 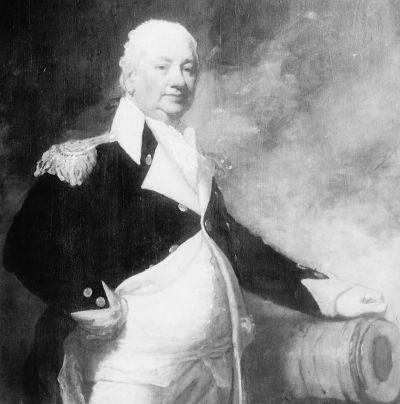 In the early winter of 1775, a young man approached General George Washington at his headquarters in Cambridge with a bold proposal.

Twenty-five-year-old Henry Knox had met the general shortly after the Battle of Bunker Hill, when Washington arrived to take charge of the colonial forces. Knox impressed Washington with his energy, ingenuity, determination, and knowledge of artillery. Now, as winter deepened, Washington faced a predicament. His ragtag troops had Boston under siege, and they occupied high ground from which they could shell the British. But the Americans needed big guns, and Henry Knox had an idea about where to get them.

In May 1775 when Ethan Allen's Green Mountain Boys forced the British to surrender Fort Ticonderoga, they had captured 59 pieces of artillery. Henry Knox proposed traveling 300 miles to Ticonderoga to bring the artillery back to Boston. With enough cannon positioned on Dorchester Heights, the Continental Army stood a good chance of dislodging the British from Boston and scoring a badly needed victory.

Many of Washington's advisors thought the plan was hopeless. The guns would have to be dismantled and loaded onto barges, transported down Lake George before the great 30-mile-long lake froze, then hauled the rest of the way by sledge and oxen over rough trails. Knox would need good luck and better weather — warm days for crossing the lake; cold, snowy nights for the sleds.

The Americans needed big guns, and Henry Knox had an idea about where to get them. 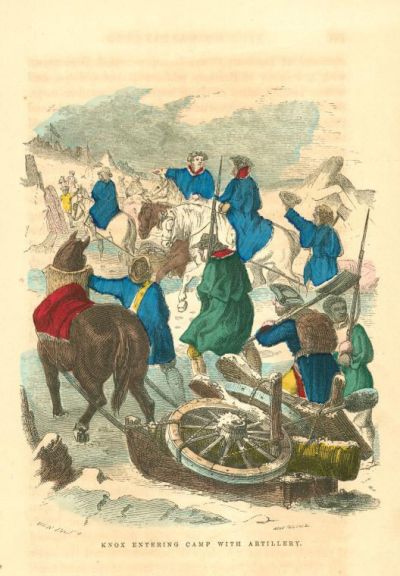 The operation involved mobilizing a large corps of men, assembling a flotilla of flat-bottomed boats for the lake trip, building 40 special sleds, and gathering 80 yoke of oxen to pull the 5400-pound sleds. Knox was persuasive; if the mission succeeded, the advantage gained would be spectacular. Washington agreed to the idea, and on December 1st, the Boston bookseller set off on horseback for Ticonderoga.

He arrived at Ticonderoga four days later. He immediately set about disassembling the guns — 43 heavy brass and iron cannon, six cohorns, eight mortars, and two howitzers. His men removed the guns from their mountings and transported them by boat and ox cart to the head of Lake George. By December 9th, all 59 guns were loaded onto flat-bottomed boats and headed down the lake.

Until that point, the weather had remained mild, but now the wind picked up and forced Knox's freezing men to row into an icy gale. With heroic effort, they succeeded in getting the last of the cannon to the southern end of the lake just as it began to freeze over.

The next challenge was to move the cannon overland. From Fort George on December 12th, Knox wrote asking a local farmer to "purchase or get made immediately 40 good strong sleds that will each be able to carry a long cannon clear from dragging on the ground and which will weigh 5400 pound each and likewise that you would procure oxen or horse as you shall judge most proper to drag them. . . . The sleds . . . are to go to camp near Boston."

"I hope in 16 or 17 days to be able to present your Excellency a noble train of artillery."

In less than a week, the determined Knox had acquired the sleds he needed and loaded the cannon. On December 17th, he wrote to Washington, "I have had made forty two exceedingly strong sleds & have provided eighty yoke of oxen to drag them as far as Springfield where I shall get fresh cattle to carry them to camp. . . . I hope in 16 or 17 days to be able to present your Excellency a noble train of artillery."

Knox was ready, but he could not move. The ground was bare. A good base of snow was needed for the oxen to drag the heavy sleds. Finally, on Christmas morning, Knox awakened to several feet of fresh snow. It was too much of a good thing, since it was difficult to cut a new path through such deep snow. Still, Knox and his men pushed on toward Boston.

By January 5th, the artillery had reached Albany, but once again, nature did not cooperate. The ice on the Hudson was not deep enough to support the weight of the sleds. During each of the first two attempts at crossing, Knox saw a precious cannon lost to the river. But by the evening of January 8th, he was able to write in his diary, "Went on the ice about 8 O'clock in the morning & proceeded so carefully that before night we got over 23 sleds & were so lucky as to get the Cannon out of the River, owing to the assistance the good people of the City of Albany gave."

Continuing eastward, Knox and his men crossed the border into Massachusetts and struggled on to Springfield. From here both the roads and the weather improved. With 80 yoke of fresh oxen, the expedition passed through Brookfield, Spencer, Leicester, Worcester, Shrewsbury, Northborough, Marlborough, Southborough, Framingham, Wayland, Weston, Waltham, and Watertown. On January 24, 1776, Knox's "noble train of artillery" entered Cambridge.

Six weeks later, on the night of March 4th, Washington's gun batteries in Cambridge distracted British troops while several thousand Americans quietly maneuvered the artillery up Dorchester Heights and frantically constructed emplacements. Logs painted to look like cannon made it seem as if they had even more firepower than they did.

The next morning an astonished British General Howe looked up at Dorchester Heights and remarked, "The rebels did more in one night than my whole army would have done in one month." Thanks largely to Henry Knox, the vaunted British Army had little chance of ending the siege of Boston. On March 17th, British troops and Tory sympathizers began the evacuation of Boston. 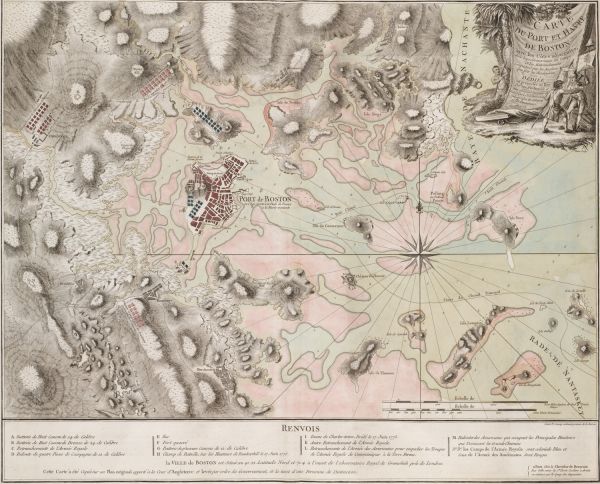 The Knox Trail features 56 monuments marking the journey from Fort Ticonderoga to Boston.

On this day in 1800, the man who commanded the ragtag American force that chased the British Regulars back to Boston following the battles of Lexington and Concord died at home in Shrewsbury. Trusted and...