She had the happy faculty of appreciating all that was worthy and lovable in others and was possessed of a temperament full of sunshine and carrying with it a sense of poetic values which made all life beautiful and full of meaning.

I am always glad to read about Henrietta Leavitt, and to help push Leavitt's Law as a name for the period-luminosity relation (valid for a type of star known as a Cepheid variable, after the first in its class, which is in the constellation Cepheus), in analogy to using Hubble's law as the name for the redshift-distance relation for distant galaxies. But I was disappointed to see the article posted, in massmoments.com (http://www.massmoments.org/moment.cfm?mid=358) making the same mistaken that I had just graded as wrong for several of my Astronomy 101 class's final exams: the post credits her with finding a "critical relationship between a variable star's brightness," while the relation is only valid for the very small (but important) subclass of variable stars known as "Cepheid variable stars." The post should have read "between Cepheid variable stars' brightnesses...." To emphasize the distinction, in my class and in my textbook (The Cosmos, Astronomy in the New Millennium; http://thecosmos4.com), I have started showing light curves of 10 variable stars, only two of which are Cepheids. Also, "which other astronomers used to estimate the location of star clusters in our galaxy" would better be: "which other astronomers used first to estimate the location of star clusters in our galaxy and then to find most of the known distances throughout the distant universe, making Leavitt's work at the basis of modern cosmology." ------------------------- JAY PASACHOFF Field Memorial Professor of Astronomy Williams College
Typo

"Oh, Be A Fine Girl ý Kiss Me["] (And you should either incorporate Jay Pasachoff's correction, or explain why you shouldn't.)
Login

On this day in 1921, Henrietta Leavitt, a scientist at the Harvard Observatory, was buried in Cambridge. Her premature death cut short a brilliant career as an astronomer. In the late nineteenth century, observatory director Edward Pickering wanted to map the brightness and color of the visible stars. He proposed a painstaking process of manually counting and computing the images revealed in thousands of photographs of starfields. Pickering knew he would need bright, meticulous, and dedicated people willing to work for low pay. So he hired women. These recent college graduates threw themselves into the work with enthusiasm. They discovered new stars and developed laws that provided a "cosmic yardstick" for measuring the universe, proving that women could be astronomers and scientists.

Today, nearly half of all astronomy graduate students in the United States are women. 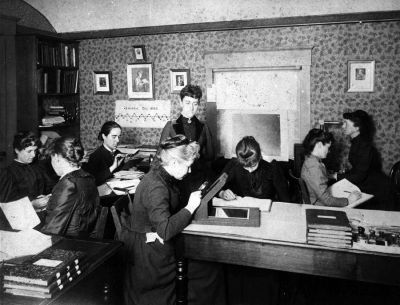 In the 1880s and 1890s, despite that fact that women's colleges were beginning to turn out graduates trained in the sciences, it was still rare to find women in the scientific professions. Edward Pickering, director of the Harvard Observatory from 1877 to 1919, broke with tradition out of necessity. He needed "computers" — human number crunchers — to do thousands of complex astronomical computations. There were few qualified men willing to do the job for what he was prepared to pay (25 cents an hour) so Pickering turned to women. In doing so, he created unprecedented opportunities for a generation of female astronomers.

Pickering's goal was ambitious. The telescope Harvard owned in Peru yielded glass plate photographs of the sky. These images made it possible to judge the color and brightness of stars more accurately than ever before. Pickering wanted to use the photographs to measure precisely the brightness (a clue to distance) and color (a clue to composition) of every star in the sky. Frustrated by the lack of good data, he resolved to complete the catalogue by poring over the glass plates, counting and calculating, for as long as it took.

But in the days before government and corporate funding of scientific research, money for this kind of undertaking was scarce. Pickering came up with a unusual solution. "A great savings may be effectuated by employing unskilled and therefore inexpensive labor, of course under careful supervision," he reasoned. He found his first prospect right in his own home.

He needed "computers" — human number crunchers — to do thousands of complex astronomical computations.

Williamina Fleming was an intelligent and educated Scottish woman. Abandoned by her husband, she supported her son by working as a maid in the Pickerings' Cambridge household. In 1881 Edward Pickering offered her a job at the observatory. Soon she was supervising other women workers. Fleming helped Pickering develop a system to classify the stars based on their spectra — the colors revealed when light is refracted through a prism. A monumental task that would occupy the "computers" for decades, it was published from 1918 to 1924 as the Henry Draper Catalogue, named for the man whose widow financed the work. The first large-scale attempt to catalogue spectral types of stars, the Draper Catalogue covers the entire sky down to about the ninth or tenth magnitude. In time, Fleming received the official title of Curator of Astronomical Photographs.

A small army of female "computers" worked under Pickering and Fleming. The cold, damp conditions of the observatory dome were considered unsuitable for women, so they spent their days in the observatory office poring over what were no more than specks in the photographs to generate the data Pickering needed. Not everyone was convinced that this was appropriate employment for a female, but a Boston Globe reporter conceded in 1893 that "these young women deal with difficult problems quite as successfully as do the men in other observatories." The article included a note of skepticism: "To be sure, not all women are capable of working in this field for the work demands special mental qualities."

"these young women deal with difficult problems quite as successfully as do the men in other observatories."

Henrietta Swan Leavitt had those special qualities in abundance. Born in the central Massachusetts town of Lancaster in 1868, Henrietta came from an old New England family that valued education. She attended public schools until her minister father moved the family to the Midwest. She spent two years at Oberlin College before returning to Massachusetts to earn her degree at Radcliffe in 1892. One of the last courses she took was in astronomy, and afterwards she volunteered to be one of Pickering's "computers." Illnesses and family concerns repeatedly interfered with her volunteer work at the observatory, but she was such a skilled "computer" that in 1902 Pickering put her on the payroll.

Leavitt was an excellent astronomer. She became an expert at identifying "variable stars" (those that glow more brightly and then more dimly at regular cycles) and identified over 2,400 of them in the course of her career. More importantly, she recognized that there was a critical relationship between a variable star's brightness and the length of its cycle. Leavitt published her findings, which other astronomers used to estimate the location of star clusters in our galaxy. A modest woman, Leavitt did not seek acclaim for her findings, but she was proud of her profession. When a census taker visited her Cambridge home and asked her occupation, Leavitt replied "I am an astronomer." Cancer brought an end to her path-breaking work in 1921. Henrietta Leavitt was 53 years old.

A modest woman, Leavitt did not seek acclaim for her findings, but she was proud of her profession. When a census taker visited her Cambridge home and asked her occupation, Leavitt replied "I am an astronomer."

Perhaps the best known of Pickering's "computers" was Annie Jump Cannon, who identified and classified more stars than any other astronomer in the world. She specialized in using spectra to classify stars, making major contributions to the Henry Draper Catalogue. Both her series of spectra classifications (O, B, A, F, G, K and M) and the mnemonic device she used ("Oh, Be A Fine Girl — Kiss Me) are still in use today. Cannon was named curator of the observatory's astronomical photographs in 1911. The honor was so rare for a woman that the letter appointing her an astronomer began "Dear Sir."

Fleming, Leavitt, Cannon, and the other "computers" made real contributions to the field of astronomy; they also helped open doors to women in science. As a recent biography notes, they "disproved the notion that a woman's intellect was inferior and that her health would be compromised by using it." Today, nearly half of all astronomy graduate students in the United States are women.

If Henrietta Leavitt's story inspires you to look to the heavens, the Harvard-Smithsonian Center for Astrophysics offers events open to the public.

WGBH: A Science Odyssey, “People and Discoveries: Henrietta Leavitt” Smithsonian Magazine: The Women Who Mapped the Universe and Still Couldn’t Get Any Respect

"Reaching for the Stars: A Century Ago, Women Astronomers At Harvard Made Scientific History," by Jennifer H. Powell, Harvard University Gazette, March 19, 1998.

Miss Leavitt's Stars: The Untold Story of the Woman Who Discovered How to Measure the Universe, by George Johnson (W.W. Norton & Company, 2005).