On this day in 1980, Jacqueline Kennedy Onassis and Ernest Hemingway's son Patrick dedicated the Hemingway Room at the recently opened John F. Kennedy Library and Museum in Boston. The Nobel-prize winning author and the 35th president never met, but they admired each other greatly. After their deaths, their widows agreed that the presidential library would be a fitting repository for Hemingway's collection. A special room was created to house not only his personal papers, memorabilia, photographs, and scrapbooks, but carved African statues and hunting trophies as well. The rest of the building is devoted to the memory of the slain president and "to all those who through the art of politics seek a new and better world."

. . . when the collection began arriving at the library's temporary facility in 1972, it was in shopping bags, cardboard boxes, and dented trunks with French and Cuban labels. 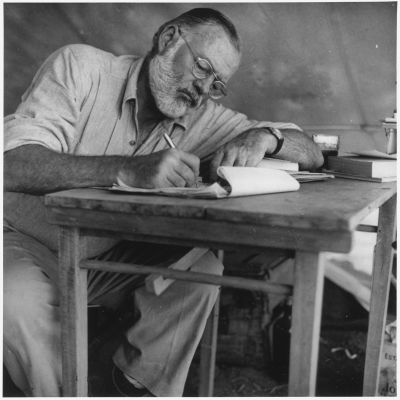 While the JFK Library may seem a surprising place for Ernest Hemingway's papers, John Kennedy would doubtless be pleased. When Kennedy wrote Profiles in Courage in 1956, he drew on Hemingway's definition of courage: remaining true to a personal code of ethics and moral character in the face of adversity. Kennedy once remarked, "Few Americans have had a greater impact on the emotions and attitudes of the American people than Ernest Hemingway."

The admiration was mutual. Hemingway was too ill to attend Kennedy's inauguration in 1960, but he expressed his "happiness and. . . hope and . . . pride. . . . I was sure our president could stand any of the heat to come as he had taken the cold of that day. Each day since I have renewed my faith and tried to understand the practical difficulties of governing he must face as they arrive and admire the true courage he brings as our President in times as tough as these are for our country and the world."

When Hemingway died a few months later, Kennedy mourned for the man who embodied his definition of a true hero: a stoic and solitary figure, doing the right thing, calmly showing grace under pressure. In spite of tension between the U.S. and Fidel Castro, the Kennedy administration arranged for the author's widow, Mary, to visit the Hemingways' old home in Cuba to secure his papers.

Kennedy once remarked, "Few Americans have had a greater impact on the emotions and attitudes of the American people than Ernest Hemingway."

Jacqueline Kennedy knew how much Hemingway had meant to the president. In 1968, as she was helping to plan the Kennedy Library, she corresponded with Mary Hemingway. With nothing more formal than a simple exchange of letters between the two women, Hemingway's widow agreed to give her husband's papers to the new presidential library.

She recalled that her husband "never discarded anything but magazine wrappers and three-year-old newspapers," and he didn't exactly have a system for saving everything else. No surprise then, that when the collection began arriving at the library's temporary facility in 1972, it was in shopping bags, cardboard boxes, and dented trunks with French and Cuban labels.

Mary Hemingway had always intended to give her husband's archives "to some place where [he] would be to himself and have a little personal distinction." With support from his family, the Hemingway Room has been made to evoke Finca Vigia, the author's home outside of Havana.

Mary Hemingway had always intended to give her husband's archives "to some place where [he] would be to himself and have a little personal distinction."

The room was still unfinished when the rest of the building opened to the public on October 20, 1979. First conceived in 1964, the library had broad popular support; over the next decade, over 30,000,000 people from all over the world donated $18,000,000 to the project. However, it took years to resolve the issue of the library's location; finally, in 1975, the Kennedy family decided to accept an offer from the University of Massachusetts of a site adjacent to the new campus it was building at Columbia Point in Dorchester. Designed by renowned architect I. M. Pei, the nation's memorial to the slain president has spectacular views of the Bay and the city John Kennedy loved so much.

Now more than 30 years later,the JFK Library and Museum remains one of the region's most popular destinations, drawing 100,000 visitors a year — residents, tourists, schoolchildren, scholars, and Kennedy admirers from all over the world.

"The Journey to the John. F. Kennedy Library," by Megan Floyd Desnoyers, in Prologue: Journal of the National Archives, Winter 1992.

"For Whom the Bell Tolls: From Post-Literary America, Ringing Praise for Ernest Hemingway," by Neil Shister, Boston Review, Summer 1999.