“July 31st.--A visit to what is called "Hudson's Cave," or "Hudson's Falls," the tradition being that a man by the name of Henry Hudson, many years ago, chasing a deer, the deer fell over the place, which then first became known to white men. It is not properly a cave, but a fissure in a huge ledge of marble, through which a stream has been for ages forcing its way, and has left marks of its gradually wearing power on the tall crags, having made curious hollows from the summit down to the level which it has reached at the present day. The depth of the fissure in some places is at least fifty or sixty feet; perhaps more, and at several points it nearly closes over, and often the sight of the sky is hidden by the interposition of masses of the marble crags. The fissure is very irregular, so as not to be describable in words, and scarcely to be painted,--jutting buttresses, moss-grown, impending crags, with tall trees growing on their verge, nodding over the head of the observer at the bottom of the chasm, and rooted, as it were, in air. The part where the water works its way down is very narrow; but the chasm widens, after the descent, so as to form a spacious chamber between the crags, open to the sky, and its floor is strewn with fallen fragments of marble, and trees that have been precipitated long ago, and are heaped with drift-wood, left there by the freshets, when the scanty stream becomes a considerable waterfall. One crag, with a narrow ridge, which might be climbed without much difficulty, protrudes from the middle of the rock, and divides the fall. The passage through the cave made by the stream is very crooked, and interrupted, not only by fallen wrecks, but by deep pools of water, which probably have been forded by few. As the deepest pool occurs in the most uneven part of the chasm, where the hollows in the sides of the crag are deepest, so that each hollow is almost a cave by itself, I determined to wade through it. There was an accumulation of soft stuff on the bottom, so that the water did not look more than knee-deep; but, finding that my feet sunk in it, I took off my trousers, and waded through up to my middle. Thus I reached the most interesting part of the cave, where the whirlings of the stream had left the marks of its eddies in the solid marble, all up and down the two sides of the chasm. The water is now dammed for the construction of two marble saw-mills, else it would have been impossible to effect the passage; and I presume that, for years after the cave was discovered, the waters roared and tore their way in a torrent through this part of the chasm. While I was there, I heard voices, and a small stone tumbled down; and looking up towards the narrow strip of bright light, and the sunny verdure that peeped over the top,--looking up thither from the deep, gloomy depth,--I saw two or three men; and, not liking to be to them the most curious part of the spectacle, I waded back, and put on my clothes. The marble crags are overspread with a concretion, which makes them look as gray as granite, except where the continual flow of water keeps them of a snowy whiteness. If they were so white all over, it would be a splendid show. There is a marble-quarry close in the rear, above the cave, and in process of time the whole of the crags will be quarried into tombstones, doorsteps, fronts of edifices, fireplaces, etc. That will be a pity. On such portions of the walls as are within reach, visitors have sculptured their initials, or names at full length; and the white letters showing plainly on the gray surface, they have more obvious effect than such inscriptions generally have. There was formerly, I believe, a complete arch of marble, forming a natural bridge over the top of the cave; but this is no longer so. At the bottom of the broad chamber of the cave, standing in its shadow, the effect of the morning sunshine on the dark or bright foliage of the pines and other trees that cluster on the summits of the crags was particularly beautiful; and it was strange how such great trees had rooted themselves in solid marble, for so it seemed.

After passing through this romantic and most picturesque spot, the stream goes onward to turn factories. Here its voice resounds within the hollow crags; there it goes onward, talking to itself, with babbling din, of its own wild thoughts and fantasies,--the voice of solitude and the wilderness,--loud and continual, but which yet does not seem to disturb the thoughtful wanderer, so that he forgets there is a noise. It talks along its storm-strewn path; it talks beneath tall precipices and high banks,--a voice that has been the same for innumerable ages; and yet, if you listen, you will perceive a continual change and variety in its babble, and sometimes it seems to swell louder upon the ear than at others,--in the same spot, I mean. By and by man makes a dam for it, and it pours over it, still making its voice heard, while it labors. At one shop for manufacturing the marble, I saw the disk of a sundial as large as the top of a hogshead, intended for Williams College; also a small obelisk, and numerous gravestones. The marble is coarse-grained, but of a very brilliant whiteness. It is rather a pity that the cave is not formed of some worthless stone.”

On this day in 1838, Nathaniel Hawthorne visited Natural Bridge just outside of North Adams. It was just the kind of awe-inspiring scene that so moved early tourists. A 30-foot-long natural marble bridge — the only one on the continent— spanned a deep chasm that had been carved by melting glaciers thousands of years before. A Romantic, Hawthorne found the crags and fissures, torrents and pools, brilliant white marble and deep shadows uplifting. He noted with regret that nature's work was even then being re-worked by man. Quarrymen were extracting pure white marble. Fortunately, even after a century of quarrying, Natural Bridge is intact. It is as compelling a sight today as it was in 1838.

When continents collided and began the slow process of building the Hoosac and Berkshire mountain ranges some 350 million years ago, the limestone was folded, lifted and subjected to such tremendous heat and pressure that it crystallized into marble. 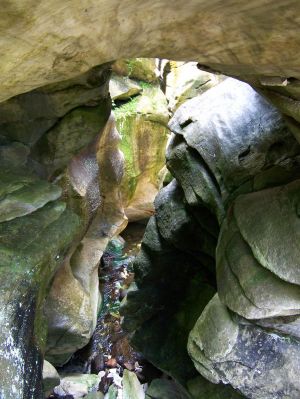 North Adams's "Natural Bridge" predates the town —and human habitation — by millennia. It is a product of natural forces that compressed, crystallized, scoured, and eroded the site over millions of years. Today, visitors to the ancient bridge also encounter a much newer feature on the landscape — an 80-foot-tall, crescent-shaped wall of white, almost blinding in its brilliance. Unlike the bridge, the wall is manmade, the remains of a quarry that began operating in the early years of the nineteenth century. As Tim Zelazo, the Supervisor of Natural Bridge State Park, puts it, "the interplay between nature and man and technology [is] stunning."

The story of Natural Bridge began 550 million years ago, when a warm, shallow ocean covered the area. Shells deposited over millions of years dissolved into a while chalky sediment called calcium carbonate. Eventually, the accumulated weight compressed the deposits into limestone. When continents collided and began the slow process of building the Hoosac and Berkshire mountain ranges some 350 million years ago, the limestone was folded, lifted and subjected to such tremendous heat and pressure that it crystallized into marble. At the end of the last ice age, 13,000 years ago, melting glaciers sculpted the chasm. Torrents of water poured through, carrying minerals that reacted with the calcium carbonate, dissolving the marble, and forming the white marble span.

. . . "if something needed to be white, this is the marble they used to whiten it. It's so bright that it was blinding to the workers when they were blasting it."

The first European-American known to describe this natural wonder was Seth Hudson, a soldier from nearby Fort Massachusetts in the 1700s. He gave his name to the brook and the largest cave on the site. By 1810 several companies had laid claim to, and begun quarrying, the high-grade pure-white marble around the bridge.

At first most of the marble was used as stone for cemetery monuments, storefronts, fireplace mantels, and hearths, and sold locally. A marble dam, the only one in North America, was built across Hudson's Brook, and in the early 1800s a mill was constructed to cut marble slabs. The high quality of the rock meant that in crushed form — calcium carbonate — it could be easily shipped around the county and to Canada and Mexico, where it was used for tooth and face powder, putty, and paint pigment. Zelazo explains that in the 1830s, "if something needed to be white, this is the marble they used to whiten it. It's so bright that it was blinding to the workers when they were blasting it."

. . . "there is a marble quarry close in the rear, above the cave, and in the process of time the whole of the crags will be quarried into tombstones, doorsteps, fronts of edifices, fireplaces, etc. That will be a pity."

Tourists were already familiar with the site when Nathaniel Hawthorne visited in the late 1830s. During the weeks he spent exploring the state's northwestern corner in the summer of 1838, he made several visits to Hudson's Cave and Natural Bridge. On July 31st, he observed that "there is a marble quarry close in the rear, above the cave, and in the process of time the whole of the crags will be quarried into tombstones, doorsteps, fronts of edifices, fireplaces, etc. That will be a pity."

In fact, the "whole of the crags" were never completely excavated. Parts of them were still intact after a century of intensive mining at the site. As late as the 1940s, the quarry was producing 200 tons of marble a day, but the operation was not profitable enough to be worth rebuilding when a fire destroyed the mill works in 1947. The owners sold the property to a couple who ran it as a tourist attraction until 1984. The following year, the Commonwealth of Massachusetts acquired the Natural Bridge and 47 acres for a state park.