From "The Custom-House, Introductory to The Scarlet Letter":

This old town of Salem – my native place, though I have dwelt much away from it, both in boyhood and maturer years – possesses, or did possess, a hold on my affections, the force of which I have never realized during my seasons of actual residence here. Indeed, so far as its physical aspect is concerned, with its flat, unvaried surface, covered chiefly with wooden houses, few or none of which pretend to architectural beauty, – its irregularity, which is neither picturesque nor quaint, but only tame, – its long and lazy street, lounging wearisomely through the whole extent of the peninsula, with Gallows Hill and New Guinea at one end, and a view of the almshouse at the other, – such being the features of my native town, it would be quite as reasonable to form a sentimental attachment to a disarranged checkerboard. And yet, though invariably happiest elsewhere, there is within me a feeling for old Salem, which, in lack of a better phrase, I must be content to call affection. The sentiment is probably assignable to the deep and aged roots which my family has struck into the soil. It is now nearly two centuries and a quarter since . . . the earliest emigrant of my name, made his appearance in the wild and forest-bordered settlement, which has since become a city. And here his descendants have been born and died, and have mingled their earthly substance with the soil….

The figure of that first ancestor, invested by family tradition with a dim and dusty grandeur, was present to my boyish imagination, as far back as I can remember. It still haunts me, and induces a sort of home-feeling with the past, which I scarcely claim in reference to the present phase of the town.

The Scarlet Letter by Nathaniel Hawthorne (1850).

On this day in 1850, Nathaniel Hawthorne and Herman Melville were among a small group who climbed to the top of Monument Mountain in the Berkshires for a picnic. Hawthorne had recently published The Scarlet Letter and was living in nearby Lenox. Melville was visiting Pittsfield. The two writers were meeting for the first time. A passing storm drenched the hikers, but the day marked the beginning of a warm friendship between the authors of two of the greatest American novels of all time. Melville dedicated Moby Dick to Hawthorne, with "admiration for his genius." Another example of Hawthorne's genius was The House of the Seven Gables, published in 1851. Like the Scarlet Letter, it drew on his family's long history in Salem.

Caught between self-doubt and a wish for recognition, Hawthorne described himself as the "the obscurest man of letters in America." 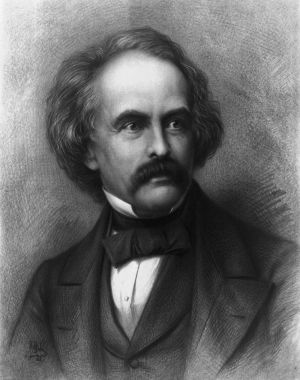 Just before 17-year-old Nathaniel Hawthorne left for Bowdoin College in 1821, he asked his mother "What do you think of my becoming an Author, and relying for support upon my pen?" We do not know how the widowed Mrs. Hawthorne answered her son's unusual question, but we do know that the adult Nathaniel Hawthorne struggled to find ways to support his family and find time to write.

He was born in Salem on July 4, 1804. When Nathaniel was four, his ship captain father died while on a voyage to South America, and his mother took her children and moved in with her parents. Hawthorne lived in Salem for most of the next 30 years.

After graduating from college in 1825, he returned to "Castle Dismal," as he called his family's house in Salem. He did not get a job but immersed himself in studying historic records, read widely, and took long walks. He wrote short stories, which were printed in newspapers, magazines, and literary journals — all anonymously. Caught between self-doubt and a wish for recognition, Hawthorne described himself as the "the obscurest man of letters in America."

In 1837 Twice-told Tales, a collection of his previously published stories, came out under his own name. He sent a copy to his college friend, the poet Henry Wadsworth Longfellow, who promptly wrote an admiring review. Nathaniel Hawthorne would never be obscure again.

In the same year, he met Sophia Peabody, the youngest of the three talented Peabody sisters. A courtship followed and then a secret three-year engagement. The couple was married on July 9, 1842.

"What do you think of my becoming an Author, and relying for support upon my pen?" 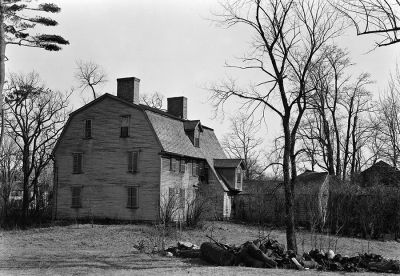 On the day they married, Nathaniel and Sophia Hawthorne moved to an eighteenth-century parsonage in Concord. Hawthorne named the house the "Old Manse," a name it bears to this day. The couple also referred to it as their "Paradise," and considered their three years there the happiest of their lives. Nathaniel Hawthorne was not one for small talk, and he struck some townspeople as standoffish, but the couple entertained many visitors in their home, including Margaret Fuller and Ralph Waldo Emerson. Hawthorne was especially drawn to Henry David Thoreau and enjoyed spending time walking and rowing on the river with the great naturalist.

During these years he wrote some 20 short stories, but payment from magazines was meager and slow in coming. After the birth of their first child, Una, in March 1844, the Hawthornes found themselves in dire straits; they were months behind on their rent. The following year, the owners of the Concord house decided to return, and the Hawthornes reluctantly moved back to Salem to live with his extended family.

In April 1846 politically connected friends helped him win appointment as surveyor of the Salem Custom House. A steady paycheck eased the family's finances, and they were able to rent a house of their own. In June of that year, their son Julian was born and Mosses from an Old Manse was published. His job was far from demanding; he had time to ponder ideas for longer tales. Tradition has it that he jotted down notes for The Scarlet Letter while sitting at his desk at the Custom House.

A few critics objected to the "scandalous" material in The Scarlet Letter, but others immediately recognized its genius. 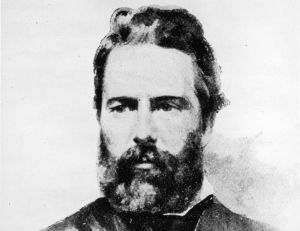 In 1849 the political winds shifted and Hawthorne was out of a job. Angry and dejected, he retreated to his study and wrote the novel that would bring him worldwide recognition. The Scarlet Letter was published on March 16, 1850.

A few critics objected to the "scandalous" material in The Scarlet Letter, but others immediately recognized its genius. And the reading public was captivated. The first printing sold out in two weeks. Yet royalties from even a successful book were not enough to support a family of four. Unable to pay the rent on their Salem house, the Hawthornes moved to the Berkshire County town of Lenox, where they had been offered a small, inexpensive cottage.

There Hawthorne completed The House of the Seven Gables, published in April 1851. Although the book was well received, it did not sell as well as The Scarlet Letter. The Hawthornes' third and last child, Rose, was born a month later, and the small house became even more cramped. In spite of his friendship with Melville, who was living in nearby Pittsfield, Hawthorne felt increasingly isolated in the Berkshires.

In February 1852, the family returned to Concord and bought the only home they would ever own; Hawthorne christened it "Wayside." They had barely settled in before he was offered a position as consul in Liverpool, England. He owed the job to his having written the campaign biography for his lifelong friend and now president, Franklin Pierce. In July 1853, the five Hawthornes sailed for Europe.

"I spend a monotonous life, seldom quitting my own hillside and trying earnestly to take root here," he wrote sadly. 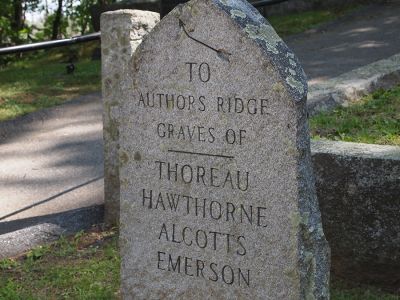 They spent the next seven years in England, Italy, and France. When Hawthorne returned to Concord, the town seemed small and provincial by comparison. He published several articles and a book of reminiscences, Our Old Home: A Series of English Sketches; all were well received. However, his attempts at fiction displeased him. "I am tired of my own thoughts and fancies and my own mode of expressing them," he lamented to a friend in 1863.

During his years abroad, the sectional crisis in the United States had escalated. Thoreau and Emerson, his closest associates during his years at the Old Manse, were committed and outspoken abolitionists. Hawthorne had no interest in the anti-slavery cause. He chose to distance himself from the most important issue of his time. Always a reserved man, he now became reclusive. "I spend a monotonous life, seldom quitting my own hillside and trying earnestly to take root here," he wrote sadly. He believed he had stayed abroad "a little too long, and as a consequence, have lost my home-feelings for the present, if not forever."

His spirits and health declined. In the spring of 1864, a distraught Sophia wrote that her husband "has wasted away very much . . . and he has had no spirit, no appetite, and very little sleep." Despite her urging, Nathaniel refused to see a doctor. In May he traveled to New Hampshire with former President Pierce. The family hoped the trip would restore his health, but when the author returned to Concord, it was to be laid to rest at Sleepy Hollow Cemetery.

House of the Seven Gables in Salem is believed to be the setting for the novel. The site also includes Hawthorne's birthplace.

The Old Manse in Concord is open seasonally.

Wayside, owned by the National Park Service, is open seasonally.

On this day in 1838, Nathaniel Hawthorne visited Natural Bridge just outside of North Adams. It was just the kind of awe-inspiring scene that so moved early tourists. A 30-foot-long natural marble bridge — the...