The first Pudding Play came off Friday evening, December 13, 1844, almost fifty years ago. We had no clubhouse then, and no place for our meetings, but held them in rotation at each other's rooms. The next was to be at mine, Hollis 11, and it occurred to me that it would be a taking novelty to get up a play, instead of the Alligator or Mock Trial, as usual.

I had see "Bombastes Furioso" played at the Tremont Theatre not long before . . . and I thought that would be about the right thing if we could manage it; so I took [classmate] Peter Augustus Porter into my confidence over a bowl of stewed oysters at old Snow's. He was enthusiastic at the idea, and we soon filled up the cast. . . .

Our wardrobe was primitive but effective.My general's coat for Bombastes I saw hanging at the door of one of the second-hand clothing stores that used to line Brattle street, as I was on my way one day to take the omnibus; and I rushed in, tried it on, and secured it, and took it in triumph home, done up in newspapers. With some brilliant yellow flannel I manufacture huge epaulets and gorgeous trimmings, and succeeded wonderfully with a chapeau and a wig of the finest tow. . . .

The King and Fusbos were equally busy and ingenious, as also were the courtiers and the army, and the results in costume were really stunning; and Distaffina, having taken some lady friend into his confidence, was rigged in a manner that was positively charming. Porter sketched a scene on some big sheets of brown paper . . . we rigged a curtain, . . . got in all the chairs that could be had in the entry, and before prayers on the eventful evening the theatre was declared complete.

As no one but the actors knew of the play, it was a great surprise to the Club on assembling to see my room transformed into such a beautiful theatre. The play went of splendidly, — Distaffina wore a low neck and short sleeve, and on her introducing a fancy dance, the applause almost shook old Hollis down. Another member of the Club lived in the rooms across the entry, and there we had the pudding after the play; the actors kept on their dresses, and poor Distaffina was nearly bothered to death by her admirers.

This was the first play performed by the Hasty Pudding Club.

"The First Pudding Play," by Lemuel Hayward, originally printed in The Harvard Graduates' Magazine, April of 1893.

Of course I've heard of the Hasty Pudding Club - as I read the piece it occurred to me that I didn't know what "hasty pudding" was. What are the ingredients? How is it made or served, or eaten? Some slight on-line research reveals that in the United States hasty pudding is a sort of cornmeal mush which is sometimes allowed to solidify and then cut up and fried. ------------------------- Jim Cooke
Login

On this day in 1795, 21 Harvard students gathered in a dorm room and formed a secret social club to cultivate "friendship and patriotism." Members agreed to take turns providing a pot of hasty pudding for the meetings. Thus did the Hasty Pudding Club, the nation's oldest dramatic institution, get its name. In the early years, the club staged mock trials. In 1844 it produced the first of its trademark shows where men played both the male and female parts. Theodore Roosevelt, John F. Kennedy, Alastair Cooke, Jack Lemmon, and George Plimpton all performed in drag on the stage of the Pudding's historic playhouse in Harvard Square. Women are now involved in every aspect of the shows except one: men continue to play all onstage roles.

The closest a woman has ever come to performing was in 1955, when costumer Lucy Barry shrieked from the wings. None of the 20 men in the cast of that year's show could produce a convincingly bloodcurdling scream. 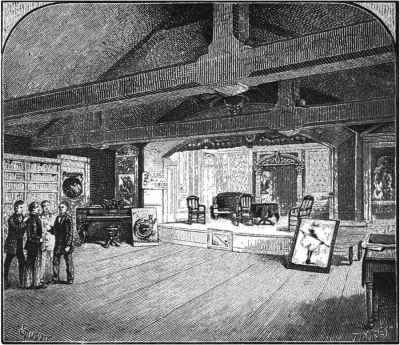 Early Hasty Pudding history can be hard to recover — the club secretaries were required to keep the minutes in rhymed doggerel!

The founders of the Hasty Pudding Club were not embarking on a theatrical venture. In the years after the Revolution, fraternal societies, many of them with secret rituals, enjoyed wide popularity in the U.S. The first American citizens considered voluntary associations essential to the success of a democratic republic. The Harvard students may have been emulating George Washington, who was a leading member of both the Masons and the fraternal, patriotic (and secret) Society of the Cincinnati.

Harvard College at the turn of the nineteenth century could be a rowdy place; there were several student riots over food and discipline. Hasty Pudding Club meetings were often disorderly affairs; members instigated a mock court to try "crimes" such as "insolence" and "contempt of the club."

The trials proved to be such a great success that the club revised its rules to include one at every meeting. "No figure was safe from condemnations by this amateur court system — Cortez was convicted for 'massacres and cruelties,' the British Parliament stood guilty for its beheading of Charles I, and the college administration was indicted for 'compelling the whole body of students to pursue the dry, repulsive . . . study of mathematics.'"

Hasty Pudding Club meetings were often disorderly affairs; members instigated a mock court to try "crimes" such as "insolence" and "contempt of the club."

In 1844 senior Lemuel Hayward learned that he would be hosting the club's next meeting of the club. Instead of a mock trial, he transformed his room into a primitive theater and staged a production of a popular farce. A club member in drag played the one woman in the cast — the first "hairy-legged heroine" in Hasty Pudding history. This was the first of the shows the Hasty Pudding Club has been famous for ever since.

The members were delighted by the innovation. While the plays were still performed in their rooms solely for club members, over the years they became more elaborate. The students enlisted graduates and Boston theater professionals to help them create costumes and design sets. The first productions used existing scripts, but by the 1860s, the shows were all written by Harvard students. The club's reputation grew, and non-members began to fill the audience. Initially the university disapproved of the productions, but in 1876, it finally gave the club the use of a little barn-like building on the edge of the athletic field.

Instead of a mock trial, he transformed his room into a primitive theater and staged a production of a popular farce. A club member in drag played the one woman in the cast — the first "hairy-legged heroine" in Hasty Pudding history.

In 1882 the club produced its first musical, a spoof of Virgil's Aeneid. "Dido and Aeneas" was such a hit that the club took it on the road. Flush with profits from ticket sales, in 1888 the Hasty Pudding built its own theater at 12 Holyoke Street in Harvard Square. For the next 117 years, the club presented its annual show, with breaks only during the world wars. One tradition remained unbroken: Even as women students became active members of the club, they did not appear on stage. The closest a woman has ever come to performing was in 1955, when costumer Lucy Barry shrieked from the wings. None of the 20 men in the cast of that year's show could produce a convincingly bloodcurdling scream.

In 1951 the club named its first Woman of the Year. Every year since them, a female performer who has made "a lasting and impressive contribution to the world of entertainment" has been invited to Cambridge, paraded through the streets, roasted, and presented with a "Pudding Pot." Beginning in 1967, members have also chosen a Man of the Year and accorded him similar treatment. Recipients have included such stars as Katharine Hepburn, Meryl Streep, Julia Roberts, Clint Eastwood, Tom Cruise, and Steven Spielberg.

After a few rocky years in the late 1990s, Harvard assumed ownership of the Pudding's Holyoke St. building. In the spring of 2005, the landmark playhouse closed. An enlarged and renovated theater opened on the site in 2007.

The Hasty Pudding Club Theatricals are presented at Harvard University's Farkas Hall performance center. The lobby of the building is dedicated to the club's history.

On this day in 1969, Harvard students took over University Hall, one of the college's oldest buildings. Opposed to the escalating war in Vietnam, the protesters demanded Harvard end its Reserve Officers' Training Corps, or...