From the Harvard Crimson:

More than 400 policemen charged University Hall early this morning and forcibly — and sometimes violently — removed several hundred students who were occupying the building.

… President Pusey said this morning that … "It became clear … that the only possible alternative [to calling in police] was to take no action at all,…"

… Starting at about 5:05, about 75 State Police entered University Hall, and began dragging demonstrators out of the building. The people inside University Hall first heard rumors about the bust at 3:40 a.m. For the next hour, people woke up and milled around the first floor, where they had earlier agreed to make their stand against the police. They sang radical songs, received wet pieces of linen and instructions for there use against tear gas, and the phone numbers of lawyers who had agreed to defend those arrested.

At 4:58 a student rushed in and screamed the "Cops are coming." A moment later the shining blue helmets of the Massachusetts State Police could be seen through the windows. The demonstrators linked arms and started to chant, "Smash ROTC, no expansion."

…The troopers herded the people out of the anteroom, jabbing some in the back with clubs, shouting "Faster, faster." Several were pushed part-way down the stairs, and the group was taken to paddy wagons.

…The crowd of about 500 students in the Yard chanted, "Pusey Must Go," "Strike, Strike," and "Close the Place Down."

By 5:15, police had started to load students from inside the building onto buses and paddy wagons. Some resisted and were dragged and shoved into the buses. Within ten minutes, the buses had been filled with about 300 to 400 students, and they left for Middlesex County Third District Court, where the students were booked on charges of criminal trespassing.

Police slowly cleared students from the rest of the yard. At 6 a.m., the State Police marched back to their buses and left.

…Over 700 students gathered on and in front of the steps of Widener Hall between 6 a.m. and 6:15 to discuss a possible student strike.

Quite right! I've changed the figure to reflect the most current reports.
Login

On this day in 1969, Harvard students took over University Hall, one of the college's oldest buildings. Opposed to the escalating war in Vietnam, the protesters demanded Harvard end its Reserve Officers' Training Corps, or ROTC, program. The demonstrators had vowed non-violent resistance, but in the early hours of April 10th, university administrators made the unprecedented decision to call in city and state police. The use of billy clubs and mace to remove the demonstrators outraged even those members of the community who did not support the takeover. The sit-in at Harvard and the so-called "bust" that ended it were part of a national phenomenon, but, as one participant put it, "Like it or not, whatever goes on at Harvard gets a lot of attention." 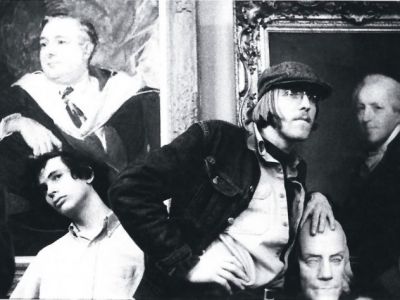 On the same day students at Boston University were conducting a tactical retreat after occupying a building for 2½ hours in a protest against the Vietnam War, across the river in Cambridge approximately 30 Harvard students staged a takeover of University Hall, an administrative building located in the middle of historic Harvard Yard. One of many student demonstrations on college campuses that year, the sit-in at Harvard would be short-lived but have lasting consequences.

The protest was organized by the Harvard chapter of Students for a Democratic Society (SDS). Formed at the University of Michigan in 1959, SDS initially concentrated on the Civil Rights Movement. When the war in Vietnam intensified in the mid-1960s, SDS shifted its focus to opposing the war and became increasingly radical.

On the night of April 8th, SDS members had led about 300 students to the home of Harvard's President, Nathan Pusey, where they tacked a list of demands to the door. Half the demands related to abolishing Harvard's Reserve Officers' Training Corps (ROTC) and providing students enrolled in ROTC with alternative scholarships. The editors of the Harvard Crimson expressed a view widely held on college campuses: "ROTC is based on the notion that the country's universities should serve the needs of the warfare state" and the "over-expansion of the American military machine has become perhaps the greatest threat of all." On a practical level, ROTC's presence on campus made it an obvious target for anti-war protests. 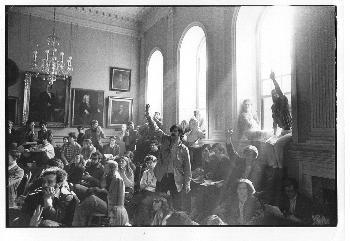 The rest of the Harvard students' demands dealt with the university's role in the local community. They wanted Harvard to lower the rents it charged on the many apartments it owned in Cambridge and sought guarantees that the university would not tear down residential buildings to expand its medical complex in a working-class Boston neighborhood.

On noon on April 9th, about 30 students entered University Hall and ejected all administrators and staff from the building "under duress," as one participant described it. Students picked up and carried one dean outside — a scene pictured on the front page of national newspapers and an action for which the students were later severely disciplined.

As word of the takeover spread, students and faculty gathered outside. Meanwhile, inside, the students chained the doors shut, raised the red and black SDS flag outside, and began an intense debate about what to do next.

To "minimize the risk of any spread of further violence," officials closed off Harvard Yard, except for one gate through which ID-carrying freshmen could return to their dormitories. President Pusey dismissed the student demands out of hand. Various points were being or would be considered by appropriate committees, he said, and the rest had "no basis in fact." Despite administration threats that students would be arrested for trespassing, the number of protesters grew; by nightfall, The Boston Globe estimated that there were 500 inside.

Despite administration threats that students would be arrested for trespassing, the number of protesters grew.

At 3 a.m. on April 10th, city and state police heeded Harvard's request to take control of University Hall. The students had vowed non-violent resistance to any attempt to remove them; they formed a human chain across the doorway. Armed with billy clubs and mace, 400 police officers arrested more than 100 protesters.

Tension escalated quickly. Students and faculty alike were outraged by the unprecedented exercise of police power on the campus. Students assembled at Memorial Church and called for a three-day strike. The faculty of Arts and Science issued a statement deploring both the "forcible occupation" and "the entry of police into any university." Some professors believed it wrong, some termed it "unwise," and the rest described the police action as "unavoidable though regrettable."

There was general agreement, however, that criminal charges against Harvard students and faculty should be dropped, and disciplinary action left to the university. Furthermore, appalled by the manner in which the administration had decided to involve the police, students and their supporters on the faculty demanded a restructuring of university governance to give students and faculty a greater voice.

The police charged almost all the protesters they had arrested with trespassing. Although the administration requested that the charges be dropped, the presiding judge ruled that 35 demonstrators would stand trial for criminal trespass. Most paid the $20 fine. Those who appealed were successful, since the police had no way of proving who was inside University Hall and who was outside. Three young men faced the more serious charge of assault and battery. Two were convicted and sentenced to nine months in jail. Harvard's own disciplinary proceedings resulted in the expulsion of 23 students, who could apply for readmission in the future, and the permanent expulsion of three others.

The faculty of Arts and Science issued a statement deploring both the "forcible occupation" and "the entry of police into any university."

The campus was almost universally opposed to the administration's actions, and a boycott of classes began. On April 14th, 10,000-12,000 people attended a four-hour meeting at the Harvard Stadium. Six thousand remained by the time the voting began. A series of votes was taken and a motion to continue the strike for another three days finally carried. On the 17th, a smaller crowd of 5,000 attended a second mass meeting at the stadium. They voted by a margin of more than two to one to suspend the strike. The University Hall takeover and the strike that followed produced changes not only in the university's policy toward ROTC but in its governance, curriculum, and community relations as well.

The 1969 protest was neither the first nor the last on the Harvard campus. The first major demonstration occurred two centuries earlier in 1766 when students staged "The "Butter Protest," with the rallying cry "Behold, our butter stinketh!" The college responded by expelling 155 students.

Although no longer front-page material, student demonstrations have continued. In 2001, several dozen students occupied Massachusetts Hall, the oldest standing building on the campus, for three weeks to protest the low wages paid to janitorial, food service, and maintenance workers. Harvard, whose endowment is now (as of the end of fiscal year 2005) 25.9 billion dollars, eventually agreed to raise the hourly wage to $10.25.

Free tours of historic Harvard Yard are available for prospective students and tourists.

Documents relating to history of ROTC at Harvard, 1950-1989. “The Harvard Crimson” Online

On this day in 1971, over 450 anti-war protesters occupied the historic Lexington Green and refused to leave. The Vietnam Veterans Against the War had organized a three-day march from Concord to Boston — Paul...