To early fans of the sport, he must have seemed an improbable basketball star –18 years old, a trained violinist and, most disturbing to racists in the audience, African-American.

But none of that stopped Harry Haskell "Bucky" Lew from playing the game – or making history….

"According to my father, he was the best double dribbler he had ever seen," says Gerry O'Connor of Methuen, whose late father, Dan, played on one of Mr. Lew's teams in the 1920s. Mr. Lew was also known as a fine defensive player who routinely guarded the best player on any opposing team.

His talents were not enough to protect him from the taunts of bigots, however.

Once, players from Natick refused to come onto the court until the Haverhill coach removed Mr. Lew from a game. Mr. O'Connor says his father often spoke of the time that some fans jeered Mr. Lew and called out racial slurs during a game with another Massachusetts team.

"After the first quarter, my father went out on the court, called for silence and said that the person they were insulting was the most decent man on the team," the younger Mr. O'Connor recalls. "My father said if there was one more sound for the rest of the game, his team was leaving."

The game continued without incident….

From 1913 to 1925, when Mr. Lew was between the ages of 29 and 42, he was player and general manager for his own Lowell-based teams, the Centrals, Lowell Athletic Association and Lowell Five…

Mr. O'Connor remembers his father talking about how the Lowell Five "had an old car, a Packard, and they'd all pile in and go. There were only five in the group, so you didn't get injured."

In 1926, Mr. Lew started acting as referee for semi-professional basketball teams in the area, and in 1928, he and his family moved to Springfield, the Massachusetts city that would become the site of the National Basketball Hall of Fame.

More information on the Lew Family is available on the Center for Lowell History website: http://library.uml.edu/clh/Prof/Pro3.Html
Lew Family

My definite impression from the '70s and '80s is that the Celtics were monomaniacal about having as white a team as possible. This article makes them into paragons of progressivism which they notoriously do not deserve.
Login

On this day in 1884, Harry Haskell Lew was born in Lowell to a family that had long been active in the struggle for racial equality. Known from childhood as "Bucky," he made his mark as the first African American to play professional basketball. After leading the local YMCA team to a Merrimack Valley championship, he played defense for the Pawtucketville Athletic Club in the New England Basketball League. When the League folded, Lew stayed in the game, working as a player and general manager for his own Lowell-based teams. In 1928, he moved to Springfield. One of the pioneers of basketball, he has never been inducted into the Hall of Fame, located just a few miles from where he spent the last 35 years of his life.

Bucky Lew was the first Black man to play in a professional basketball game. 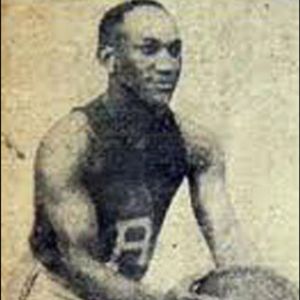 Harry Haskell Lew was born in Lowell in 1884 to an African American family with a long and illustrious history in Massachusetts. His great-great-grandfather, Barzillai Lew, was a free black man who purchased the freedom of his future wife for $400. A gifted musician, he served in the Revolutionary War. He played the fife at the Battle of Bunker Hill, and years later at General Burgoyne's surrender after the Battle of Saratoga. Harry Lew's grandparents' home in Lowell was a stop on the Underground Railroad. His father, William, was a delegate to the 1891 Equal Rights Convention in Boston.

Harry Lew would play his own role in the struggle for freedom, equality, and human dignity. He would be the first black man to play in a professional basketball game.

He came of age in the Jim Crow era when "separate but equal" kept blacks and whites in different worlds, in the North as well as the South. Breaking the color barrier on a Lowell basketball court was not easy. Bucky Lew was a talented musician—he played a violin solo at his graduation from Lowell High School — an excellent student, and an extraordinary basketball player. According to one of his teammates, he was "the best double dribbler he had ever seen" (double dribbling was legal at the time). A brilliant defensive player, he was always chosen to guard the best player on any opposing team. But when Lew first took the court against white men, his skillful play was met with jeers and racial slurs.

"All those things you read about Jackie Robinson, the abuse, the name-calling, extra effort to put him down ... they're all true."

Years later "Bucky" Lew reminisced about that first game. On November 7, 1902, his team, Lowell's Pawtucketville Athletic Club, faced a team from Marlborough. He remembered that his manager was reluctant to let him play against white boys. But Lew was a hometown boy, and "some of the local papers put the pressure on by demanding that they give this little Negro from around the corner a chance to play. Well, at first the team just ignored the publicity. But a series of injuries forced the manager to take me on for the Marlborough game."

Lew was supposed to be the extra man, and to spend the game sitting on the bench, but then one of the starting players was injured. At first the manager refused to put him in. "He let them play us five on four," Lew remembered, "but the fans got real mad and almost started a riot, screaming to let me play. That did it. I went in there and you know... all those things you read about Jackie Robinson, the abuse, the name-calling, extra effort to put him down ... they're all true. I got the same treatment and even worse ... I took the bumps, the elbows in the gut, knees here and everything else that went with it. But I gave it right back. It was rough but worth it. Once they knew I could take it, I had it made."

"Some of the local papers put the pressure on by demanding that they give this little Negro from around the corner a chance to play."

This was only the first of Lew's encounters with racist opponents and fans. "Nobody ever voiced an objection to playing against him as a black player until they played him and he would shut down their best player... Then all of a sudden, they would say, we don't want to play against a Negro player. They just used that tactic to get him off the court for the next game."

After Lew played one year with the Lowell team and two years for a Haverhill team, the New England League disbanded. Lew formed and traveled with his own team, playing and coaching, for another 20 years. When the National Basketball Association was formed in 1949, "Bucky" Lew had paved the way for the Boston Celtics to be the first team to draft a black player (1950). The Celtics later went on to be the first NBA team to have an all-black starting line (1963) and a black head coach (1966).

"He would shut down their best player...all of a sudden, they would say, we don't want to play against a Negro player. They just used that tactic to get him off the court for the next game."

"Bucky" Lew was a man of courage and perseverance. "He didn't talk much about basketball," his daughter told a reporter, "but sometimes, if things weren't going so well for one of us, or if we were having difficult times, he'd talk about how things were for him back then. He used his athletic experience to teach us what life was about."

His sister and brother shared his willingness to break barriers. His sister graduated from Lowell High School as salutatorian, became a teacher, and later received a law degree. His brother was a football star at the University of Massachusetts Amherst; he taught school and later co-founded the DuSable Museum in Chicago, the nation's first museum of African American history and art. Among the artifacts on display is the powder horn used by Barzillai Lew during the War for Independence. Harry "Bucky" Haskell Lew played his own part in the struggle to make the promise of the Revolution a reality.

The Center for Lowell History at the University of Massachusetts Lowell was established in 1971 to preserve and provide access to materials related to the history of Lowell and the university.