From "The Hatrack Case" by H.L. Mencken

As I reflected upon the matter it became evident that something would have to be done, for if [John] Chase [head of the Watch and Ward Society] were permitted to get away with this minor assault he would be encouraged to plan worse ones, and, what is more, other wowsers elsewhere would imitate him…

It was accordingly arranged that Hays and I should meet in Boston on Monday morning, April 5 - one week after the suppression of the magazine, and I should there sell a copy of the April issue on the Common, and defy Chase to order my arrest…

[My lawyer Herbert B.] Ehrmann told me that the first business in hand was to take out a peddler's license. It had to be obtained from the Superintendent of Peddlers in the Boston Health Department, and getting it took some time. Meanwhile Ehrmann had made contact with Chase, and tried to induce him to meet me in public and buy a copy of the April issue. It was a difficult job getting his consent. In the past he had always had his own way in Boston, but now an apparently bellicose stranger had come to town to challenge him, with a lawyer of national prominence to brew the legal medicine, and he was considerably alarmed….

He finally agreed, though still very reluctantly, to meet me at 2PM on April 5 at the corner of Park and Tremont – the celebrated Brimstone Corner… I got [there] a little before two o'clock, and found a huge crowd assembled – largely made up, it appeared, of Harvard undergraduates. …I made my way to the agreed rendezvous with some difficulty, for the crowd was very dense, and called for Chase. A youngish man stepped up, said that he was Chase's assistant, and offered to buy the test magazine. When I refused to sell it to him he offered to produce evidence that he was the accredited agent of the Watch and Ward society, but I still refused, and demanded that Chase appear in person.

There was more delay here, but then cries of, "Here he is!" were set up, and he slowly pushed his way toward me. With him were Captain George W. Patterson, chief of the Boston Vice Squad, and a young officer in plain clothes. The actual sale took but a few seconds. Chase identified himself, I offered him a copy of the magazine, he handed me a silver half dollar, I bit it as if to make sure it was a good coin, and Chase said to Patterson, "I order this man's arrest."

Garret then tapped me on the arm and the laborious march to police headquarters began. They were in a little court called Pemberton Square, only four blocks away, but Park Street, which we had to traverse, was crowded …When we finally got into the little headquarters building, I was led to the second floor… and there booked on a charge of violating Chapter 272, Section 28, of the Public General Laws of Massachusetts by possessing and selling obscene literature.

Quoted in The Editor, The Bluenose and the Prostitute: H.L. Mencken's History of the 'Hatrack' Censorship Case, ed. by Carl Bode (Roberts Rhinehart, 1988).

On this day in 1926, reporter and literary critic H.L. Mencken was arrested on Boston Common for selling a magazine that had been banned by the New England Watch and Ward Society, the city's self-appointed moral censors. A fierce defender of free speech, Mencken had traveled to Boston with the express intention of getting himself arrested. The minute he sold a copy of the magazine, the vice squad took him into custody. Not everyone in Boston agreed with the Watch and Ward Society, and the next day a judge ruled in Mencken's favor. He was acquitted on all charges. The victory was short-lived, however. Boston continued to lead the nation in the banning of books for another 30 years.

The driving force behind the city's puritanical purges was the Watch and Ward Society, founded in 1878 to "watch and ward off evildoers." 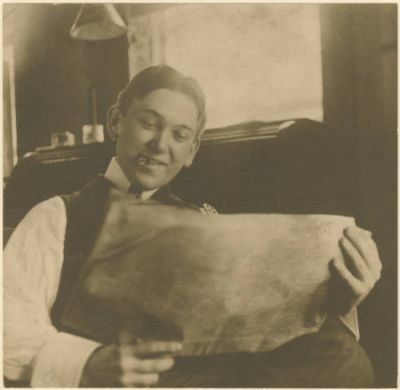 The phrase "Banned in Boston" has its origins in the early 1900s. Boston may have trailed New York in most ways, but it led the nation in practicing censorship based on moral grounds. The driving force behind the city's puritanical purges was the Watch and Ward Society, founded in 1878 to "watch and ward off evildoers."

According to the Globe, during the heyday of the Watch and Ward, "the Boston Public Library kept books the society considered objectionable in a locked room, the Museum of Fine Arts kept part of its Asian collection behind closed doors, and the label 'banned in Boston' became a selling point for salacious books from New York to San Francisco." The members of the Watch and Ward Society encountered little resistance — until they targeted H.L. Mencken.

Known as "the Bard of Baltimore," where he was born in 1880, Mencken rejected his Methodist upbringing and made it a habit, in the words of one biographer, "to speak out forcefully, pungently, and satirically against the follies of religion." He was particularly critical of religious fundamentalists, whom he blamed for attempting to use the power of government to enforce their moral views. The passage of Prohibition in 1920 enraged him, as he believed deeply that people should pursue their happiness with as little government interference as possible. Censorship also angered him. In 1922 Mencken declared, "I am, in brief, a libertarian of the most extreme variety, and know of no human right that is one-tenth as valuable as the simple right to utter what seems (at the moment) to be the truth."

"the label 'banned in Boston' became a selling point for salacious books from New York to San Francisco." 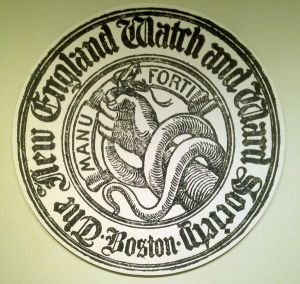 A skillful reporter, Mencken earned a national reputation covering the Scopes "Monkey" trial in Tennessee for the Baltimore Sun. He skewered attorney William Jennings Bryan for proposing that teaching evolution should be a crime and depicted him as a religious "fanatic, rid of sense and devoid of conscience." He championed Clarence Darrow as a defender of free speech and the Bill of Rights.

One of several magazines he edited was the American Mercury, which frequently included pieces critical of established social conventions and authorities. He loved to lampoon the self-righteous enforcers of morality in Boston. He famously defined Puritanism as "the haunting fear that someone, somewhere may be happy."

Mencken relished the chance to take on the Watch and Ward Society; in doing so, he was striking a blow to the heart of Boston's Protestant elite. The Society was founded in 1878 to fight corruption in business and politics; in 1906 it shifted its attention to defending conventional morals and became a "citizen's vigilance" group protecting Boston from vice.

He famously defined Puritanism as "the haunting fear that someone, somewhere may be happy."

City officials did not question the Watch and Ward Society's right to define what was and was not obscene. It reviewed books, plays, and other forms of artistic expression, looking for moral corruption. If the Society deemed an item obscene, it would notify local booksellers and news dealers. Under a gentleman's agreement with city police, the vice squad would arrest anyone who continued selling the offending work. A person who purchased a banned book risked prosecution for violating the state's obscenity laws.

The April 1926 issue of the American Mercury was irresistible to the Watch and Ward Society. It contained an ad for a book deemed obscene and an essay proposing a "New View of Sex" as purely "a pastime for leisure hours." But it was "Hatrack," a short story by Herbert Asbury that generated the most notice. Asbury (later the author of The Gangs of New York) wrote a purportedly true account of a prostitute from his hometown in Missouri who regularly sought forgiveness at the local Methodist church. The congregation shunned her and, unsaved, she continued her life of sin, meeting her Catholic customers in the Protestant cemetery and her Protestant customers in the Catholic graveyard.

When the Watch and Ward Society immediately banned the issue as obscene, Mencken boarded a train for Boston. Once in the city, he orchestrated a meeting with John Chase, the Society's director, at the "Brimstone Corner" on Boston Common. With police, press, and a rowdy crowd of students on hand, Mencken offered Chase a copy of the magazine. Chase gave him a half-dollar piece (which Mencken bit for effect). Within minutes, the Boston vice squad placed H.L. Mencken under arrest.

A person who purchased a banned book risked prosecution for violating the state's obscenity laws.

In court, the judge found that the magazine was not obscene and acquitted Mencken on all charges. Mencken then sued the Watch and Ward Society for illegal restraint of trade. Again he was successful. A federal judge ruled that it was the responsibility of prosecutors, not private citizens, to censor literature.

H.L. Mencken was not quite done with lawsuits. Just a few days after his victory in Boston, the Solicitor of the U.S. Post Office declared that, despite the judge's ruling, American Mercury was obscene and therefore sending it through the mails was a federal offense. Mencken responded by suing the U.S. Post Office. A month later, the courts dismissed the case on a technicality since the magazine had already been mailed and delivered. Mencken was disappointed; he had hoped his suit would become a landmark free-speech case.

H.L. Mencken died in 1956. By then the Watch and Ward Society had changed its name to New England Citizens Crime Commission and shifted its focus to gambling. The organization gained national attention in 1962 when it helped CBS News expose Boston police involvement in betting. A Miami newspaper reported, "Not since the British imposed a tax on tea have Bostonians been so aroused."

The Old South Meeting House on Boston's Freedom Trail has a permanent exhibit on the religious, political, and social debates that took place there.

"Banned in Boston," in Newspaper Story: One Hundred Years of the Boston Globe, by Louis M. Lyons (Belknap Press, 1971).