Had there ever been any serious doubt as to the prospective popularity of the new Symphony Hall, it would have to be declared completely banished after the experiences incident to last evening's dedication.

For not only was the stately and beautiful temple, which is henceforth to be devoted to the worship of the goddess of music, filled by an audience representative of the wealth and cultured circles of Boston society, but evidences of the complete satisfaction of everybody with the edifice and all its appointments were so apparent….

There was a bustling kind of subdued enthusiasm, and a sort of joyous murmur of general conversation to be heard, continually, both before the program chosen for the dedication of the hall began, and during the intermission, that probably never was known in like degree in old Music hall, and which testified as unmistakably as though in spoken phrase that everybody was happy in the new environment and felt justified in looking forward to many a happy hour in the future under like conditions.

On this day in 1899, ground was broken for Boston's Symphony Hall. From the day it was completed a year and a half later, the building would be considered one of finest concert halls in the world. The hall was designed by the famous New York firm of McKim, Mead, and White as a new home for the 20-year-old Boston Symphony Orchestra. The architects hired a Harvard physicist to advise them on the shape of the walls, the arrangement of the seats, the stage angles, and the building materials that would produce the best acoustics. In more than a century of use, Symphony Hall has hosted classical musicians, jazz masters, folk singers, and youth concerts, in addition to the regular seasons of the BSO and the Boston Pops. 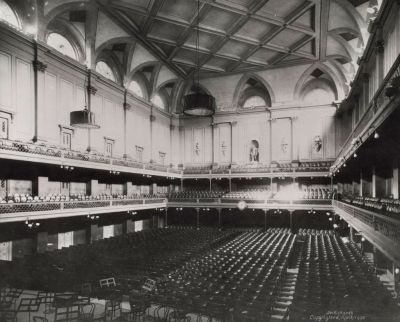 Symphony Hall was not Boston's first home for classical music. In 1852 a citizens' association led by a public-spirited physician named Jabez Baxter Upham commissioned the building of the Old Boston Music Hall. Located just off the Common, the hall was equipped with an extraordinary organ and quickly became a favorite venue for musical events. In 1880 Boston financier and ardent music lover Henry Higginson founded the Boston Symphony Orchestra — one of the oldest and finest orchestras in America.

For the next 20 years, the BSO performed at the Old Boston Music Hall. Higginson was a man of means and an active social and cultural philanthropist. A veteran of the Civil War, he considered himself a "practical idealist," and his efforts to be a useful citizen benefited many civic and cultural organizations. When a trolley and subway building project threatened the Old Boston Music Hall, few were surprised that Higginson stepped in. In 1893 he formed a corporation to finance a new and permanent home for the Boston Symphony Orchestra. Higginson himself purchased the land for a new Boston Music Hall, later named Symphony Hall.

After the June 12th groundbreaking, work proceeded quickly; the hall was completed in less than 17 months for a cost of $771,000. Symphony Hall opened on October 15th with an an inaugural gala and the BSO's first performance in its new home.

When a trolley and subway building project threatened the Old Boston Music Hall, few were surprised that Higginson stepped in. 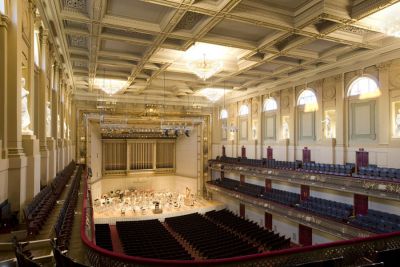 Audiences and critics were thrilled both by how the hall looked and how it sounded. The Boston Globe proclaimed the hall to be "perfect in all requirements." No one disagreed. Modeled on two of the top concert halls in the world — the Gewandlhaus in Leipzieg, Germany, and Boston's own Music Hall — the building was beautiful. But the acoustics were even more impressive than the aesthetics. Symphony Hall was the first concert hall in the world to have scientifically designed acoustics.

The architects hired Wallace Clement Sabine, a young physics professor at Harvard, to serve as their acoustical consultant. Sabine made sure that the auditorium was designed according to scientifically derived acoustical principles. Working with formulas to achieve proper reverberation times, he selected an optimal shape for the hall, dictated the slope of the walls, ceilings, and floors, and incorporated design elements — such as the recesses in the coffered ceiling and the statue-filled niches — to distribute sound. Thanks to those acoustical innovations, Symphony Hall has remained one of the finest concert halls in the world for over a hundred years.

Modeled on two of the top concert halls in the world — the Gewandlhaus in Leipzieg, Germany, and Boston's own Music Hall — the building was beautiful.

Today's concert-goers might notice several of the hall's quirks. The proscenium arch is ringed with plaques; except for one, they are all blank. They were intended to be inscribed with the names of great composers, but during construction the directors were unanimous that only Beethoven deserved such a honor. No names have ever been engraved on the other plaques. The architects initially planned to put the main entrance on Huntington Avenue; the banister on the stairs on that side of the building is carved with the initials "BMH." Only those who know their BSO history recognize that the initials stand for "Boston Music Hall," the BSO's first home and the name originally intended for Symphony Hall.

Symphony Hall has long been the venue of choice for a variety of performers. In the 1910s and 1920s, the controversial modern dancer Isadora Duncan filled the hall. While the legendary African-American contralto Marian Anderson was banned from other concert halls, she sang at Symphony Hall from the 1930s to the 1960s. Famed explorers Richard Byrd and Ernest Shackelton gave illustrated lectures there. Jazz greats such as Ella Fitzgerald and Louis Armstrong and folk legends such as James Taylor, Joan Baez, and Joni Mitchell have performed at Symphony Hall.

In 2006, for the first time in 106 years, the stage floor at Symphony Hall was replaced. Because, as the BSO's managing director told a reporter, "you can't improve on it," workers used the same maple boards, the same nails (made by the same company), the same felt, and the same hand tools used to lay the original floor.

Because, as the BSO's managing director told a reporter, "you can't improve on it," workers used the same maple boards, the same nails (made by the same company), the same felt, and the same hand tools used to lay the original floor.

Symphony Hall is at the corner of Massachusetts and Huntington Avenues.