After forty-eight hours of intense anxiety, wild commotion, and scenes of almost indescribable destruction, the city has returned to nearly its normal state, save in the burnt district, where the ruins still smolder and will remain for some time solemn monuments of the ruin a night has wrought. The stranger arriving in Boston this afternoon, and keeping in that portion of the city west and north of Tremont Street, would not know from anything he saw or heard, that a great calamity had befallen the city. . . . It is not meant that the city had, even in its perfect portions, retained its usual aspect, but only to assert that Boston, though scarred deeply, is not destroyed, and that her people are not cast down. . . . Yet it is undoubtedly true that the city has been visited by a calamity rarely paralleled in the history of ravages by fire. . . . It is now found that the burned district comprises within a fraction of sixty acres, or 2,610,000 square feet [including] the most massive and magnificent business structures in America, and which now present only smoking, shapeless ruins of what was apparently indestructible.

I was wondering about the reference to Boston's Trinity Church as one of the buildings that was rebuilt as a result of the 1872 fire. The current Trinity Church is in Copley Square, well outside the downtown area that burned - so did it replace an earlier downtown church? It's also interesting to think about the fate of the Old South Meeting House, which was at the very edge of the burned area and which, as you note, was saved from the flames. The congregation constructed a much newer and larger building between 1872 and 1875, also in Copley Square, which was then the more fashionable and up-and-coming part of the city. The old meeting house was actually scheduled for demolition, and although I don't know much about this specific case, I'm guessing that this was part of the general push toward rebuilding and modernization that was prevalent in the downtown after the Great Fire. One of the country's first (maybe *the* first?) preservation battles was fought over the site, which was eventually saved and opened as a museum in 1877. So there are interesting echoes in this story of the debates a century later over urban renewal, adaptive reuse of old buildings, and economic viability of old downtowns.
Two church-related comments

The original Trinity Church was built on land donated in 1728 by wealthy Anglican Leonard Vassall; its cornerstone was laid in 1734. That church was destroyed in the Great Fire of 1772 and Richardson's Trinity Church replaced it. Thank you for your interesting comments on the preservation of the Old South Church and the role of the Great Fire in fostering the urban renewal/adaptive reuse debate.
Two church-related comments

My grandfather John Francis Matthews was born in Boston night of the fire, nov 9 1872. Parents were, William J. Matthews and Mary Anne Lynch Matthews. He was featured in a later issue of a Boston Paper. To my knowledge he was the only child born that night in Boston.
NH Fire Engine

A self-propelled steam pumper made its way from New Hampshire over the road and was able to use high pressure streams of water to knock down burning walls. If memory serves me at age 74, I believe it was built by the Amoskeag Locomotive Works ------------------------- Joseph E. de Vicq Living in Texas with his heart back in the Bay State.
Login

On this day in 1872, a monstrous fire nearly destroyed Boston's business district, ravaging the city from the Common to the waterfront. Beginning in a dry goods store, the blaze burned for 15 hours with a heat so intense that it created its own roaring wind. Flames spread relentlessly from one wooden roof to the next, melting whole blocks of granite stores and warehouses into superheated rubble. Firefighters from dozens of towns fought the blaze, but they lacked enough water pressure to halt the inferno. Finally, officials resorted to blowing up buildings to keep the fire from spreading to residential areas. The blaze reduced 65 acres of commercial property — almost 1,000 businesses — to ruins. Within two years, a new city would arise from the ashes.

Chief Damrell successfully lobbied for the first fireboat and won the right to make building inspections. 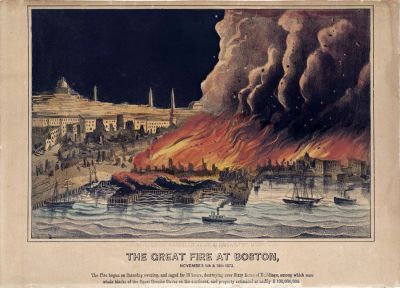 In the autumn of 1872, Boston's fire chief John Damrell was worried. As a young man, he had been a volunteer firefighter in his North End neighborhood. His dedication and openness to innovation earned him an appointment as a professional fire engineer in 1858 at the age of 30. By 1866, Damrell had taken over as Boston's chief engineer and had embarked on a campaign to modernize fire safety in the city. He successfully lobbied for the first fireboat and won the right to make building inspections. But he worried that these steps would not be enough to protect Boston, with its narrow, crooked streets increasingly crowded with new buildings, from a catastrophic fire.

The city's services, he insisted, had not kept pace with its growth. He was particularly concerned about antiquated and corroded water pipes that could not produce enough pressure to reach the top floors of newer buildings. But the city councilors thought his request to install new water mains was extravagant, and they rebuffed him.

In 1871, when Chicago suffered its Great Fire, Damrell traveled to the Windy City to see what he could learn from the disaster. He came home convinced that Boston was at risk. One year later, a virulent form of horse distemper sidelined the fire department's specially trained horses, only increasing Damrell's worries. He acted quickly, ordering his men to return to the age-old practice of pulling their engines to fires and hiring 500 extra men to help with the effort.

Curious spectators assumed that someone else had alerted the fire department; they watched the blaze for 20 crucial minutes before an alarm was sounded.

It was only a matter of time before Damrell's worst fears were realized. Around 7:00 pm on November 9, 1872, a spark of undetermined origin ignited highly flammable material in the basement of a wholesale dry goods store at the corner of Kingston and Summer Streets. When flames reached the wooden elevator shaft, they quickly rushed up through floors crammed with flammable rolls of cloth, hosiery, gloves, laces, and hoop skirts and set the building's wooden roof ablaze.

Curious spectators assumed that someone else had alerted the fire department; they watched the blaze for 20 crucial minutes before an alarm was sounded. Two engines responded and immediately gave a second and third alarm. By 7:45, every fire company in the city had been called; they all arrived pulling their engines by hand. But it was too late.

The flames leapt from one wooden roof to another in the crowded commercial district. Within minutes whole blocks were consumed by fire. Roaring like a blast furnace, it seemed to take on a life of its own. Intense heat created howling updrafts; wind and fire forced the firemen back. The weak streams of water that the firefighters valiantly pumped into the inferno did little to stop its progress. Broken gas lamps flared like rockets, explosions blew off manhole covers. Late into the night, the city glowed as bright as day.

Gawkers — by some counts as many as 100,000, many of them drunk — added to the firefighters' struggle.

The desperate fight was soon complicated by mobs of frenzied businessmen trying to salvage their wares and ledgers, looters eager to grab what they could, and hordes of curious onlookers. Since the fire was not threatening residential areas, many Bostonians viewed the blaze as an awesome spectacle. Gawkers — by some counts as many as 100,000, many of them drunk — added to the firefighters' struggle.

But struggle they did. For over 15 hours, nearly 1,700 firemen from 27 different towns — some as far away as New Haven and Providence — pumped weak streams of water on the blaze. They had some victories; they saved the Old South Church and kept the blaze away from the Common. But mostly they battled in vain as flames raced down to the waterfront and consumed boats in the harbor. Finally, town officials persuaded an exhausted Damrell to use his weapon of last resort: explosives. Under pressure from the mayor and the city's postmaster general, a reluctant Damrell agreed to blow up blocks of buildings to rob the fire of fuel. While the tactic was effective, it was the source of controversy later.

Under pressure from the mayor and the city's postmaster general, a reluctant Damrell agreed to blow up blocks of buildings to rob the fire of fuel.

By the end, nearly 800 buildings, most of brick, granite, or stone, in the city's commercial and warehouse districts lay in ruins. Total damage was estimated at $75,000,000 (over one billion in today's dollars). Twelve firefighters perished; altogether 30 people died.

Rubble from the gutted buildings was dumped in the harbor to fill in Atlantic Avenue. Many businessmen had enough insurance to begin rebuilding right away. New structures were required to meet stricter building codes. Some of the buildings that arose from the ashes — such as Trinity Church —are considered to be among the city's architectural jewels.

One of the casualties of the fire was Chief Damrell's career. Despite his warnings and the fact that his courage and foresight undoubtedly saved many lives, officials held him responsible for the disaster. In 1874 he lost his job as chief engineer. That year, the city finally overhauled its water mains. John Damrell went on to lead a campaign for a national building code.

It Happened in Massachusetts, by Larry B. Fletcher (Globe Pequot Press, 1999).

Boston on Fire: A History of Fires and Firefighting in Boston, by Stephanie Schorow (Commonwealth Editions, 2003).

On this day in 1980, fire destroyed the original Legal Sea Foods fish market and restaurant in Cambridge. The restaurant re-opened, but the business soon outgrew the neighborhood. Today there are 30 family-owned Legal Sea...