Those who knew Melnea Cass well noticed that she seemed to be more weary in recent years. Her step was a little heavier than before, she had to sit and rest more frequently, and she was more tired after a long day of endless meetings. But we knew she would never quit. The woman who had worked for the improvement of her community for almost 60 years would never retire. She was on call right up to the end.

Last Saturday, at the age of 82, all earthly burdens fell from her shoulders and she slipped away for a well-deserved rest. Certainly the heavenly chorus must have intoned at the moment she passed on, "Well done!"

Melnea Cass held such an exalted position of respect in the Community that it is easy to forget that all the honors came in the last 15 years of a very long life. Before that she worked for over 40 years without much thanks or recognition until past the age when most people retire. But she never stopped…

Melnea Cass was the mother of perseverance. She could work for decades on projects that brought no headlines. Her only interest was to help where she could; she was prepared to stay at the task for 40 years if necessary. One example is her work with the Equal Rights League (ERL). Few now remember, but that was the organization founded by William Monroe Trotter. For the past 20 years Melnea Cass has held annual commemorations of Crispus Attucks and Frederick Douglass in the name of the ERL so that we never forget our history.

The most important lesson Mrs. Cass taught us was love. Her abiding goodwill permeated everything she did. Even her adversaries would come away feeling good. Problems and hostilities would melt when faced with the force of her love.

On this day in 1968, Governor John Volpe dedicated the Melnea Cass Swimming and Skating Rink in Roxbury. The new facility was intended to improve life in Boston's urban neighborhoods. It was named for a woman who had dedicated her life to the same cause. Melnea Cass had spent nearly half a century working for economic and racial justice. Admired for her selflessness, common sense, and generosity, she was respected by the city's power brokers as a forceful and effective advocate for social change. When she died in 1978, Mrs. Cass had received honorary doctorates and been named "Massachusetts Mother of the Year" and a "Grand Bostonian." The honors did not end with her death. Melnea Cass Boulevard in Lower Roxbury opened in the summer of 1981.

Northeastern University, Simmons College, and Boston College all granted her honorary degrees, so that friends took to calling her "Dr. Cass." 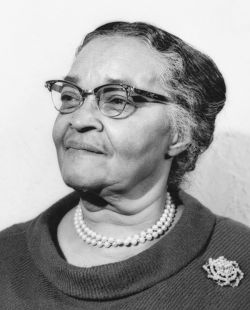 When a young black woman graduated as valedictorian of her high school class in 1914, she had what should have been a simple goal: to become a salesgirl at a Boston department store. But Melnea Jones soon found that there were no opportunities of this sort for a black woman. She took a job as a domestic worker and resolved to dedicate her life to the struggle for racial justice.

She was born in Richmond, Virginia, in 1896, the daughter of a janitor and a domestic worker. Growing up in the South, her father was lucky to get a fourth- or fifth-grade education, but he wanted more for his daughters. When Melnea was five years old, he moved his family to Boston in search of greater economic and educational opportunities. Melnea and her two sisters entered the Boston Public Schools.

Only three years later, Melnea's mother died; an aunt "stepped in like a mother" and took the girls with her to Newburyport where they continued their schooling. Recognizing that Melnea was a gifted student, her aunt found the money to send her to a private Catholic school that had been established for black and Indian girls in Rock Castle, Virginia. In 1914 Melnea graduated at the top of her class.

Her motto was: "If we cannot do great things, we can do small things in a great way."

After working as a domestic for three years, she married Marshall Cass. While her new husband fought in World War I, Melnea lived with his mother, a vibrant woman known for her civic work in Boston. With her mother-in-law's encouragement, Melnea Cass became an active suffragist. When the Nineteenth Amendment to the Constitution was passed in 1920, Cass organized black women to cast their first votes.

She was profoundly influenced by William Monroe Trotter, Boston's most militant civil rights activist. She attended his lectures and protest meetings and read The Guardian, the newspaper Trotter established in 1901. Early in her marriage, she joined the NAACP and was as active in the organization as possible given that she had three young children. These early experiences laid the groundwork for the battles she would later wage to end discrimination in education, business, healthcare, and social services.

In the 1920s, the Cass family moved to Roxbury. With her husband's support, Melnea Cass began what would be a long career as a volunteer community activist. She founded a mothers' group that pushed for the establishment of neighborhood nursery schools. She joined and led a variety of service organizations through the Massachusetts Union of Women's Clubs. Her motto was: "If we cannot do great things, we can do small things in a great way." Her neighbors in Roxbury soon knew that if they had a problem, they could tell Melnea Cass about it and she would try to solve it. People began to call her "the Mother of Roxbury" and "the First Lady of Roxbury."

As early as 1933, she participated in protests against Boston department stores that refused to hire blacks; the next year she demonstrated to force Boston City Hospital to hire black doctors and nurses.

After World War II, Melnea Cass's activities and influence reached beyond Roxbury. She was appointed to public agencies and boards responsible for the welfare of the city's poor. She was a charter member of Action for Boston Community Development (ABCD), which helped people displaced by urban renewal. For ten years she served on the Board of Overseers of Public Welfare, advising the mayor on ways to provide services and support for the city's poor.

While Cass worked to ameliorate poverty, she continued to fight racism. As early as 1933, she participated in protests against Boston department stores that refused to hire blacks; the next year she demonstrated to force Boston City Hospital to hire black doctors and nurses. In 1951 she resigned from the board of the Boston YWCA because of its discriminatory practices.

All of these experiences prepared her for another battle. As president of the Boston branch of the NAACP from 1962 to 1964, she helped organize demonstrations against the Boston School Committee's policy of segregation. Under her leadership, the NAACP generated controversy by staging sit-ins and calling for improved educational opportunities for black students in the city's public schools.

"The Holy Word asked, 'who can find a virtuous woman?' We have found her — in a modestly furnished third-floor walk up tenement flat on Harold St. in Roxbury, Massachusetts . . ."

In 1966 Mayor John Collins recognized Cass's decades of volunteer service by proclaiming May 22nd "Melnea Cass Day" in Boston. More than 2,000 people attended the celebration. Two years later, when the state built a new swimming pool and skating rink in Roxbury, it was named in her honor. Northeastern University, Simmons College, and Boston College all granted her honorary degrees, so that friends took to calling her "Dr. Cass."

Melnea Cass died in December of 1978. In his eulogy, the Rev. Michael Haynes said, "The Holy Word asked, 'who can find a virtuous woman?' We have found her — in a modestly furnished third-floor walk up tenement flat on Harold St. in Roxbury, Massachusetts, where a beautiful, radiant, strong, courageous, generous, God-loving Christian black woman named Melnea A. Cass held court around a quaint, old-fashioned dining room table."

Researchers interested in Melnea Cass can view a collection of her papers at the Northeastern University Library.

On this day in 1915 Boston's African American community protested the showing of the racist film The Birth of a Nation. When 800 black women gathered at a Baptist church, one speaker suggested that "if...

On this day in 1968, hundreds of demonstrators occupied a parking lot in Boston's South End. Houses on the site had recently been demolished, and their occupants displaced. To protest this kind of "urban renewal,"...