Ten years ago, 14 years old and walking down Boylston Street, Ben Affleck looked up to this hotel suite. He saw the sky reflecting on a span of shiny windows, and he imagined the glittery lives being lived inside them. He did not see his own future.

Today, feet resting on a coffee table, Affleck sits tentatively within the cushiony confines of that suite. As Bostonians walk along the Public Garden below, Affleck laughs warmly at the good fortune that has brought him among those who receive room service and valet.. . .

He smiles at the thought that, at least for this visit, he doesn't need to use the foldout couch at his mother's Central Square home. "I really feel like the luckiest man alive," Affleck says. "What can you say when what happens in your life exceeds what you thought was possible? If someone asked me years ago, `What's your dream?' I'd have said, `I would like to be in a movie that I wrote with my best friend that was directed by Gus Van Sant and stars Robin Williams.' It ranks up there with `I'd like to be able to fly' or `I'd like to have 7 billion dollars.' "

. . . Affleck is surprisingly passionate about filming locally, and he smiles at how stubborn he and Damon were on the issue. "We became known as the two guys who were fixated on Boston. . . .

Affleck feels that Boston itself plays a character in "Good Will Hunting,". . . "So much of what we want to do is present Boston the way we knew it growing up here. Because we feel like it has never really been done. Everything from the dialect to the specific kinds of culture, the way people live. It's very particular, and interesting, especially at a time when so much of the country is becoming generic. . . . Boston is still a place that has its own identity, its own flavor. Often when that's attempted in the movies it comes off as either caricature or cutesy. . . "

Affleck says his "closest friends in the world" are those he made growing up. Many of them still live in the Boston area, as does his girlfriend,. . . He was thrilled they attended a recent advance screening of "Chasing Amy," he says. "It didn't feel like I'd really done anything until my friends saw it, you know? Then it felt like an achievement. . . .

Affleck says that if he makes it big time, and loses his freedom to the rigors of being famous in America, he won't have regrets. "If it happened to me, I'd certainly consider myself very, very lucky and just accept the downside with it. Because no matter which way you look at it, it's a whole hell of a lot better than laying brick for a living."

On this day in 1997, Miramax released "Good Will Hunting," a movie about the collision of two Boston-area cultures: the heady, prestigious world of Cambridge academia and the proud but gritty working-class brotherhood of South Boston. Local boys Matt Damon and Ben Affleck had written the screenplay to create leading roles for themselves; with the movie's smash-hit success they became Hollywood's newest stars. The screenplay was first picked up by another studio, but when Affleck and Damon learned that it would not be filmed in Boston, they canceled the deal. Miramax recognized that the Boston setting was essential to the story and agreed to film on site. "Good Will Hunting" is one in a long line of movie hits in which Massachusetts has played a role.

When Damon landed a part in the Old West epic "Geronimo," he dropped out of Harvard, 12 credits shy of graduating, and headed to Hollywood and a reunion with Ben Affleck. 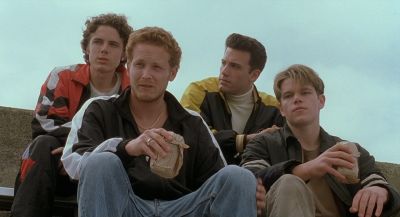 To most moviegoers, it seemed as if Matt Damon and Ben Affleck burst suddenly onto the Hollywood scene and achieved instant celebrity. The story line was irresistible: childhood buddies, both struggling actors, write a screenplay, for which they will win an Oscar. A Hollywood studio picks up the project and casts the writer/actors in starring roles. The film is a commercial and critical success, and the two young men are suddenly on Hollywood's "A List" and the cover of countless magazines.

In reality, Damon and Affleck's success came after 20 years of friendship, hard work, connections, and persistence. Growing up in Cambridge and living two blocks from one other, they were best friends from the time they were in elementary school. They shared a passion for baseball, Dungeons and Dragons, and movies. Both were active members of the high school drama club, and both dreamed of becoming professional actors. When they got parts in commercials, they took the money they made and opened a joint bank account to fund audition expenses.

Growing up in Cambridge and living two blocks from one other, they were best friends from the time they were in elementary school.

Affleck had a head start on Damon. Affleck, Sr. was an actor and director who had worked in Hollywood before moving his family east to join the Theatre Company of Boston when Ben was a baby. His father's connections helped Ben land parts in commercials and educational TV programs while he was still in grade school. Matt Damon, on the other hand, had to persuade his investment-banker father and educator mother to take his acting dreams seriously. A straight-A student, he took acting lessons and worked hard to master his craft. By the time he was 16 he was ready to leave school and, with his friend Affleck, try his luck in New York City. His disapproving parents refused to pay for the trip, so Damon used funds from his joint account with Affleck.

In New York, Affleck introduced Damon to his agent. Damon's movie career began when he was cast in the hit film "Mystic Pizza." But his beginner's luck did not last. While Ben Affleck moved to Hollywood, Matt Damon went home to Cambridge and entered Harvard College. He threw himself into his studies but kept feelers out for movie roles. When he landed a part in the Old West epic "Geronimo," he dropped out of Harvard, 12 credits shy of graduating, and headed to Hollywood and a reunion with Ben Affleck.

. . . as one local noted, "the clothing was right, the way they acted, the accents, the cars they drove."

Before long, their careers were again stuck in neutral. Damon had written a screenplay at Harvard. He and Affleck reworked it and began shopping it around Hollywood. In 1992, Castle Rock Entertainment bought it, but the deal fell through. The producers wanted to save money by filming some place other than Boston and to cast better-known actors than Affleck and Damon in the leading roles. Using his father's connections, Affleck approached Harvey Weinstein, the head of Miramax. Weinstein loved the story. He agreed to film on location in Boston and to cast the screenwriters as the leads. Filming began in the spring of 1997; by Christmas, both Matt Damon and Ben Affleck were stars.

A box office hit, "Good Will Hunting" grossed nearly $140,000,000. The movie was especially popular in Boston. People from Southie credited the film with capturing the fiercely loyal, quick-witted, sometimes violent character of their neighborhood. Dozens of residents were cast as extras, so that, as one local noted, "the clothing was right, the way they acted, the accents, the cars they drove." There is some irony in the fact that the movie won praise for its accurate depiction of South Boston. It works, one critic wrote, partly because the writers knew the worlds they were depicting so well. Because Ben Affleck and Matt Damon grew up in the shadow of MIT, they had to imagine life in the tight-knit working class community of South Boston.

"Good Will Hunting" was just the beginning of Boston's rise as a film location, both starring itself and standing in for other cities.

On this day in 1993, the sitcom "Cheers" aired its 275th and final episode. One of the most popular shows in television history, "Cheers" was set in a bar modeled on the Bull and Finch...

On this day in 1918, Louis B. Mayer traveled from his Boston office to New York City for the premiere of his first movie release, the silent film Virtuous Wives. A decade earlier, Mayer had...