For 300 hundred years Gloucester men have gone down to the sea in ships and have done business upon the great waters. They have made our fishing industry an honourable calling. What manner of men were they, these men who year after year of the history of Gloucester who from the very beginning have sailed from our harbor over the wide courses of the ocean, have fished upon the Banks, have endured the hardships of the seasons, have returned with varying cargoes, sometimes successful, sometimes unsuccessful, - have weathered the gales, have been shipwrecked and finally on the last voyage have gone to their eternal sleep on the bed of the ocean? Since 1623 they have come to Gloucester from the countries of the world, from east and west, from north and south, kindred spirits – venturesome, hardy and courageous. They came to Gloucester as strangers and they learned to call it home. From all lands they came, as if drawn by a magnet, men of different races, nationalities, customs and tongues. Always retaining their individualities, they became one in purpose.

Quoted in The Book of the Three Hundredth Anniversary Observance of the Foundation of the Massachusetts Bay Colony at Cape Ann in 1623 and the Fiftieth Anniversary of the Incorporation of Gloucester as a City 1924, ed. by James R. Pringle (n.p.)

On this day in 1906, Slade Gorton and Company of Gloucester stunned the fishing industry by announcing that it would merge with three other local fishing companies. With a fleet of 55 vessels, mostly sleek and speedy schooners, the new business occupied 15 wharves and employed thousands of workers in Gloucester. Nearly bankrupted when the Italian government failed to pay for a million dollar shipment of salt cod in 1923, Gorton's rebounded by entering the growing market for frozen fish. Today it is one of the largest seafood suppliers in the world. Although the company maintains its ties to Gloucester, none of the fish that it sells is now landed or processed in the historic fishing port.

During the heyday of the fishing schooner in the 1880s, Gloucester had a fleet of 400-500 sailing vessels. 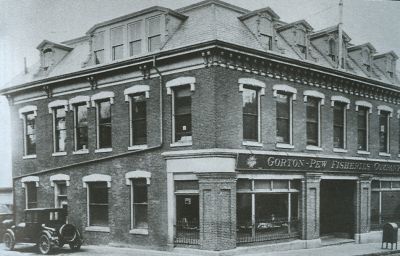 Unlike most of the early English settlements in the Massachusetts Bay Colony, Gloucester was not founded by farmers; it was, from the first, a town of fishermen. Thus signs at the edge of town welcome you to "America's oldest fishing port."

The French explorer Samuel de Champlain reported on the bounty of the local waters in 1606, and several years later Captain John Smith filled his ship's hold with cod and his letters with glowing reports of the profitable fishing grounds off Cape Ann.

Reports of the seemingly inexhaustible supply of easy-to-catch fish reached European merchants, and in 1623 two competing English companies sent fishermen, fish salters, and a ship's carpenter to harvest cod off Cape Ann. From that day to the present, Gloucester's history has been inextricably bound up with the legends, exploits, and tragedies of commercial fishing.

Early Gloucester fishermen used small wooden boats and stayed close to shore. By the early 1700s more venturesome fishermen realized that their catches would be much greater if they could reach the rich fishing grounds of Georges Bank, southeast of Gloucester.

Boat builders experimented, and in 1713 they launched the first schooner from Eastern Point in Gloucester. This sleek, two-masted vessel revolutionized the fishing industry. With a name that comes from the old New England word "scoon," meaning "to skim lightly along the water," the new design reduced sailing time between Gloucester and Georges Bank. The town's fleet increased its catch dramatically.

Writers romanticized life aboard the schooners, and it could be thrilling indeed when the winds were good and the seas quiet . . .

On the eve of the Revolution, 75 fishing schooners called the port of Gloucester home. Gloucester ships sailed for the West Indies loaded with salt cod to feed slaves laboring on sugar plantations; on the return voyage, the crew packed holds full of rum, molasses, and cane sugar. One historian has written that "when this lucrative trade was impeded by the British during the War of 1812, local captains simply left port on moonless nights and sailed smaller boats."

By the mid-nineteenth century Gloucester's fishing industry was the largest of any port in America and the second largest in the world. During the heyday of the fishing schooner in the 1880s, Gloucester had a fleet of 400-500 sailing vessels. Local lore has it that you could walk all the way across the harbor without getting your feet wet.

Writers romanticized life aboard the schooners, and it could be thrilling indeed when the winds were good and the seas quiet and the vessel skimmed across the water. But the waters of Georges Bank are notoriously rough and unpredictable. The slim, built-for-speed hull of a schooner offered little refuge in an Atlantic storm. Men who shipped out on Gloucester's schooners left behind many soon-to-be widows. Stories of Gloucester's fishermen who did not return added to the seaport's lore.

The glory days of Gloucester fishing came in the second half of the nineteenth century. The key figure in the city's success was a man who became a fisherman only accidentally. Slade Gorton started his work life as a mill worker in a Rhode Island textile factory; by the time he was in his twenties, he had been made an overseer. He moved to Rockport, took a job as overseer of the Annisquam Cotton Mill, married and raised a family. He might have spent his entire career there, had a tragic fire and an energetic wife not intervened.

"We are now in the fish business."

In 1883 the Annisquam Cotton Mill burned to the ground. At 51, the unemployed Gorton tried to help out his wife, who ran a boarding house for mill workers, by catching and packaging fish for her to salt, smoke, and serve. According to Gorton legend, his wife took the next step. With the money she had saved from running the boarding house, she bought a fishing boat, rented Rockport's now famous Motif #1 for a shop, and announced to her husband, "We are now in the fish business."

The Gortons' sons joined the business and suggested innovations that would give them a competitive advantage. The younger Gortons invested in advertising, putting up billboards along railroad tracks in an effort to make Gorton's a household name. They also introduced the idea of packing boneless codfish in one-pound wooden boxes. Salted cod, mackerel, and codfish cakes, packed in the company's signature black-and-white boxes, became some of the first convenience food. The innovation was soon an American tradition.

On March 31, 1906 the people of Cape Ann were stunned by the news that Gorton's would merge with three other Gloucester fish companies. Formally known as Gorton-Pew, but generally called "Gorton's," the new company would become the largest fishing business on the Atlantic Coast. Over 1,000 fishermen manned 55 vessels; another 1,000 men and women worked on shore salting, drying, boning, cutting, grinding, smoking, and packaging millions of pound of fish.

In 1923 Gorton-Pew nearly went bankrupt. The Italian government purchased more than $1,000,000 worth of salt cod from the company. Gorton filled the order, but while the fish was en route to Europe, the dictator Benito Mussolini seized power in Italy. He ordered the salt fish cargo confiscated. Faced with this massive unpaid debt, Gorton's was saved only by the timely arrival of a new technology.

". . . fish sticks, it can be truthfully said, have greatly increased the demand for fish, while revolutionizing the fishing industry."

Clarence Birdseye arrived in Gloucester in 1924 with a technique for quick-freezing fish. Gorton's sought Birdseye's help to expand into the frozen fish market. Over the next few years, frozen fish sticks, packed in a family-size box bearing the Gorton logo of a fisherman in a yellow sou'wester, became a familiar item in American households. A 1950s advertisement touted their virtues: "Easy to prepare, thrifty to serve, and delicious to eat, fish sticks, it can be truthfully said, have greatly increased the demand for fish, while revolutionizing the fishing industry."

In first quarter of the twentieth century, the beautiful sailing schooners gave way to fishing boats powered by engines. Even with their greater size and stability, the boats were limited by the length of time they could keep fish fresh before returning to port. Gorton's and other large companies invested in factory ships, which could process 4,000 tons of fish while still at sea. Eventually Gorton's gave up its Gloucester-based fleet. The huge factory ships simply follow the fish.Today, Gorton's is among the top ten seafood suppliers in North America.

Gloucester is 30 miles northeast of Boston. The city maintains a seasonal Visitor Center in Fort Stage Park on the harbor.

The Cape Ann Historical Museum, located in downtown Gloucester, has several galleries devoted to the history and art of the region's fishing industry.

MIT: The Center for Marine Social Sciences Gorton's: Our Story

The Last Fish Tale: The Fate of the Atlantic and Survival in Gloucester, America's Oldest Fishing Port and Most Original Town, by Mark Kurlansky (Random House, 2008).

Cod: A Biography of the Fish that Changed the World, by Mark Kurlansky (Walker and Company, 1997).