These preliminary remarks will introduce the general plan of THE BOSTON DAILY GLOBE, showing its peculiar purposes...

The columns of THE GLOBE will be devoted to the intelligent and dignified discussion of political and social ethics and current events at home and abroad, with a minute and careful review of commercial and financial matters, and a comprehensive report of the various markets of the world. The fine arts -- music and the drama, sculpture and painting, with all important new books, will receive ample and judicious attention from experienced individuals. Its correspondence will be a marked feature of the paper, and will be conducted by able and responsible persons, stationed at the most important points in Europe and America, and thorough whom we design to impart a special interest and value to these columns. The well-digested purpose is to produce a first-class national journal, and though the consideration of local matters will ever form a prominent feature of THE GLOBE, yet its scope is designed to impart universal interests by the temperate and intelligent discussion of such subjects as demand the consideration of the great mass of the people. To accomplish these ends, its editorial corps has been carefully selected and embraces such varied ability as will render its daily issues, in this respect, second to no newspaper in the country...

- The steamship Japan sailed on Friday from San Francisco with $1,433,000 in specie;

- Kansas has abolished the death penalty for murder, reserving it only for horse thieves under the jurisdiction of Judge Lynch;

- Minority representation is approved under the Utah Constitutional Convention; that's to give husbands a chance of making themselves heard;

- There is a party of Japanese, consisting of seven men, now stopping at the St. James Hotel in this city;

- Our correspondent writes us from Washington that there is an average of 1,000 patents granted monthly by the Patent Office at the present time;

- An apothecary's clerk delivered a fatal dose by mistake in New York last Friday. There are few more responsible positions than that of a dispense of physicians' prescriptions;

- A passenger by the Pacific Railroad who arrived in Boston yesterday, and who understands these matters, expressed grave doubts about running these cars in winter...

... - Over one million children, it is said, attend the public schools in the New England states, a most encouraging statement...

- Spanish mackerel, considered a game fish, and as belonging exclusively to southern waters, are now nearly as common here as elsewhere:

- Canadians, for some unknown reason, are leaving the Dominion in considerable numbers and are settling on this side of the line.

- Nearly two thousand men, women, and girls are employed in the paper collar factories of Massachusetts;

- There is a dairy at Montpelier, Vermont where they do the churning by steam power;….

Boston Newsapers of the Fifties

I can remember when Boston had three major papers for both morning and evening with the Record, Globe, and Herald in the morning, and the American, Traveler, and Evening Globe in late afternoon. The Sunrise edition of the Record, which we would get up in New Hampshire, had the red sunrises splashed across the top of the front and back page of the tabloid. My father spoke fondly of the Boston Transcript, which he remembered from years earlier and I'm sure that some readers may remember it and other. Dwight
Ownership update

On this day in 1872, a brand-new newspaper hit the streets of Boston. Costing four cents, the Globe had twice the number of pages as most competitors for the same price. But even at a bargain price, the "semi-literary" paper with reports on Sunday church sermons, art exhibits, and new books attracted few readers. Within a year, only one of the six original investors remained— Eben Jordan, founder of the Jordan Marsh Department Store. Believing the paper could be a commercial success, he hired Charles H. Taylor to make it into one. With financial backing from Jordan and the ability to respond to changing trends, Taylor turned the paper around. By the 1890s, it had become the dominant paper in New England.

He introduced cartoon illustrations to the Globe and the first-ever full-page ads—for Jordan Marsh, of course. 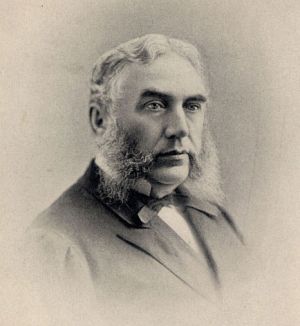 On a February evening in 1872, six wealthy Bostonians gathered to plan a new commercial and cultural venture. The group included men from old Boston families, Harvard professors, and successful businessmen. Besides their wealth and social standing, they had a common goal. They wanted to establish a newspaper "of the first class."

It was not that Boston lacked newspapers. On the contrary, there were ten competing papers in the city. However, none of them, including The Herald, which accounted for half of all the papers sold in Boston, was satisfactory to these gentlemen. They proposed to combine their money, reputations, and experience to launch a new paper that would be both enlightening and profitable. In less than a year, they failed at both.

The first edition of the new Boston Daily Globe appeared on March 4, 1872. The Globe's inaugural editorial promised "intelligent and dignified discussion of political and social ethics" with "ample and judicious attention" to literature and the arts. On Mondays, the front page included "The Sunday Pulpit," a review of sermons delivered in area churches. There were notices of art exhibitions and theater openings and a column called "New Publications."

The new "semi-literary" newspaper was a dismal failure; circulation rarely exceeded 5,000. Within a year, most of the capital was gone; so too were the editor and all but one of the original investors.

The Globe's inaugural editorial promised "intelligent and dignified discussion of political and social ethics" with "ample and judicious attention" to literature and the arts.

The man who stayed—and who saved the fledgling Globe—was Eben Jordan. He had already turned an old-fashioned dry goods business into a world-class department store by introducing innovations and catering to his clientèle. He had not lost faith that the paper could be commercially successful. All he needed was the right manager. In Charles H. Taylor he found his man.

Although not yet 30, Charles Taylor had already distinguished himself as an army officer, printer, journalist, publisher, and politician. Now the Charlestown native brought to the Globe his energy, imagination, and understanding of the changing tastes of Boston readers. With Jordan's backing, he began to transform the paper.

The challenge was daunting. In 1872 the city had suffered a devastating fire, followed by a financial panic and an economic depression. Taylor knew he had to increase circulation in spite of the hard times. His first goal was to get the paper noticed. He advertised and promoted it relentlessly and staged publicity stunts. For example, he once published a review of French literature entirely in French. He marked the centennial of the revolution by running the paper's first illustrations—woodcuts of Patriot heroes, historic buildings, and maps. He introduced cartoon illustrations to the Globe and the first-ever full-page ads—for Jordan Marsh, of course.

"No story should appear . . . whose writer could not shake hands the next day with the man about whom he had written."

Taylor moved the sermons off the front page and replaced them with news stories. While he emphasized the sensational aspects of crime stories, he saw the Globe as more than a mere crime report or gossip sheet. He set two goals for the Globe: Every reader "must find his name in the paper at least once a year," and "No story should appear . . . whose writer could not shake hands the next day with the man about whom he had written."

Taylor built readership by appealing to the tastes and interests of Boston's changing population. By the 1870s the Boston area was home to many immigrants and to an increasingly sophisticated middle class. Recognizing the new role women were playing as household consumers and homemakers, in 1878 he introduced articles aimed specifically at women and children. He cut the price of the paper to make it affordable to more middle-class families.

He started a Sunday edition especially targeted to these readers. Taylor wanted the Sunday paper to have a tone that was "pleasant, friendly, informal, homey, with human interest, and a neighborly interest too." One popular feature of the Sunday paper was paper dolls and cut-out fashions for young readers. In 1879, the paper added an evening edition, which was published until 1979.

Taylor also added reporters to cover the Irish community and the labor movement, as those constituencies began to play prominent roles in the life of the city. Although the Globe was almost alone among American newspapers in never taking a stand in any election, it generally supported Democratic causes and candidates. The Boston Democratic Committee returned the favor by asserting that it was "the duty of every Democrat in Massachusetts to aid personally in increasing the Globe's circulation and influence." In 1878, the editor declared that "the Globe will advocate all liberal measures which will advance the interests of the masses in their social and financial conditions." The Globe advocated for women's suffrage, shorter hours for factory workers, and other progressive causes.

Taylor wanted the Sunday paper to have a tone that was "pleasant, friendly, informal, homey, with human interest, and a neighborly interest too."

Charles Taylor also embraced technological innovation. In 1877 the Globe arranged to receive the first news report ever sent by telephone. The next day the paper ran the headline, "The First Newspaper Dispatch Sent By Human Voice Over the Wires." Taylor also invested in the newest presses and folding and trimming machines. By the 1890s the Globe was firmly established as a commercial and editorial success. Except for the 1930s and 1940s, when the rival Boston Herald Traveler temporarily surpassed it, the Globe remained the dominant paper in the city and the region.

Eben Jordan made Charles Taylor a partner, and Taylor served as publisher of the Globe for nearly 50 years. Three generations of Taylor men followed in his footsteps; together with the Jordan heirs, the Taylor family controlled the paper for 125 years.

For over a century, the Globe remained a private company, one of the few American newspapers not part of a larger chain. This era ended in 1993, when the Globe merged with the New York Times in the largest newspaper merger in U.S. history. In the next twenty years, newspaper publishers experienced significant challenges due to the growth of online news sources. The Globe entered the electronic age with the website boston.com in 1995. The New York Times Company sold the Globe in 2013 to Red Sox owner John Henry.

To schedule a tour of the Boston Globe, see the customer service FAQ on the paper's website.

Smithsonian Magazine: The Boston Globe of 1900 Imagines the Year 2000

On this day in 1947, Jordan, Marsh and Company announced that it was going to build "the greatest department store in the world" in downtown Boston. Almost a hundred years earlier, in 1851, Eben Jordan...