The Gerry Irony and other facts.

Some interesting facts about Gov./V. P. Gerry. He came from a large family, was one of 12 children. In addition to being a signer of the Declaration of Independence he was a signer of the Articles of Confederation. The Gerry irony is his refusal to sign the Constitution. At the time his arguments were it lacked a Bill of Rights. Plus, he opposed making the V. P. presiding officer of the Senate; because, in his view, it would assign an excessive amount of influence to the executive branch of government. While V. P., 1813 -1814, he worked tirelessly to influence the Senate through his Vice Presidential role. He was first elected to the legislature in 1772 on an Anti-British platform. Later he went on to serve in Congress. In all he ran for Governor seven times, was elected twice and defeated once for re-election --- he certainly was a persistent individual. Its unfortunate his name came to negatively symbolize a political practice that pre-dates his first application of same. Amazingly the practice has continued, in various manifestations, to present times. The 1962 Supreme Court decision, Baker Vs Carr, establishing the doctrine of One Man - One Vote has seriously reduced the implementation of this practice when confronted in court challenges. He had a grandson, also named Elbridge Gerry (1813-1886) who was elected to Congress from the state of Maine. His great grandson, Peter G. Gerry, likewise served in Congress and the U. S. Senate from R. I.
Typos

On this day in 1812, a political monster — the "Gerrymander" — was born in the Massachusetts State House. Governor Elbridge Gerry signed a bill that created oddly-shaped voting districts in several parts of the state. The lines of these districts gave Gerry's party an advantage in the upcoming election. An artist added a head, wings, and claws to the strange shape that was the governor's new home district and declared it looked like a salamander. A quick-witted friend decided a better name was "Gerry-mander." Within a month, the image appeared as a cartoon in the local papers and gerrymander [later pronounced with a soft "g"], entered the English language. The term has referred ever since to any deliberate redrawing of voting districts to influence the outcome of an election.

Gerry was one of five Massachusetts men to sign the Declaration of Independence. 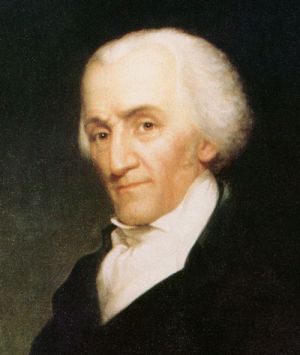 Although Elbridge Gerry devoted most of his life to public service, he is remembered not for his accomplishments but for giving life to an ugly political creature that still bears his name.

While Governor of Massachusetts, he signed a bill that authorized the legislature to redraw the boundaries of voting districts to favor one party over another. When the borders were redrawn, a map of one of the new districts looked like a monster. Opponents named that monster after the governor, and the "gerrymander" was born.

Elbridge Gerry was born in 1744 into a North Shore shipping family. For a decade after graduating from Harvard, he worked with his father and two older brothers in their Marblehead codfish-shipping business. In 1772 he was elected to the General Court. For the rest of his long life, he was rarely out of office. Indeed, at his death in 1814, he was serving as James Madison's Vice President.

Gerry was a first-term representative in the General Court when he fell under the spell of the radical Samuel Adams. Converted to the cause of independence, he served on the local Committees of Correspondence and Safety, and as a delegate to both the Provincial Congress and later the Continental Congress. He was one of five Massachusetts men to sign the Declaration of Independence.

Campaigns were as nasty as they are today, with party operatives exchanging malicious accusations and slanders.

During the war, he put his business savvy to work provisioning the army. He served in Congress throughout the war and for several years afterward. Although he was one of the most experienced men in Congress, he was not among the most influential. His colleagues admired his gentlemanly manners, attention to detail, and unwavering integrity, but they found him humorless and suspicious, a poor orator, unyielding in debate. His uncompromising ways were of little use to men struggling to craft a new form of government.

To the yeomanry of Massachusetts, however, his "stern Republicanism" was attractive. At a time of embargoes and financial crises, the Republican Party turned to the seasoned statesman as their candidate for governor. After several unsuccessful races, Gerry was elected in 1810 and returned to office in 1811.

On Beacon Hill, he entered a world of bitter and ugly partisan politics. For more than a decade, the Federalists, who supported a strong central government that would favor business and industry, had battled Jeffersonian Republicans, who were suspicious of any centralized power and looked to yeoman farmers to secure the nation's well-being.

As the 1812 election approached, the Republicans sought to insure Gerry's re-election. They had enough votes in the legislature to redraw the lines of voting districts to favor their party's candidates.

The shape of one new district — in Gerry's home county of Essex — resembled a fantastic dragon-like monster.

This was not an entirely new tactic. Political borders had often been manipulated in England, and the first known case in America took place early in the 1700s in Pennsylvania.

The redistricting bill signed by Gerry on February 12, 1812, was designed to produce a specific outcome. Republican legislators redrew voting lines so that the Federalist vote was concentrated in a few districts, while the Republican vote was spread over many. As a result of the new law, 50,164 Republican votes gained the party 29 seats, while the Federalists' 51,766 votes secured only 11 seats. The shape of one new district — in Gerry's home county of Essex — resembled a fantastic dragon-like monster.

Shortly after the bill was signed, Benjamin Russell, an ardent Federalist and Massachusetts newspaper editor, hung a map of the new district over his desk. It is said that the painter Gilbert Stuart visited Russell's office one day, and seeing creature portrayed on the map, added a head, wings, and claws. "That will do for a salamander," he said. The editor replied, "Better say a Gerry-mander!" Within a month, the image, with its newly coined name, appeared as a cartoon-map in the Boston Gazette.

The word "gerrymandering" has been used ever since to describe any rearrangement of voting district boundaries to influence the outcome of an election.

The redistricting bill signed by Gerry on February 12, 1812, was designed to produce a specific outcome.

The practice has continued to be a contentious issue in American politics. Even after an 1842 federal law required electoral districts to be compact and contiguous, Mississippi gerrymandered a "shoestring" in the 1870s that was 300 miles long and only 32 miles wide. Other famous gerrymanders have created districts shaped like frying pans, dumbbells, and turkey feet.

In the 1960s gerrymandering was used as a tool to reduce the voting strength of urban and black voters. A 1962 Supreme Court decision declared that election districts must be drawn according to the principle of "one man, one vote," and a 1985 ruling declared it unconstitutional to alter election districts to favor any one political party.

Nevertheless, every ten years, when states redraw their district lines to reflect the results of the latest census, charges abound that the practice named for Elbridge Gerry is alive and well.

On this day in 1803, the fiery patriot Samuel Adams died at the age of 81. A complete failure as a businessman, he was a brilliant political organizer, a talented writer, and a passionate public...