The first successful foray of a German submarine in Canadian waters was reported here today. Capt. Charles E. Dagwell of the British lumber schooner Dornfontein and his crew of eight men landed in their small boat on Grand Manan Island in the Bay of Fundy at 6:30 a.m. today and reported that their vessel had been held up, looted, and set on fire by a U-boat 25 miles southwest of Brier Island at 11:35 yesterday morning.

Whether the German decided it would be hopelss to try to sink the schooner by bombs, owing to the buoyant nature of her cargo of lumber, or whether he was economizing on his ammunition, is not known. But the torch was resorted to as the means of destruction.

Fires were started on various parts of the vessel, and today, 24 hours after the Dornfontein was attacked, a smudge of smoke from her hulk was visible from Grand Manan Island, indicating the craft was still afloat.

The Dornfontein was on her maiden voyage. She was of 1000 tons deadweight and was launched six weeks ago at St. John, N. B., the first ship to be sent down the way at the plant of the Marine Construction Company.

There were certain points of similarity in the actions of the submarine commander which led Naval vessels to believe that the U-boat was the same which sank four coal barges and set a tug afire off Cape Cod a week ago last Sunday, and also sent the Gloucester fishing schooner Robert and Richard to the bottom of the southeastern coast of Maine on the following Monday.

this was NOT only attack on US since was of 1812

from Wikipedia article on Pancho Villa: Cross-border attack on New Mexico [heading] On 9 March 1916, General Villa ordered nearly 500 Mexican members of his revolutionary group to make a cross-border attack against Columbus, New Mexico. The raid was conducted because of the U.S. government's official recognition of the Carranza regime and for the loss of lives in battle due to defective bullets purchased from the United States.[8] They attacked a detachment of the 13th Cavalry Regiment (United States), seizing 100 horses and mules, and setting part of the town on fire. 18 Americans and about 80 Villistas were killed.[9]. On 15 May, they attacked Glen Springs, Texas, killing a civilian and wounding three American soldiers; on 15 June, bandits killed four soldiers at San Ygnacio, Texas; on 31 July, one American soldier and a U.S. customs inspector were killed.[10]
U-156- the attack and Naval Air Station Chatham

Orleans was the site of the only enemy shells to fall on the U.S mainland in WW1- the tug Perth Amboy was severely damaged and her four barges were sunk by shellfire from the U-156. The aircraft responding from NAS Chatham were a U.S. Navy Curtiss HS-1L flying boat followed shortly by Curtiss R-9 seaplanes. The bombs dropped failed to explode and the sub moved out of the area heading North . The next morning the sub sank a fishing vessel off Gloucester and continued into the Grand Banks fishing grounds attacking the fishing boats. U-156 in turn was apparently sunk in a North Sea minefield on its return voyage to Germany. Ref. Wings over Cape Cod -Joseph D. Buckley p.27-33 ------------------------- Bill Deane Massachusetts Aviation Historical Society P.O. Box 457 Wakefield MA 01880
Other attacks on the U. S. mainland, WW II.

The ensuing are direct quotes from Wikipedia: Submarine operations: Main article: Bombardment of Ellwood "The United States mainland was first shelled by the Axis on February 23, 1942 when the Japanese submarine I-17 attacked the Ellwood Oil Field west of Goleta, near Santa Barbara, California. Although only a pumphouse and catwalk at one oil well were damaged, I-17 captain Nishino Kozo radioed Tokyo that he had left Santa Barbara in flames. No casualties were reported and the total cost of the damage was officially estimated at approximately $500ý1,000.[19] News of the shelling triggered an invasion scare along the West Coast.[20]" Bombardment of Fort Stevens: "In what became the only attack on a mainland American military installation during World War II, the Japanese submarine I-25, under the command of Tagami Meiji,[21] surfaced near the mouth of the Columbia River, Oregon on the night of June 21 and June 22, 1942, and fired shells toward Fort Stevens. The only damage officially recorded was to a baseball field's backstop. Probably the most significant damage was a shell that damaged some large phone cables. The Fort Stevens gunners were refused permission to return fire for fear of revealing the guns location and/or range limitations to the sub. American aircraft on training flights spotted the submarine, which was subsequently attacked by a US bomber, but escaped." Lookout Air Raids "The Lookout Air Raids occurred on September 9, 1942. The only aerial bombing of mainland America by a foreign power occurred when an attempt to start a forest fire was made by a Japanese Yokosuka E14Y1 "Glen" seaplane dropping two 80 kg (180 lb) incendiary bombs over Mount Emily, near Brookings, Oregon. The seaplane, piloted by Nobuo Fujita, had been launched from the Japanese submarine aircraft carrier I-25. No significant damage was officially reported following the attack, nor after a repeat attempt on September 29." Fire balloon Between November 1944 and April 1945, the Japanese Navy launched over 9,000 fire balloons toward North America. Carried by the recently discovered Pacific jet stream, they were to sail over the Pacific Ocean and land in North America, where the Japanese hoped they would start forest fires and cause other damage. About three hundred were reported as reaching North America, but little damage was caused. Six people (five children and a woman) became the only deaths due to enemy action to occur on mainland America during World War II when one of the children tampered with a bomb from a balloon near Bly, Oregon and it exploded.[24] The site is marked by a stone monument at the Mitchell Recreation Area in the Fremont-Winema National Forest.:
Login

On this day in 1918, people in the Cape Cod town of Orleans were astonished to see a German U-boat surface offshore and begin firing on an unarmed tugboat and the four barges it was pulling. Torpedoes set the tug ablaze and injured its crew, while constant shelling sank the barges. Thanks to the skill and courage of Coast Guardsmen, everyone was rescued. Some of the shells fired from the sub landed on the beach, making this the first time the U.S. mainland had been attacked since the War of 1812 and the only time the country was attacked during World War I. The state had been producing arms, vehicles, and supplies for the war effort and sending soldiers abroad, but no one expected what occurred that Sunday in Orleans.

Before the U-boat finally submerged and disappeared, nearly 800 people had witnessed what local historians later dubbed the "Battle of Orleans." 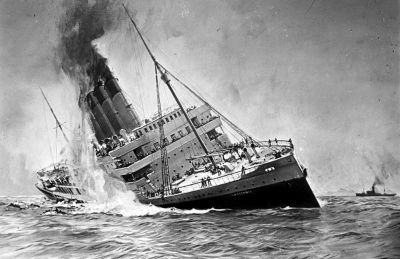 On Sunday, July 21st, haze on the horizon promised another steamy summer day in Orleans. Many people were at church, but some residents of oceanfront cottages were at home enjoying the view. Gazing out to sea, they could follow the slow progress of the 140-foot iron-hulled tug Perth Amboy towing four wooden barges.

Perhaps more than most other Americans, people on Cape Cod were aware that there was a war on. A French naval ship guarded the French Atlantic telegraph cables that had been laid in nearby Nauset Harbor, while U.S. Marines secured the cable company's property. Down the road in Chatham, the navy had recently completed an airbase, while vessels from the Chatham Coast Guard Station patrolled the waters. But the greatest change since the conflict began in August of 1914 was the increasing traffic in the nearby shipping lanes as American vessels carried ammunition, food, and supplies overseas.

It was this shipping that eventually drew the U.S. into the European war. Determined to cut off supplies to the French and English, Germany had pledged to use its newest weapon — the submarine, or "U-boat" — to fire on any vessel in what it considered a "military zone." Americans were outraged when, in March of 1915, a German U-boat sank the passenger liner Lusitania off the coast of Ireland, killing nearly 2,000 civilians, including more than 100 Americans.

Determined to cut off supplies to the French and English, Germany had pledged to use its newest weapon — the submarine, or "U-boat" — to fire on any vessel in what it considered a "military zone." 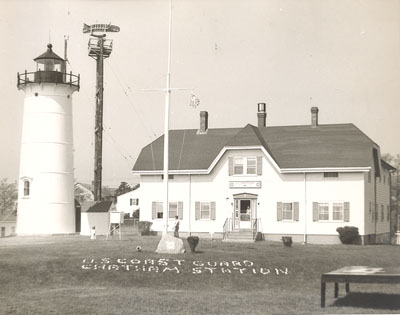 Feelings intensified as German U-boats repeatedly sank merchant and civilian vessels. The sinking in October 1916 of six merchant steamships off Nantucket brought the war very close to home for the people of Massachusetts. As submarine attacks on U.S. vessels continued, Congress finally declared war on Germany in May of 1917.

But while fighting raged in France and Belgium in the summer of 1918, it was peaceful on Cape Cod. The calm was shattered on July 21st. A large cigar-shaped object surfaced in the waters off Orleans. People on the east-facing bluff watched in horror as a German U-boat fired torpedoes at, and then shelled, the defenseless tug and barges.

A plane arrived from the Chatham airbase, but its bombs were duds. The Germans kept up a constant barrage. There were 32 people, including the captains' wives and children, aboard the sinking barges and burning tug. Men from the Chatham Coast Guard Station rowed lifeboats directly into the heart of the shelling and heroically rescued them all. Before the U-boat finally submerged and disappeared, nearly 800 people had witnessed what local historians later dubbed the "Battle of Orleans."

People on the east-facing bluff watched in horror as a German U-boat fired torpedoes at, and then shelled, the defenseless tug and barges.

Residents of Orleans may have had the most direct experience with the enemy, but by 1918, there were few people in Massachusetts who had not been affected by the war. Even before the U.S. entered the conflict, the Quincy shipyard had been gearing up production, while the state's textile and shoe factories had increased their output to meet demands for military uniforms, boots, and gear. Arms manufacturers had ramped up production. By the time the U.S. entered the war, industry was producing at record levels. In fact, the high employment rate and general desire to aid the war effort quelled, at least temporarily, much of the labor unrest and radicalism that had roiled many of the state's cities and towns before the war.

The Versailles Treaty brought peace to Europe in 1919, but it also brought a drop in business for Massachusetts manufacturers, which in turn caused conditions that were far from peaceful. Indeed, 1919 would turn out to be one of the most turbulent years in the state's history.

The Orleans Historical Society preserves the town's history and stories of its people.

It Happened in Massachusetts, by Larry B. Fletcher (Globe Pequot Press, 1999).