After the enthusiasm which followed the uncovering of the portrait had partially abated, Mr. Peabody arose and addressed the children as follows.

Nearly two generations have passed away since I left this, my native Town, with probably less education than even the youngest among these I now address, and with no prospect of future success in life beyond that of any boy now before me who possesses good health, industry, and perseverance, with a heart and mind determined to make pure principles has guide. My course is well known, and I fear too much appreciated by our whole country, but praise, even but partially deserved tends to stimulate to extra exertion, both physically and morally, particularly the young, and I hope and pray that every one within the sound of my voice, may experience as I have the truth of these remarks, and deserve that pride and satisfaction which are sure to attend all those who do right, and benefit their fellow men.

All of you, my young friends, should aim at a high mark in this respect, and undoubtedly many of your number, of both sexes, will arrive at distinction in society, but neither my regard for truth or past experience will justify me in promising to any one of you that great success which has ever attended me. Scarcely one in an age attains to it, and I feel most sensibly that it is only by the guidance and blessings of my Heavenly Father from early life to my present advanced age, that I have been enabled to accomplish so much for the physical comforts of the needy, and the promotion of Knowledge and Morality for the present and future generations. As you advance in life you will find that years will appear short in comparison to those occupied by your studies at the present time. This is my second visit to my Native Land for thirty years, and the period appears brief to me. Time and Generations pass most rapidly.

Excerpted from Reception by George Peabody of the School Children of South Danvers, October 15, 1866, by Peabody Institute Library, 1866.

"On[e] of the largest charities in London..."
Typo

Yes, I noticed the typo for the word "One" also, however, I couldn't find WHERE to post something other than a typo. Here's my info and edit: George Peabody was buried in Salem, MA, interred in Harmony Grove Cemetery. In fact, I saw a sketch or mezzotint several years ago of the hundreds and hundreds of people following the horse-drawn "hearse" into Harmony Grove. It was wonderful the impact he had on people, both in England and here. ------------------------- DVM in Boston
Login

On this day in 1853, George Peabody thanked the citizens of South Danvers for naming the high school in his honor and immediately set up a $200 account "to be expended as rewards of merit to the pupils." Fifteen years later, the town changed its name to Peabody as a tribute to its distinguished and generous native son. Born into a poor family, George Peabody received little formal education. He began an apprenticeship in a drygoods store at the age of 11. By the time he was in his forties, he had made a fortune in investment banking. He was an extraordinary philanthropist, donating almost $10,000,000 — the equivalent of $130,000,000 today — for education, libraries, museums, and homes for the working poor.

His funeral was held at Westminster Abbey, a rare honor for a foreigner. On the day of the service, church bells tolled in Boston and Baltimore. 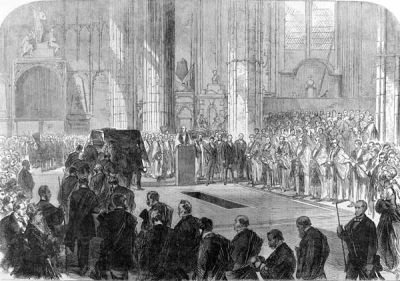 Born in 1795, George Peabody was 11 years old when he was apprenticed to Captain Sylvester Proctor, who owned the general store in South Danvers. Later in life, Peabody attributed much of his success to what he had learned on his first job. He also remembered the kindness the Proctor family had shown him. Many years later, when the Proctors encountered financial difficulties, he settled all of the family's debts and assumed responsibility for their expenses.

This was a pattern he followed in virtually all of his philanthropic endeavors — establishing institutions or funds in places he had lived or to which he had a connection, and helping on a personal level, too. He had no children of his own and paid for the education of all his nephews and nieces.

After completing his apprenticeship, he turned down a job offer from Captain Proctor and moved to Newburyport to work at his brother's drapery shop. The brothers' relationship was tense. Even at 15, George was the more skillful money manager. After the Great Fire of 1811, which destroyed more than 250 homes and businesses in Newburyport, George relocated to Washington, D.C., where he and an uncle opened a drygoods store. A partnership with Elisha Riggs followed, and when that trading business outgrew its premises in D.C., Riggs and Peabody moved to Baltimore. George Peabody would live there for the next 20 years.

This was a pattern he followed in virtually all of his philanthropic endeavors — establishing institutions or funds in places he had lived or to which he had a connection, and helping on a personal level, too.

Peabody prospered. He was driven, hard-working, attentive to detail yet able to see the big picture, and willing to take calculated risks. In 1827 he left on his first business trip abroad. In the next decade, he settled in London and founded his own investment firm, George Peabody & Co. In 1854 he formed a partnership with fellow American, Junius Spencer Morgan. Morgan's son, the future banking tycoon John Pierpont Morgan, began his career as an apprentice with the company in London and then became its representative in New York.

In the 1850s, with his fortune secure, George Peabody began to give away large amounts of money. In all, he founded or contributed to libraries and lecture halls in seven communities to which he had ties. In Baltimore he founded the first academy of music established in America; the Peabody Institute became a world-renowned conservatory.

After the Civil War ended, he created the Peabody Fund for Southern Education, with a donation of $2,000,000. Designed to "promote and encourage the intellectual, moral, and industrial education of the destitute children of the Southern States," the Fund did not distribute its resources equitably, with black schools receiving less than white ones or nothing at all. In 1914 the trustees dissolved the fund and redirected the money to departments of education at southern universities and to what is now the Southern Education Foundation for African American Education.

Peabody lived the last 32 years of his life in London, where he gave $2,500,000 to create affordable housing for the working poor, a gift Queen Victoria called "wholly without parallel." One of the largest charities in London, the Peabody Trust now provides homes for 27,000 people, as well as employment training.

George Peabody died in November 1869. His funeral was held at Westminster Abbey, a rare honor for a foreigner. On the day of the service, church bells tolled in Boston and Baltimore. Outside the Abbey, "the gaunt, famished London poor . . . gathered in thousands to testify their respect for the foreigner who had done more than any Englishman for their class, and whose last will contains an additional bequest to them of £150,000," wrote the New York Times. His body lay at the Abbey for a month before the Royal Navy's newest and largest warship, the Monarch, carried it home. As he had wished, he was laid to rest in his native Peabody.

"George Peabody, The Great Benefactor," by Ruth Henderson Hill for the Centennial of the Peabody Institute, Peabody, MA, 1953.

On this day in 1867, a Worcester newspaper announced that "in accordance with the desire of a number of citizens," a freedmens' office would be established to make it easy for white employers to hire...