Ted Rogers, later a veteran Lynn engineer and manufacturing manager, recalled the drama that took place on On October 2, 1942:

"…we worked until 3:30 a.m. (the morning of the flight)…this was the day! Stanley climbed into the cockpit…a brief wave…and he was off, taxiing to the far end of the field. He turned at the end of his taxi run and ran both engines alternately to maximum speed…a momentary pause while the pilot released the brakes…the jets began to take hold…the plane rolled ever so slowly at first…with us mentally pushing it on…soon began to pick up speed…just opposite us it lifted gently into the air…continued straight away, gaining altitude…past the end of the field…banked and crossed directly over our heads…what a strange feeling…dead silence as it passed directly overhead…then a low rumbling roar like a blow torch…and it was gone, leaving a smell of kerosene in the air…after about ten minutes of low level flight, Bob landed…"

Why wasn't it produced in WW II?

If we successfully tested a jet aircraft in the fall of 1942 why didn't we produce one for use in WW II? The war, with respect to the Pacific area, would last almost 3 more years.
Why wasn't it produced in WW II?

Who was it that described Boston as the place where the Charles and Mystic Rivers come together to form the Atlantic Ocean? ------------------------- Eli Bortman Babson College
Why wasn't it produced in WW II?

The answer to your question is the U. S. didn't produce any jet aircraft that saw actual combat in WW II; hence, the real question is why? As for the Germans, the Messerschmitt ME 262 jet fighter made its initial test flight on July 18, 1942. It first saw action in Aug., 1944. By war's end more than 1,400 ME 262's, of all variants, had been produced. Of these approximately 200 were involved in combat. There were many reasons why roughly one-seventh of the production run saw combat, some examples would be: shortage of trained pilots and fuel, engines changes were necessary after 20 to 25 hours of operation, continued allied bombing of production facilities and selected airfields, and there were only a few airfields capable of effectively handling the ME 262 --- Concret runways were needed because the jet engines tended to melt tar runways. How many of the approx. 200 were destroyed in air to air combat is not exactly known.
First flight of an American jet engine.

Sorry this post added in error.
My grandfather probably worked on this engine

My grandfather was chief turbine tester at the River Works during and after WW II. He never talked about it, but I'm certain that he was involved in this project.
Login

On this day in 1942, after months of highly secret work, GE engineers in Lynn successfully tested the engine they called by the innocuous name "I-A." It was the first jet engine built in the United States. An English scientist had designed a jet engine in 1941. When an Air Force general saw it power a plane, he was impressed enough to award General Electric a contract to adapt the design to American specifications. Installed with two of these I-A engines, a Bell P-59A aircraft made its maiden flight in the fall of 1942. Building on its success in Lynn, GE's Aircraft Engine division has since become the world's leading producer of jet engines used in commercial and military aircraft.

Technology developed for the gas turbine engines used in aviation was adapted to create the engines that propel every major surface vessel in the U.S. Navy. 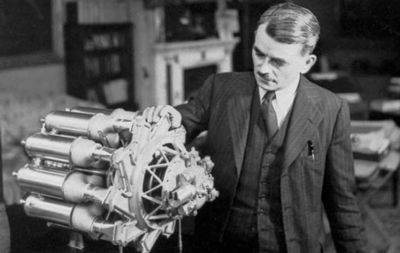 In the early months of 1942, scarcely 20 people knew what was really going on in Building 34 North at the General Electric plant in Lynn. The engineers referred to the engine they were working on simply as "I-A," similar to names they had assigned to the turbo supercharger engines they had been designing and building. Men and women who worked on the floor making various parts for the compressor or combuster had no reason to think I-A was anything out of the ordinary. But it was. I-A was the first jet engine built in the United States.

It was not the first jet engine ever designed, however. Nor was it the first to be used successfully in an aircraft. In August 1939 a jet engine designed and built by a German engineer, Hans von Ohain, powered an experimental plane, the Heinkel HE 178. At approximately the same time, a British scientist, Sir Frank Whittle, was also hard at work on a jet engine. A plane equipped with his engine was first flown in May of 1941. With their nations at war, neither man knew anything about the other or his work. (The two scientists would finally meet in the United States in 1978.)

Men and women who worked on the floor making various parts for the compressor or combuster had no reason to think I-A was anything out of the ordinary.

The British and Americans were, of course, in close communication, and shortly after Whittle's engine was tested, Henry H. "Hap" Arnold, commanding general of the Army Air Force, traveled to England to see the jet-powered plane in action. On his return, he selected the General Electric Company to adapt Whittle's design to American specifications.

General Electric traces its roots to Thomas Edison, who established the Edison Electric Light Company in 1878. GE was the result of the merger in 1892 of Edison's company and the Thomson-Houston Electric Company of Lynn. The huge GE plant became known as the Lynn River Works l. By the 1940s, GE had four divisions — the Lighting Division, the Motor and Motor Generator Division, the Turbine Gear Division, and the Supercharger Division.

The building where I-A was bolted solidly to the floor was dubbed "Fort Knox;" it had 18-inch-thick concrete walls in case the engine blew apart.

In the first decades of the twentieth century, the Supercharger Division worked chiefly on developing and building turbo superchargers, or engine "boosters." These "turbos" utilized the exhaust produced by the pistons to increase an engine's power. This is especially useful for aircraft engines because it allows planes to fly at higher altitudes, where the air is thinner. Under the direction of Dr. Sanford Moss, GE developed this technology for the Army. Moss was the first GE engineer to receive the prestigious Collier Trophy, in recognition of "the greatest achievement in aeronautics or astronautics in America, with respect to improving the performance, efficiency, and safety of air or space vehicles." With all this experience, the GE engineers in Lynn were an obvious choice to work on the jet engine.

With Whittle's design in hand and two British engineers to help, the Lynn team went to work building the engine. By April 18th I-A, the modified engine, was ready for testing. The building where I-A was bolted solidly to the floor was dubbed "Fort Knox;" it had 18-inch-thick concrete walls in case the engine blew apart. The test log for that day states: "We did a great deal of checking before attempting to start; a great deal of trifling troubles were found and remedied — but after many attempts Type I RAN." Five months later I-A was tested at an air base in California in the P-59A Airacomet, built by Bell Aircraft.

Toward the end of World War II, the men and women who were involved in the first jet engine flight formed the Jet Pioneers Association.

Over the next two years, GE engineers developed ever more powerful engines. Their J33 produced four times the thrust of the I-A. It powered the T-80 Shooting Star, the U.S. Army Air Corps' first operational jet fighter, and in 1947 established a new world speed record of 620 m.p.h. Engineers at General Electric Aircraft Engines (GEAE) would achieve many more "firsts," among them the first Mach 2 and the first Mach 3 engines. Technology developed for the gas turbine engines used in aviation was adapted to create the engines that propel every major surface vessel in the U.S. Navy and is also used to generate most of our electricity.

Toward the end of World War II, the men and women who were involved in the first jet engine flight formed the Jet Pioneers Association. Membership was limited to those who knew "about the secret before it flew." In October 1992, members of Jet Pioneers attended the 50th anniversary commemorative ceremonies held at Edwards Air Force Base. Later the same month, GE invited the public to visit Lynn's Building 34 North, where I-A was secretly built 50 years before.

On this day in 1926, Clark University physics professor Robert Goddard launched the world's first liquid fuel rocket — and with it the space age. Standing in a snow-covered field in Auburn, Massachusetts, he watched...