From Frances Perkins's published recollections about the Roosevelt Administration:

Before his inauguration in 1933 Roosevelt had agreed that we should explore at once methods for setting up unemployment and old-age insurance in the United States.

Therefore, early in 1933, the President encouraged Senator Wagner and Representative David J. Lewis, both deeply interested in the subject, to go ahead with their bill on unemployment insurance. The bill, a rough draft, was put in frankly for educational purposes. It was hoped that in the course of hearings the congressional committees and the introducers of the bill would work out a satisfactory and typically American plan.

The President urged me to discuss the matter in as many groups as possible. I began in the cabinet. I made a point of bringing it up, at the least, every second meeting. Gradually the other cabinet members became sincerely and honestly interested…

The Wagner-Lewis bill in the Congress covered only unemployment insurance, but there was a great demand for old-age insurance also. It was easy to add this feature – and politically almost essential. One hardly realizes nowadays the sentiment in favor of the Townsend Plan and other …schemes for giving the aged a weekly income. In some districts [it] was the chief political issue…

"We have to have it," [Roosevelt] said. "The Congress can't stand the pressure of the Townsend Plan unless we have a real old-age insurance system, nor can I face the country without having devised at this time, when we are studying social security, a solid plan which will give some assistance upon retirement." The President was in the midst of one of the minor conflicts of logic and feeling which so often beset him but kept him flexible and moving in a practical direction…

…Several years later a move got under way for a modification of the Social Security Act, particularly the old-age insurance system, to have what was euphemistically called the pay-as-you-go system. The President didn't like it, but he was interested in extending social security. He wanted it to protect more people. He wanted the benefits raised when the time came. The pay-as-you-go policy was a secondary consideration and all right if the Congress wanted it. I don't think he ever realized that that was the exact system which he had rejected…in 1934.

He always regarded the Social Security Act as the cornerstone of his administration and, I think, took greater satisfaction from it than from anything else he achieved on the domestic front."

From The Roosevelt I Knew, by Frances Perkins (The Viking Press, 1946)

On this day in 1880, Frances Perkins, the first woman to hold a cabinet position, was born in Boston. Raised in Worcester, she attended Mt. Holyoke College, where she became committed to improving the lot of working people. Many years later, when Franklin Roosevelt was elected president, he named Frances Perkins Secretary of Labor. "Madam Secretary," as she was called, was instrumental in establishing the Social Security system, winning minimum wage laws and bargaining rights for workers, and ending child labor. Looking back, she remembered feeling that she had a "duty to other women to walk in and sit down on the chair that was offered, and so establish the right of others long hence and far distant . . . to sit in the high seats."

While Mrs. Roosevelt had urged her husband to appoint Frances Perkins and supported her when she came under criticism from outside the administration, the two women did not always agree. 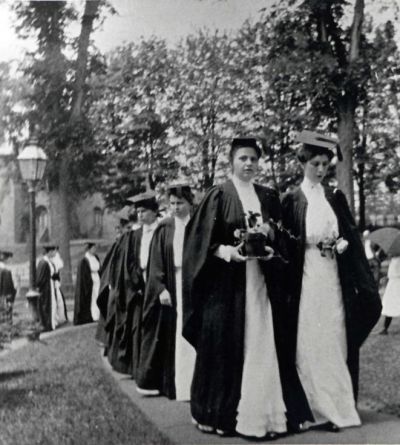 Frances Perkins was part of a generation of Massachusetts women who devoted their lives to fighting economic and social injustice. President Franklin Roosevelt recognized her abilities when he chose her to be his Secretary of Labor.

Fannie Coralie Perkins was born in Boston in 1880 into a comfortably middle-class Republican family. When she was two, her father moved the family to Worcester, where he had started a stationery business. Fannie Perkins was one of the few female students at Worcester Classical High School, a public college preparatory school. In 1898 she enrolled at Mount Holyoke, the country's oldest women's college.

At Mt. Holyoke, Perkins was deeply influenced by an economic history course that required her to survey working conditions in the nearby industrial city of Holyoke. She was also affected by reading about the suffering caused by poverty, unfair labor practices, and unhealthy living conditions. In her senior year, she heard an address by Florence Kelley, head of the National Consumer's League, a women's group that advocated for decent wages and working conditions. Perkins became a convert to Kelley's cause.

After graduation, Perkins returned to Worcester where she taught and did volunteer work for social reform organizations. In 1904 she took a teaching job outside of Chicago. She spent her free time working with Jane Addams at Hull House. One of her duties was to try and collect wages for workers who had been cheated by their employers, a responsibility that took her into the homes of the city's poorest residents.

One of her duties was to try and collect wages for workers who had been cheated by their employers, a responsibility that took her into the homes of the city's poorest residents. 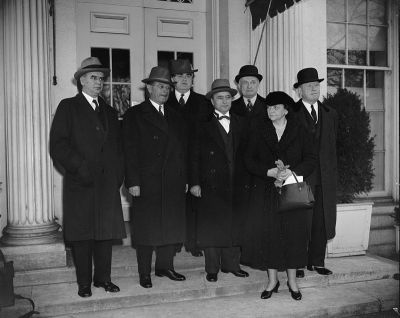 After three years in Chicago, Perkins returned east to pursue graduate work in economics and sociology. She spent the summer of 1909 surveying living and working conditions in Hell's Kitchen, one of New York's worst neighborhoods. The next year, after receiving an M.A. from Columbia, Perkins began a career in social and labor reform that would span the next half century.

In her first position, as secretary of the New York Consumer's League, Perkins publicized sweatshop conditions and lobbied for industrial reform. She had barely started her job when the tragic Triangle Shirtwaist Company fire took the lives of 146 workers, trapped behind the locked doors of the factory. Frances Perkins was there watching in horror as young women prayed on window ledges before jumping their deaths. Those memories fueled her desire to fight for America's working people.

In 1913 Perkins married economist Paul Wilson. Seven years earlier she had legally changed her name from Fannie to Frances; in defiance of convention, she kept the name "Perkins" when she married — a choice she had to defend in court. After the couple's daughter was born in 1916, Frances dedicated herself to motherhood and volunteer work. However, in 1918 her husband lost first his money (through imprudent investments) and then his mental health. Paul Wilson spent much of the rest of his life in institutions, and his wife returned to paid employment.

The governor of New York appointed Frances Perkins to the state Industrial Board, where she worked for the next 25 years to improve health and safety in the workplace. Among her goals were reducing the work week to 54 hours, protecting the livelihood of those injured on the job, ending child labor, and improving employer-union relations. She advocated for a minimum wage law, workman's compensation, and unemployment insurance.

. . . in defiance of convention, she kept the name "Perkins" when she married — a choice she had to defend in court. 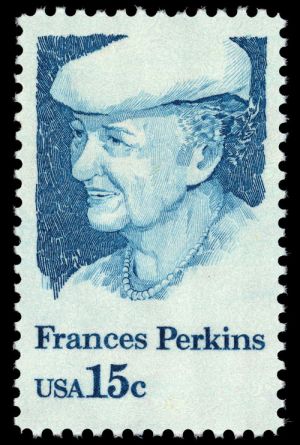 In 1932, with the nation in the depths of the Great Depression, New York Governor Franklin Roosevelt was elected President. There was speculation that he would make history and name a woman — his longtime supporter Frances Perkins — to his cabinet. Perkins herself resisted the idea, urging instead that a female trade unionist be appointed. With encouragement from his wife, FDR renewed the offer. Perkins accepted on two conditions. First, she must be allowed to return to her husband in New York on weekends; second, Roosevelt must support her extraordinarily broad plans for labor reform. The president agreed.

At a dinner in Perkins's honor, Eleanor Roosevelt explained that she had been named to her position "not only because there was a demand on the part of the women that a woman should be given a place in the Cabinet, but because the particular place which she occupies could be better filled by her than by anyone else, man or woman, with whom the President was acquainted." While Mrs. Roosevelt had urged her husband to appoint Frances Perkins and supported her when she came under criticism from outside the administration, the two women did not always agree. Perkins was the more practical, Roosevelt the more idealistic of the two. Although Eleanor was personally closer to the President, Frances Perkins was more likely to share his sense that compromises had to be made.

Although the male leaders of the labor movement were initially antagonistic, they soon came to trust her. As Secretary of Labor, Frances Perkins was at the heart of much of the New Deal agenda. Roosevelt told the nation in March of 1933 that devastating unemployment could be addressed only "by direct recruiting by the Government itself." Over the next 100 days, the administration proposed, and Congress passed, a series of new laws to deal with the crisis. Many of these bills were drafted by Frances Perkins.

When she was asked if she had ever doubted whether she should have taken the post, she recalled her grandmother teaching her "that if anybody opens a door, one should always go through."

She convinced Roosevelt to ask Congress to authorize "immediate federal aid to the states for direct unemployment relief, an extensive program of public works, a federal law of minimum wages, maximum hours, true unemployment and old-age insurance, abolition of child labour, and the creation of a federal employment service." All of these measures were passed during her tenure as Secretary of Labor.

Frances Perkins is credited with being the architect and chief advocate of: the National Labor Relations Act, which protected workers' rights to organize, the Social Security Act, which provided insurance to the aged unemployed, and the Fair Labor Standards Act, which regulated wages, hours, and working conditions and prohibited child labor.

When she took her cabinet post, many Americans expressed doubt that a woman could handle such a demanding job. Even her former boss and admirer Al Smith commented that "men will take advice from a woman, but it is hard for them to take orders from a woman." But Frances Perkins succeeded. She adopted a matronly style of dress to seem less threatening to men and downplayed her own role. She could, however, be tough when she had to be. On one occasion, employers chased her away from a steel mill where she had gone to address the workers; undeterred, she marched to the nearest post office — federal territory — trailed by a crowd of steelworkers and calmly fielded questions about the right to organize.

Perkins served as Labor Secretary for 12 years — through all four of Roosevelt's terms and briefly under Truman, longer than any other person has held the position. When she was asked if she had ever doubted whether she should have taken the post, she recalled her grandmother teaching her "that if anybody opens a door, one should always go through."

The Making of the New Deal: The Insiders Speak, ed. by Katie Louchheim (Harvard University Press, 1983).

A Woman Unafraid: The Achievements of Frances Perkins, by Penny Colman (Atheneum, 1993).

On this day in 1999, Margaret Marshall became the first woman appointed Chief Justice of the Massachusetts Supreme Judicial Court. The oldest court in the Western Hemisphere, the SJC was established in 1693 in the...