The Reverend J.S. Popkins described the meetinghouse in Newbury, Massachusetts, which was completed in 1700.

The body was filled with long seats. Contiguous to the wall were twenty pews. The spaces for the pews were granted to particular persons who appear to have been principals. Before the pulpit and deacons' seat was a large pew containing a table where sat the chiefs of the fathers. The young people sat in the upper gallery, and the children on a seat in the alley fixed to the outside of the pews. The floor measured 60 feet by 50 feet. The roof was constructed with four gable ends or projections, one on each side, each containing a large window which gave light to the upper galleries. The turret was on the center. The space within was open to the roof, where was visible plenty of timber with great needles and little needles pointing downward which served at once for strength and ornament. There were many ornaments of antique sculpture and wainscot. It was a stately building in the day of it.

Informative article. Thank you. Two additional resources definitely not to miss, if one is interested in learning more about early Puritan meeting houses and worship are: Meetinghouses of Early New England, by Peter Benes (University of Massachusetts Press, 2012). This book is a wonderful and comprehensive resource on its subject. It builds on and greatly expands the information available in Sinnott's classic book. The Worship of the American Puritans, by Horton Davies (printed by Soli Deo Gloria Publications, 1999--though copyrighted in 1990 by Peter Lang Publishing, Inc.) This is another fine resource. ------------------------- "Explore Congregational Church History" -- Facebook Group
Login

On this day in 1735, Framingham's town meeting voted to "give the old meeting house frame" to their minister, who would undoubtedly find another use for it. The town had erected its first meetinghouse in 1698. By the early 1730s, the building had fallen into disrepair, and the town decided to replace it. Meetinghouses in colonial Massachusetts were literally houses in which the community met, for religious, social, and political purposes. Attendance at religious services was compulsory, and only the most essential work was performed on the Sabbath. "Going to meeting" was the central event of the week, a time not only for worship but for nourishing ties between friends, family, and neighbors. Many a young couple conducted their courtship during the break between Sunday sermons.

The Puritan Sabbath stretched from sundown Saturday to sundown Sunday. Anything that hinted at recreation was strictly forbidden.

Like early settlers' homes, the first meetinghouses in the Massachusetts Bay Colony were simple structures that served multiple purposes. Built and owned by the town in which it stood, the meetinghouse served primarily as a place of worship, but it was not a sanctified building. It was the setting for town meetings, social gatherings, and legal proceedings. In some cases, the meetinghouse was fortified to serve as a garrison in case of raids by Indians.

The meetinghouse was the focus of community life. Attendance at religious services was mandatory in Puritan Massachusetts, with absence punishable by whipping. No decision involving the meetinghouse was taken lightly. It was not uncommon for disputes over the location of a new meetinghouse to last for years, since the choice of a site could impose hardships on families that lived at a distance.

When the founders of Framingham, a village 20 miles west of Boston, appealed to the legislature for permission to establish a new town, they believed that building a meetinghouse would bolster their cause. Apparently they were right: the town was incorporated a year after they began holding services in the new meetinghouse.

Attendance at religious services was mandatory in Puritan Massachusetts, with absence punishable by whipping. 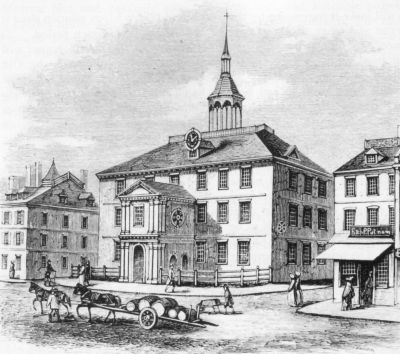 Framingham's first meetinghouse was typical of those built in the late seventeenth century. It was square, two-storied, with a hip roof, and doors on three sides. The inside walls were unfinished. An elevated pulpit stood on one side, and a gallery ran along the other three sides, just under the eaves. Seating on the ground floor was divided by gender, with women on the east side, men on the west, and a "bar" across the center. Children, servants, and enslaved people were relegated to the gallery. Everyone sat on rough wooden benches.

The Puritan Sabbath stretched from sundown Saturday to sundown Sunday. Anything that hinted at recreation was strictly forbidden. The only travel permitted was to and from worship. There were two services on Sundays. The morning one lasted three hours; another two-hour service followed the mid-day meal. Both included religious readings, prayers, chanted psalms, and very long sermons. A tithing man walked up and down the aisles, long pole in hand. If he caught anyone squirming or nodding off, he poked him or her.

When support for the church became voluntary, rather than compulsory, most communities auctioned off pews to the highest bidder.

Although the seats were uniformly uncomfortable, seating was nevertheless a contentious affair. A town committee assigned seats based on established criteria (usually some mix of wealth, age, lineage, learning, and/or public service). The higher your status in the community, the closer to the pulpit you sat. Every three, five, or ten years, the committee would reassess seating arrangements. Periodically, town fathers would remind the congregation, as they did in Framingham in 1721, "that the Deacons be desired to take special notice of all disorderly persons on the Lord's day, that do not keep to their own seats appointed them, but keep others out of their seats, whereby the Sabbath is profaned; and that they admonish them for their misbehavior in that respect."

In time pews came to replace the benches, with the cost covered by members of the congregation. When support for the church became voluntary, rather than compulsory, most communities auctioned off pews to the highest bidder. Money and effort went into improving the interiors of meetinghouses; ornamentation appeared around the belfry, the porch, and especially the pulpit.

In the 1700s, a new oblong design, with a two-sided roof, replaced the square meetinghouse. People entered through a main door in the middle of one of the long sides, and the pulpit stood opposite the entrance. The belfry, which used to be on the peak of the hip roof, was now found in a tower added onto the end of the structure.

An Englishman traveling in Connecticut in 1795 observed that "the custom of stopping [travel] on the Sabbath is fast wearing out, the law becoming obsolete."

By the end of the eighteenth century, there was a slight relaxation in the Sabbath regulations. An Englishman traveling in Connecticut in 1795 observed that "the custom of stopping [travel] on the Sabbath is fast wearing out, the law becoming obsolete." But there was no confusing Sunday with any other day of the week. Farmers still did no work in the fields, shops and stores were closed, and mills did not operate.

The nineteenth century brought further changes that affected the appearance and use of the meetinghouse. Episcopalian, Baptist, Universalist, and Methodist churches joined Congregational houses of worship around town commons.

The architecture changed, too, and meetinghouses began to be referred to as churches. Worshippers entered through a door at one narrow end, opposite the pulpit set at the other end. The steeple and belfry rose over the entrance. Though still stark in comparison with European and later American houses of worship, New England churches grew steadily more elaborate — and comfortable. In time, communities built town halls for conducting town business, and churches served only as religious buildings. Even as the function of the church became increasingly distinct from that of the meetinghouse, New Englanders continued to speak of "going to meeting," when referring to a church service.

Old Ship Meetinghouse in Hingham is the oldest meetinghouse with continuous services in the United States.

Old South Meetinghouse in Boston, built in 1729, is an excellent example of eighteenth-century meetinghouses. Open to the public daily.