VIGOROUS ACTION TO STAMP OUT GRIPPE

18 Deaths From Disease in Boston Yesterday

There have been more than 200 cases at Boston City Hospital, which has been closed to visitors for an indefinite period by order of Acting Supt Edmund W. Wilson. Only in emergency cases will relatives of patients be admitted. Thirty-eight of the nurses are ill with grippe.

Prison Commissioner E. C. R. Bagley has issued an order prohibiting visitors at any of the penal institutions in the State. No cases of grippe have been reported at these places, but Commissioner Bagley says he is going to take no chances.

In the 1st Naval District

Rear Admiral Spencer S. Wood’s report for the 13 Naval stations in the 1st District yesterday showed a total of 2449 cases, with 49 deaths, for the period during which bulletins have been posted. . . .

In every hospital of Greater Boston grippe cases are being treated, and the scarcity of physicians and nurses, due to the enlistment of so many in this region for war service, has accentuated the seriousness of the situation.

Gloucester joined the places where public schools have been ordered closed until the danger is past. In Boston public schools 17 new cases were reported, bringing the total up to 50, and absentees in upper grades, many of whom are believed to be suffering in some degree from the grippe, is 40 percent, and in lower grades 30 percent.

Neither Dr William H Devine, medical director of the schools, nor Dr W. C. Woodward, City Health Commissioner, is in favor of closing Boston schools. They say that by remaining at their studies pupils are less likely to become affected, especially since teachers, school physicians and nurses are doing everything in their power to head off the epidemic.

Health Commissioner Woodward points out that no deaths have been reported among school children, and the teaching force remains intact.

In his opinion, the epidemic is not yet at its height, and he wards those who are suffering from slight cases to refrain from work until they are cured.

Dr Woodward advises people to remain outdoors as much as possible on warm, dry, sunny days. A half-hour’s sun bath, he says, means death to the germs. Plenty of exercise is also recommended by the commissioner.

The article proclaims between 50,000,000 to 100,000,000 died. Those figures seem very extreme in their totality. A check of Wikipedia produced a scholarly piece entitled, "The Influenza Epidemic of 1918, by Carla R. Morrisey, RN, BSN." Ms Morrisey reports its was "the third greatest plague in the history of mankind," and that "over 21,000,000" lives were taken. I am sure no one has an exact number but it would be interesting to see what other documanted totals readers can obtain from researching the question of how many died.
Number of deaths.

People stayed home to avoid catching the flu, but could hear the church bells for the funerals. Someone in Stoughton MA was quoted as saying, "it sounded as if everyone in the world was dying." Dwight

An excellent read is
Influenza and Inequality:
One Town’s Tragic Response to the Great Epidemic of 1918
Patricia J. Fanning

On this day in 1918, two sailors housed at Boston's Commonwealth Pier reported to sickbay. The men were the first Americans stricken with a strain of influenza that would prove far more dangerous than the German army. By the end of the week, 100 new cases a day were being reported among the sailors at the pier. The disease spread with terrifying speed through both the military and civilian populations. In the next 24 weeks, the epidemic would affect more than 25,000,000 Americans. More than 675,000 would not survive the illness. The flu would take far more lives than the war then raging in Europe. Worldwide, between 50,000,000 and 100,000,000 people would die before the epidemic abated in December. 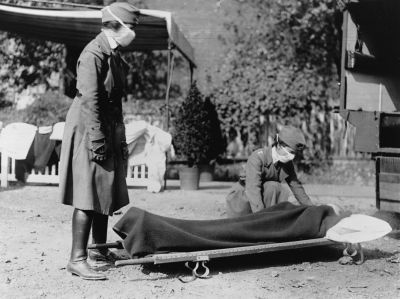 The men who fell ill on August 27th were among 7,000 sailors living at the huge, crowded barracks on Commonwealth Pier while waiting to ship out. In these conditions, the virus spread with ease. On the 28th, eight new cases appeared; four days later, 106. While most of the men were suffering from the fever, cough, and aches that usually accompany the flu, 10 to 20% had symptoms that often proved fatal — high fever, chills, vomiting, delirium, blood spurting from the nose, eyes, and ears. Autopsies on patients who died within 48 hours of contracting the disease revealed lungs so full of blood that they sank when placed in water.

There were two waves of the 1918 pandemic. While highly contagious, the first wave brought a mild and forgettable disease that began in Spain in February. The Boston outbreak was the beginning of the second and deadlier wave, which would kill millions of people around the world. No disease in human history — including the Black Death (1347-1350) — caused so many fatalities.

While most of the men were suffering from the fever, cough, and aches that usually accompany the flu, 10 to 20% had symptoms that often proved fatal . . .

At first the fact that a highly infectious, deadly disease was spreading went almost unnoticed. The Boston Globe stated that doctors had the flu "pretty well in hand" on September 13th, the same day the Navy reported 163 new cases. At Fort Devens, an army base 30 miles west of Boston, 12,604 cases were recorded in just two weeks; in Boston, children jumped rope and sang:

"I had a little bird

And its name was Enza

I opened the window and

While the public was slow to realize the danger, the situation was increasingly grim. The hospital at Fort Devens, built for 2,000 patients, struggled to accommodate 8,000. The U. S. Surgeon General was sufficiently concerned to send Colonel Victor Vaughan, a respected epidemiologist, and Dr. William Henry Welch, the dean of American medicine, to the base. Vaughan described a terrible scene: "Every bed is full, yet others crowd in. The faces wear a bluish cast; a cough brings up the blood stained sputum. In the morning the dead bodies are stacked about the morgue like cord wood." The usually unflappable Welch was alarmed, too. "This must be some new kind of infection," he said after observing an autopsy. "Or plague."

The usually unflappable Welch was alarmed, too. "This must be some new kind of infection," he said after observing an autopsy. "Or plague."

By late September, nearly 50,000 people in Massachusetts had the flu, and the illness was spreading rapidly to other parts of the nation. The situation was so dire that the Army canceled a draft call despite the fact that it badly needed more soldiers in Europe.

Overwhelmed public officials did their best to contain the disease. In Philadelphia, which was particularly hard-hit, health officials campaigned against coughing, spitting, and sneezing. Other communities took more desperate measures. In Prescott, Arizona, it was illegal to shake hands. San Francisco required residents to wear gauze masks —completely ineffective against the microscopic virus — and police arrested people who did not comply.

By late September, nearly 50,000 people in Massachusetts had the flu, and the illness was spreading rapidly to other parts of the nation.

Where did such a virulent strain of influenza come from? Rumors and theories abounded: The germs were inserted into aspirin made by the German company Bayer. A camouflaged German ship had released them in Boston Harbor. Germans sneaked ashore and let loose vials of germs in theaters and other large crowds. The health commissioner of Denver had a novel explanation; he blamed the city's Italian immigrants.

Physicians searched frantically for a vaccine to prevent the flu and for ways to treat the symptoms. Medical authorities even conducted tests on volunteers at a military prison on Deer Island in Boston, promising pardons to those who survived the experiments. Ultimately, all such efforts were unsuccessful. There was nothing to be done except keep patients hydrated, rested, and warm. Researchers would not identify the virus that caused the outbreak until the 1930s, long after the epidemic had ended.