We had been in our sixteen-foot outboard motorboat, floating easily in the main street of Hadley, unloading into a purring truck the last of the marooned folk from the West Street area.

Tonight the angry Connecticut was intent on making a new path across the fields. Already the West Street common was a vast waste of water – three feet deep on the highway, nearing the piazza roofs farther down the street – rising a foot an hour. Out beyond, on the main highway to the river, all the women and children had been picked up. Only a handful of hardy men remained.

"McGrath's the nearest. You might get him. But you'll never make it."

We looked at each other. Leave a man out beyond with a wall of water due to strike in two or three hours?

The motor coughed, settled into its steady hum, and we slipped down the main street, our search light shooting its white ray a half mile through the gently falling mist. A mirror -faceted highway sign gleamed six inches above the water beside the road. We were on Route 9.

Across the West Street common we hit the current – a sullen, relentless movement of water farther than a man could walk. The motor stepped up to full speed.

McGrath' house came out of the darkness…

He took his place in the boat. We waited for a lull in the ice cakes and were off into the current. Again, the full high-pitched hum of the outboard above the roar of the waters! Again the search light cutting its white path through the blackness. We were in the full current now, headed diagonally upstream, but we made no headway. Slowly we were being beaten across the highway, backward. In a moment we were in the top of an apple tree, our starboard pushed against its bare branches, which formed a yielding cushion against which we gently swayed. For half an instant we hung there … and then the ice was upon us. An unseen hand reached out and turned the boat over as quickly, as easily as one might turn the page of a book. In a second [their boat] had vanished in the blackness.

[The men spent the night in the apple tree.]

"Suddenly around a bend we sighted a boat – a surf-boat manned by eight oars. WHO COULD BE with that outfit? We looked again. Hart and Hannigan! Hart recognized us first and raised a mighty yell, "My God, it's the Moodys! Come here till we kiss you!"

im doing a project on natural disasters in mass. if anyone has any information or authentic pictures, it would be very helpful. please leave your email address if you have anything. thank you.
info/pictures?

I, too, wished there were more images or links to images from all of the MassMoment stories. If you are still looking, I would try the Daily Hampshire Gazette newspaper archives. The newspaper does not maintain online archives older than 1994, so I guess you need to make a general search or to dig into a library's microfilm collection (hopefully digitized for easier viewing). ------------------------- AndiL
aftermath of devastation

The depression era; yet so many people in this tragic event came together and some were given jobs to alleviate the hardships for the affected population. This article could disclose what sources provided the expense for clean-up; who paid the wages to those hired to clean, sew, and restore Springfield.
Damage estimate

That damage would be over $3 billion today. http://www.measuringworth.com/uscompare/ ------------------------- James Hayes-Bohanan Professor of Geography Bridgewater State University
AFFORDABLE HOUSING IN BOSTON

WHY ARE HOUSING MARKET RATES SO HIGH IN THIS AREA? WHY ARE WAITING LIST SO LONG FOR AFFORDABLE APARTMENTS? WHO FOUNDS THE AFFORDABLE HOUSING ORGANIZATIONS THAT ADVOCATE EXAMPLE TENT CITY, INK-BLOCK, ETC....? ------------------------- Why are market rates so high to the point affordable housing organizations have to be part of every housing project? What happened to Mr King? and is the ink patricia simon

So you have a link from "Hadley" within this article. The link goes to an article about SOUTH Hadley, an entirely different town. Please fix this.

Good point!  Although Hadley is mentioned briefly in the "First Steamboat Passes Through South Hadley Canal," it is misleading. I have changed the link to a moment more directly connected to Hadley "Elizabeth Porter Phelps Born."

On this day in 1936, the worst flood in the state's recorded history inundated the city of Springfield. An unusually cold and snowy winter, followed by a spell of warm and rainy weather, turned the normal spring rising of the Connecticut River into an unprecedented natural catastrophe. Dams were breached, bridges knocked off their foundations, houses swept away. When the floodwaters finally receded, there was destruction everywhere. There were also jobs. The flood brought employment and business back to a town hard hit by the Depression. Springfield recovered, but no one wanted a repeat of the 1936 flood. Congress authorized construction of flood control dams all along the Connecticut River.

In Springfield,18 miles of city streets, most of them in residential neighborhoods, were under water. 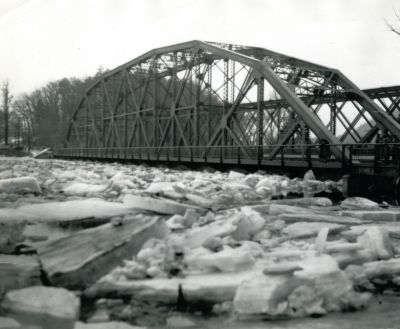 When the level of the Connecticut River first began to rise in Springfield on March 15 and 16, 1936, it was a tourist attraction. There were traffic jams by bridges as people flocked to see the swollen river with huge ice chunks cascading downstream. But five days later, when the river finally crested, the city faced a disaster. Once the crisis passed, there would be an economic revival.

Each spring, as snow melt swells the brooks and streams that feed the Connecticut, the people living along its banks expect the water to rise. But in 1936 unusual weather conditions turned the annual spring freshet into a deluge.

The winter of 1935-36 had been hard, with deep snowfalls and long cold snaps that turned streams and rivers to solid ice. Then spring came early, with mild March weather. The frozen river broke up into iceberg-like blocks —some as big as cars — that were carried downstream. In mid-March, New England was hit with torrential rains. The river — and rumors — began to rise.

On March 17th, enormous chunks of ice began ramming the Vernon Dam in Vermont. The next day, as the situation grew critical, radio and newspapers reported that the dam had not held. Panic-stricken people in Massachusetts envisioned a wall of water bringing battering rams of ice blocks down river. When the report was corrected — the river had crested in Vernon and the dam had in fact not "gone out" — the residents of western Massachusetts thought the worst was over. They were wrong.

The frozen river broke up into iceberg-like blocks —some as big as cars — that were carried downstream.

Between March 19th and the 21st, when the river finally stopped rising, the flood inundated Hadley, Hatfield, Northampton, Holyoke, and Springfield, as well as smaller towns and villages along its course. In Massachusetts alone, the Great Flood killed ten people and left 50,000 homeless. It was an unmatched natural catastrophe for the Bay State, causing over $200,000,000 in damage in 1936 dollars.

The bridges went first. On March 18th, the water rose so high in Northfield that the Central Vermont Railroad Bridge was simply lifted from its stone footings and washed into the river, where its ironwork spans sank to the bottom. The same fate befell the iron trolley bridge a few miles downstream.

The third bridge to be destroyed was the 800-foot-long wooden double-decker covered bridge in Montague. Built in 1866 of huge wooden timbers, the famous bridge was considered such an engineering marvel that its plans were kept at the Library of Congress. When the water lifted the bridge off its trestles, it did not sink; it remained intact as it moved downstream propelled by the force of 240,000 cubic feet of water per second. One resident watched from his porch as a huge structure came around the bend. At first he thought it was a barn, then he realized it was the Montague bridge. "It zoomed past us down toward Sunderland," he remembered, taking out other bridges as it went.

A dangerous barrage of debris — outhouses, chicken houses, trees, barns, and livestock — was sent barreling down the river.

Near Holyoke, where the river narrows under Mt. Tom, an ice dam 15 feet high and over a mile deep formed. When it broke up, the roar of the water could be heard for miles. At Holyoke and Hadley desperate residents tried, and failed, to create a sandbag dike to hold the water rising behind the Holyoke Dam. The river spilled over and around the dam, rushed through the village of South Hadley Falls, damaging or destroying nearly every building in the center of town. A dangerous barrage of debris — outhouses, chicken houses, trees, barns, and livestock — was sent barreling down the river.

The worst fate was reserved for Springfield. There, 18 miles of city streets, most of them in residential neighborhoods, were under water. City officials used radio and siren warnings to urge people to evacuate. Some residents feared looters and refused to leave their homes; many were later rescued from rooftops after surrounding houses were swept away. The 20,000 evacuees found shelter in schools, hospitals, fraternal lodges, even a monastery. On March 20th, the power went out and looting began. City officials issued a "shoot on sight" order to police. Flotillas of boats and canoes patrolled the city.

Unemployed men and women suddenly found there were jobs to be had shoveling, sweeping, even plowing mud from the streets, pumping cellars, and rebuilding houses, roads, and sidewalks.

Once the floodwaters receded, the city resembled a war zone. Railroad tracks were torn and twisted, streets and sidewalks washed out. Buildings had been ripped up and torn apart by blocks of ice and river debris. Perhaps the most depressing after-effect was the mud. The churning river had picked up tons of sediment and deposited up to three feet of mud inside buildings and on city streets.

After the devastation of the flood, the huge clean-up effort proved to be a boon to Depression-era Springfield. The Federal government stepped in with Works Project Administration jobs. Unemployed men and women suddenly found there were jobs to be had shoveling, sweeping, even plowing mud from the streets, pumping cellars, and rebuilding houses, roads, and sidewalks. Over 1,000 women were hired to make clothes for flood victims. With the first good wages they had earned in years, these workers were able to purchase replacement furniture, appliances, and clothing, helping to spur a much-needed economic revival.

The Great Flood of 1936 devastated the entire Northeast. From Ohio to Maine all major transportation came to a standstill. Over 170 people died and more than 429,000 were left homeless — 300,000 of them in Pennsylvania alone.

US Department of the Interior: The Floods of March 1936

"The Great Flood of 1936: The Connecticut River Valley Story," a film produced by Ed Klekowski, Elizabeth Wilda and Libby Klekowski in cooperation with the University of Massachusetts, Amherst (2003).

On this day in 1874, on the Mill River in western Massachusetts, an earthenwork dam gave way. A wall of water between 20- and 40-feet high and 300-feet wide rushed downstream. The flood destroyed almost...