From John Adams's Summation at the Boston Massacre Trial

I will enlarge no more on the evidence, but submit it to you. Facts are stubborn things; and whatever may be our wishes, our inclinations, or the dictates of our passions, they cannot alter the state of facts and evidence: nor is the law less stable than the fact; if an assault was made to endanger their lives, the law is clear, they had a right to kill in their own defence; if it was not so severe as to endanger their lives, yet if they were assaulted at all, struck and abused by blows of any sort, by snow-balls, oyster-shells, cinders, clubs, or sticks of any kind; this was a provocation, for which the law reduces the offence of killing, down to manslaughter, in consideration of those passions in our nature, which cannot be eradicated. To your candour and justice I submit the prisoners and their cause.

The law, in all vicissitudes of government, fluctuations of the passions, or flights of enthusiasm, will preserve a steady undeviating course; it will not bend to the uncertain wishes, imaginations, and wanton tempers of men. To use the words of a great and worthy man, a patriot, and an hero, and enlightened friend of mankind, and a martyr to liberty … "The law, (says he,) no passion can disturb. 'Tis void of desire and fear, lust and anger. … It does not enjoin that which pleases a weak, frail man, but without any regard to persons, commands that which is good, and punishes evil in all, whether rich, or poor, high or low, 'Tis deaf, inexorable, inflexible. On the one hand it is inexorable to the cries and lamentations of the prisoners; on the other it is deaf, deaf as an adder to the clamours of the populace.

Quoted in the Legal Papers of John Adams

There were two convictions.

Wikipedia indicates Adams defended "eight soldiers." Of the eight, "six of the soldiers were acquitted, while two others were convicted of manslaughter and given reduced sentences."
Login

On this day in 1770, Crispus Attucks, a black man from Framingham, and four other civilians were shot by British soldiers. Attucks worked on whaling ships and, between voyages, as a semi-skilled laborer around the port of Boston. There were many men—white and black—who resented the presence of the British Army, not so much as a threat to their rights as self-governing citizens but more as a threat to their already precarious economic position. They were ready to follow Attucks when he led them into a violent confrontation with a group of British Regulars. Although the soldiers were ac quitted on the grounds of self-defense, the incident has been known ever since as the Boston Massacre.

On March 5, 1858, black abolitionists gathered at Fanueil Hall for a celebration of the first "Crispus Attucks Day." 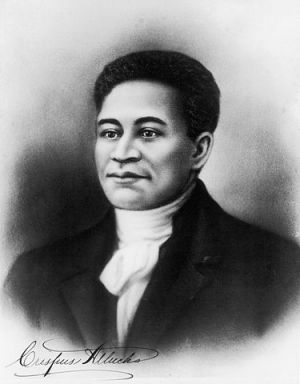 On a wintry evening in March of 1770, a group of British soldiers opened fire into a crowd of youths and men gathered near the Custom House in Boston. A number of the men were wounded; five of them died. The incident was labeled a massacre of innocent, unarmed civilians by bloodthirsty soldiers. Crispus Attucks, the first American casualty, was hailed as a martyr for freedom; he received a hero's burial attended by "an immense concourse of people . . . brought up by a long Train of Carriages belonging to the principal Gentry of the Town."

At least one member of the Boston gentry took a different view of Attucks and his compatriots. The young lawyer John Adams offered his services to defend the British soldiers. At the trial he characterized Attucks as a demagogue who turned a group of dockworkers, sailors, and Irish laborers into a dangerous mob. Adams asserted that Attucks instigated the trouble by marching his "army" up to King St. to provoke the soldiers.

John Adams was successful in portraying Crispus Attucks and his followers as "the most obscure and inconsiderable [mob] that could be found upon the continent" he won an acquittal for most of the British soldiers. But the victims of what became known as the Boston Massacre were remembered as noble men who sacrificed their lives for the cause of liberty. Patriots used annual commemorations to stir revolutionary fervor and build popular support for independence.

Crispus Attucks, . . . received a hero's burial attended by "an immense concourse of people . . . brought up by a long Train of Carriages belonging to the principal Gentry of the Town."

The reality? Crispus Attacks was typical of a large class of struggling laborers whose discontent made them useful allies to leaders of the movement to resist British rule. Boston's wealthy merchants were the first to suffer from and protest the new taxes the British crown began imposing on the colonies in the 1760s. The measures had little impact on poor laborers who owned little property and purchased few imported goods. But when the elite Sons of Liberty organized a boycott of British goods, it affected small shopkeepers, mechanics, and artisans alike.

The arrival of British troops in Boston in 1768 caused resentment among all classes of Boston society. Men accustomed to self-government were unhappy living in an occupied city, under the watch of an army whose job was to enforce the hated new laws. Middling folk worried that they would be forced to provide lodging for British soldiers, who had a reputation for profanity, immorality, and abuse of the Sabbath.

But it was the men who made their living from the sea who suffered most. Boston's many sailors feared being "impressed," seized by the Royal Navy and forced into service, and dockyard workers faced competition for jobs from off-duty British sailors. Ropeworkers were especially angered by the loss of work. For months tension mounted along the wharves as British soldiers traded barbs, insults, and punches with local sailors and maritime artisans, like Crispus Attucks.

The son of a black father and a Native American mother, Attucks spent the first 27 years of his life enslaved to a resident of Framingham. In 1750, he ran away; like many other fugitive slaves, he avoided recapture by becoming a sailor, serving on whaling ships out of Boston. When he was in port, he worked from time to time as a ropemaker.

"Come on you rascals, you bloody backs, you lobster scoundrels, fire if you dare, . . ."

Trouble began on Friday, March 2nd when a fight broke out between some British soldiers and ropeworkers. The Redcoats were overpowered, and they vowed to return to settle the score. The following Monday night, the soldiers left the barracks. By some accounts, they went into the streets armed with clubs looking for their adversaries; by others, they were simply on patrol.

It is unclear exactly what happened next. One witness reported that a barber's apprentice insulted one of the soldiers, who retaliated by butting the youth with his rifle. The boy shouted for help, and his friends responded. Someone rang the bells of a nearby church to sound an alarm. A crowd of townspeople quickly gathered. The ropeworkers — perhaps incited by fiery words they had heard from Samuel Adams—arrived on the scene just as the angry crowd cornered a lone British guard at the Custom House. The soldier called for help, and a small group of his compatriots came to his aide.

An angry crowd of almost 400 men began pelting the vastly outnumbered soldiers with snowballs and threatening them with sticks and clubs. The Redcoats leveled their muskets and bayonets in self-defense. Their captain instructed them to hold their fire. But then, according to most accounts, Crispus Attucks led the crowd forward, shouting, "Come on you rascals, you bloody backs, you lobster scoundrels, fire if you dare, God damn you, fire and be damned, we know you dare not." In the confusion, one soldier heard the word "fire" and thought his captain had given the command. He fired, and others followed suit, killing three civilians and mortally wounding two more, Crispus Attucks among them. The mob dispersed into the night.

the Boston Gazette published an account of the funeral for "the unhappy Victims who fell in the bloody Massacre."

Samuel Adams and other pro-Independence radicals used the incident to inflame anti-British sentiment in the colony. The following week, the Boston Gazette published an account of the funeral for "the unhappy Victims who fell in the bloody Massacre." An anonymous "Narrative of the Horrid Massacre in Boston" circulated in the city, along with Paul Revere's dramatic, if inaccurate, engraving of British Redcoats firing at point blank range on unarmed and peaceable colonists.

The men involved in the violent incident of March 5th were not peaceable citizens—at least not that night. With their livelihood threatened and their dignity insulted, they were quick to disregard the law. Their frustration fed the growing resistance to British rule.

Boston's Old State House is located adjacent to the site of the Boston Massacre. Visitors can learn more about the event and the American Revolution from the site's exhibitions and presentations.

On this day in 1773, the town of Bedford held its annual meeting. Along with the routine matters to be addressed, there was one unusual item of business. The Town Meeting was asked to decide...