First YMCA in the United States Organized in Boston

"Come and join us, you who feel weak, and timid, and only half alive, and we will help you. One must gymnasticate, or practice body-building work, if they would be saved physically. Many Christian men develop sickly and obese bodies, and then think it is the will of God if they are thus afflicted; when the Lord has nothing to do with the matter, it being their own fault."

On this day in 1851, a group of evangelicals from several Boston churches founded the first Young Men's Christian Association in the United States. Modeled on the YMCA in London, the chapter intended to safeguard young men who came to Boston from the vices of city life. It offered a safe gathering place, opportunities for exercise and socializing, Bible-study classes and prayer meetings. Future evangelist Dwight Moody, who arrived in Boston in 1853 from his family's farm in Northfield, wrote home about the Y, a place where he could read "all the books I want free" and hear "smart men from Boston lecture." In 1896 the Boston Y opened an evening institute for working men, the forerunner of Northeastern University.

In 1929 the Y purchased the old Red Sox field on Huntington Avenue and broke ground for the first university in the U.S. based on the work-study concept — now known as Northeastern University. 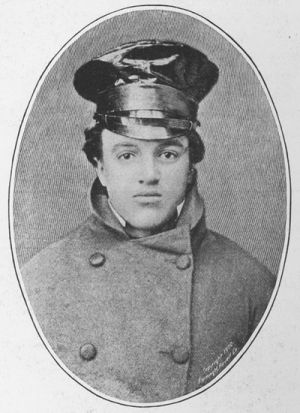 In the nineteenth century, reformers began to worry about the increasing number of young men who were leaving their family farms for jobs in the nation's growing cities. Whatever they had expected, many found harsher working conditions than they had known at home — 12-hour days, six days a week, spent indoors, in offices, shops, factories, or warehouses. Most lived in crowded tenements or rooms above the company shop.

Reformers were not just concerned about physical health; they worried, too, about the young men's spiritual well being. Away from their families and people they had known all their lives, they were easy prey for urban thugs, beggars, prostitutes, gamblers, and drinking companions. Who would protect their virtue and their Christian values? In Boston in the 1830s, evangelical churches sponsored reform and missionary societies to get sailors, apprentices, clerks, and other young men involved in Bible study groups and other religious activities.

European cities had similar problems. In the 1840s, a 20-year-old English farm boy named George Williams came to London to work in a shop. Appalled by the conditions he found in the city, he gathered a group of other young men to study the Bible and pray together; this first Young Men's Christian Association proved to be the beginning of a movement that grew rapidly. In less than a decade, there were 24 YMCAs in Great Britain, and the idea was spreading to other countries.

In Boston in the 1830s, evangelical churches sponsored reform and missionary societies to get sailors, apprentices, clerks, and other young men involved in Bible study groups and other religious activities. 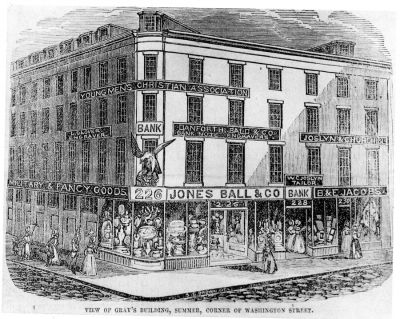 In 1851 retired Boston sea captain Thomas Sullivan heard about the new organization. Sullivan had long worried about the moral dangers awaiting young sailors on shore leave and had made an effort to expose them to Christian teachings. In December of 1851 he and six other men organized the first YMCA in the United States. Two weeks later, at Boston's Old South Meetinghouse, Sullivan explained that the group's mission was to "meet the young stranger as he enters our city, take him by the hand, direct him to a boarding house where he may find a quiet home . . . and in every way throw around him good influences, so that he may feel that he is not a stranger."

The Boston Y blanketed the country with 10,000 copies of its constitution. Before long there were Young Men's Christian Associations in New York City, Washington, D.C., and dozens of other cities and small towns. Although originally formed by evangelicals, the YMCA sought to overcome the rigid lines of separation between Christian denominations.

The first home of the Boston Y was a suite of four rented rooms in a building on the corner of Tremont Street and Temple Place. It had a library and reading room and a gymnasium. The Y also offered its members lectures, evening classes, social gatherings, excursions, assistance finding employment, and a register of respectable boarding houses. It would later provide inexpensive dormitory housing. And, of course, there were always Bible classes and prayer meetings.

. . . the group's mission was to "meet the young stranger as he enters our city, take him by the hand, direct him to a boarding house where he may find a quiet home . . ."

After the Civil War, the YMCA evolved in response to changes in the urban population. When European immigrants flooded into Boston and other American cities in the second half of the century, the Y expanded its membership and its mission to meet their needs. The Boston Y purchased a new building at Tremont and Eliot Streets in 1872 and in 1883 built a larger headquarters at Boylston and Berkeley Streets. From here the Y ministered to hardworking first-generation Americans and their children, helping them master a new language and gain new skills.

By the 1880s there was mounting concern among the leaders of the YMCA movement that office and factory jobs deprived urbanites of the exercise they needed to maintain their health and spirits. Classes were introduced with exercise drills, the forerunner of today's aerobics. In the late nineteenth century, the Boston Y constructed the first indoor swimming pools and launched a learn-to-swim program. Seeking exercises suited to urban dwellers, YMCA instructors in Holyoke and Springfield invented volleyball and basketball.

The Boston Y blanketed the country with 10,000 copies of its constitution. Before long there were Young Men's Christian Associations in New York City, Washington, D.C., and dozens of other cities and small towns.

In 1896 the Boston Y reorganized its popular series of self-improvement lectures into the "Evening Institute for Young Men." Demand was so high that in 1898 law classes were added, followed by business and engineering programs. Within 20 years the Y incorporated these programs into Northeastern College. Six years later the name was changed to Northeastern University of the Boston Young Men's Christian Association. In 1929 the Y purchased the old Red Sox field on Huntington Avenue and broke ground for the first university in the U.S. based on the work-study concept — now known as Northeastern University. Springfield College also got its start as the first training school sponsored by the Y.

While the Boston YMCA was breaking new ground, so was the local Young Women's Christian Association. When the YWCA opened in Boston in 1866, it was the first in the nation. Housing was a problem for young women as well as young men, and in 1884 the YWCA built a residence in the South End, a bold step for an organization run by women. The building included the first gymnasium for women. By 1900 the Boston YWCA was offering women training for jobs that required typewriting — a "revolutionary act that might," some critics feared, "lead women to forget their place."

"A Brief History of the YMCA Movement"

When in Boston: A Time Line and Almanac, by Jim Vrabel (Northeastern University Press, 2005).

On this day in 1895, a new game was first played at the YMCA in Holyoke. Many of the men who came to the Y were excited about another new game, basketball, but the Holyoke...

On this day in 1955, legendary pitcher Cy Young died. He spent much of his 22-year career in Boston, arriving in 1901 to play for the new American League team that would become the Red...