OPENING OF THE PROVINCETOWN EXTENSION OF THE OLD COLONY RAILROAD—AN EXTENSIVE CELEBRATION—SPEECHES BY DISTINGUISHED GUESTS—FESTIVITIES AT THE END OF THE CAPE—A BALL CLOSES THE DAY’S ENJOYMENTS.

The completion of the extension of the Old Colony railroad from Wellfleet to Provincetown and its opening to travel was celebrated, yesterday, by a dinner and ball at the end of the new road. The officers of the road extended invitations to a large number of distinguished men and provided an extra train to convey them to the scene of the celebration. The train left the Old Colony station at five minutes of nine o’clock having on board between one and two hundred gentlemen, . . .

After leaving the station nothing of interest occurred until reaching Wellfleet, the end of the old road. A commissary car accompanied the train, and in it a table was spread and kept constantly supplied with all the requisites for an excellent lunch. The trip from Wellfleet to Provincetown was a slow one, but the frequent stops and a slow rate of speed enabled the party to enjoy the fine agricultural country through which the road is laid, as well as the sweet odors from the relics of the people’s industry which were strewn along the shore. At every hamlet, all the inhabitants who had not “gone to the celebration” were seen out in front of their dwellings in order to catch a passing glimpse of the “steam cars.” . . . The road bed of the extension is about fourteen miles in length, and proved to have been excellently constructed, and the short runs of the train, during which a good rate of speed was obtained, were without as many “shakings” as would be expected. A few lumpy places were found, but these were being fixed as rapidly as possible. The view along the route is pleasantly varied by the sand hills which partially interrupt the view of the bay. The portions of the road from which a view across the bay of Provincetown is seen are very beautiful, and as a whole the ride is an attractive one, notwithstanding the sterility of the surrounding country.

The train arrived at Provincetown at three o’clock, and its arrival was welcomed by the ringing of the bells of the town and the firing of cannon from the top of High Pole Hill. . . .

The dinner train from Hyannis still runs and is a great time for nostalgia buffs. White tablecloth dining in the old style (food was very good, wine and champagne popping, and porters who want to be of service. We enjoyed this thoroughly and plan to go again! This was the evening train which is adults only. There is another train for people who want to travel with their families. I highly recommend this train for a great time..
Login

On this day in 1873, the first train arrived at the tip of Cape Cod. The streets were bedecked with flags and streamers as 13 bright yellow coach cars, filled to capacity, pulled into Provincetown. The Cape's traditional economy was in decline. Residents were counting on the railroad to bring better times. Summer visitors from Boston could now spend five hours on a comfortable train, instead of risking a choppy ride by steamer or enduring a two-day stagecoach trip. And they could stay in the large hotels that were built in towns all over the Cape. The heyday of the Cape as a railroad resort came to an end when cars became the preferred mode of transportation.

Summer visitors did not swim. The sea was a place of work, not play. In fact, even most fishermen did not know how to swim. 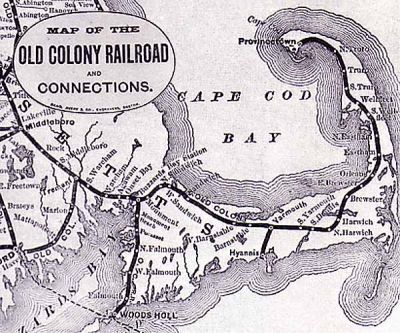 By the late 1850s, whaling, fishing, shipping, and saltworks — the mainstays of Cape Cod's economy — were all in decline. The region's population fell by almost a third in the half century that followed. Henry David Thoreau took four walking tours of the Cape between 1849 and 1857. He noted approvingly that it was "wholly unknown to the fashionable world." He realized, however, that "the time must come when this coast will be a place of resort for those New Englanders who really wish to visit the seaside."

That time came to the Cape almost as soon as passenger rail service did. In 1854, the Old Colony Railroad reached Hyannis. From there passengers could transfer to ferries serving Nantucket and Martha's Vineyard. The islands launched successful promotional efforts, giving tourism there a big head start over the Cape.

Cape Cod suffered from an image problem. Its reputation was as an unattractive backwater — a "wilderness of sand," as one popular guide book put it in 1875. Beyond Sandwich, lay nothing but "weird and wide-spread desolateness." Slowly, however, investors and promoters changed the public's perception of the Cape to one of quaint villages populated by colorful "Old Salts."

He noted approvingly that it was "wholly unknown to the fashionable world." 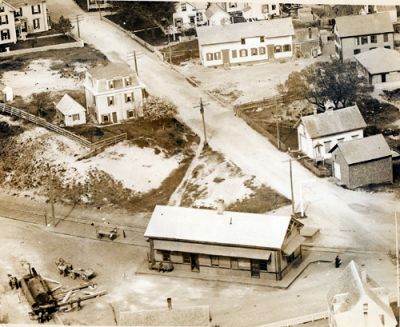 In 1865 the railroad reached Yarmouth and Orleans at the Cape's "elbow." It continued south to Falmouth and east to Wellfleet in 1870. The completion of the leg to Provincetown occasioned a major celebration. The first train was greeted by ringing bells and firing cannon; 800 guests dined beneath a huge tent erected near Town Hall.

For the early decades of the twentieth century, "the railroad was the focal point of the village, . . the main system of transport between Boston and the Cape, and our main link with the outside world," wrote one Hyannis resident. Now fish caught off Cape Cod and processed in Provincetown's cold storage facilities could be quickly transported to markets in New York and beyond.

Connections to the Cape improved as the American economy expanded. A growing middle and upper middle class had money to spend on vacations. The first resorts appeared in Falmouth right along with the first trains. Most of the Cape's early hotels were built along Buzzard's Bay and to the west of Hyannis, in Osterville, Cotuit, and Oyster Harbor. By the 1880s, Hyannis had become a popular upscale destination, although it remained a notch or two below Newport and Bar Harbor. By 1888 there were more than 100 hotels on the Upper Cape and rooms for 3,500 guests.

Hotels and inns came later to the Lower Cape. There was no hotel in Yarmouth, for example, until after 1900. But by 1920, hotels had opened in Eastham, Wellfleet, and Provincetown.

"the railroad was the focal point of the village, . . the main system of transport between Boston and the Cape, and our main link with the outside world," wrote one Hyannis resident.

In affluent families, mothers brought their children for a month or the entire summer, while the breadwinner joined them for weekends and a week or two. They ate all their meals at the hotel, and activities were centered there, too. Guests played croquet and tennis, enjoyed evening band concerts, a stroll on the beach, perhaps an occasional sail on a catboat with a retired sea captain. Lots of time was spent simply sitting on porches, gazing at the sea and breathing the healthy salt air.

Summer visitors did not swim. The sea was a place of work, not play. In fact, even most fishermen did not know how to swim. Besides, swimming would involve the unseemly removal of multiple layers of clothing and the exposure of bare skin. The Victorian era would have to end before attitudes changed.

Just as the train brought change to Cape Cod in the second half of the nineteenth century, so the automobile would in the twentieth. On a hot August day in 1918, 23 horse-drawn vehicles and 559 motor vehicles came onto the Cape. On a single Sunday less than 20 years later, 55,000 cars were counted crossing the bridges that were built over the Cape Cod Canal in the early 1930s. (Today, more than 35,000,000 vehicles pass over the bridges each year.)

Gas rationing during World War II temporarily increased demand for rail travel, but after 1945, the number of riders dropped precipitously.

Visitors who came by car had the freedom to leave their hotel to visit neighboring towns, if not the whole Cape. Dozens of restaurants, teahouses, antique and craft shops sprang up. The large wooden hotels were prone to fires. During the dark days of the Depression, hoteliers lacked the resources to rebuild; a fire generally put them out of business. Even hotels that were physically intact found it hard to survive; 80 percent of American hotels filed for bankruptcy in the 1930s.

Gas rationing during World War II temporarily increased demand for rail travel, but after 1945, the number of riders dropped precipitously. Passenger service to Provincetown had ended before the war. By 1960 it was gone from the entire Cape. Freight trains continued running into the 1970s, when the tracks to Provincetown were removed and the state purchased the right of way. Cyclists can now ride 28 miles from South Dennis to Wellfleet on a "rail trail" built where the trains that linked Cape Cod with "the outside world" once ran.